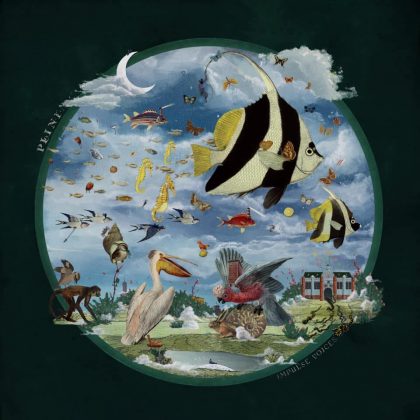 Instrumental guitar music is going through a second youth for a few years now. Indeed, facebook has played its part and youtube has hepled many musicians communicate their ideas, but if your music is not good enough, you will not stand out. Talking about great music, Australian guitarist Plini gained our attention with his debut album titled Handmade Cities. Four years later, he returns with a new album and now the ball is in our court to judge whether we are dealing with a shooting star or a phenomenon that will keep our intereset for a long time. Is Impulse Voices a record with substance and inspiration or is it a release aimed at future endorsements and increasing the number of followers on social networks? Let’s find out!

What Plini quickly realized was that instead of showing off his skills, he had to devote himself almost exclusively to composition and his own sound identity, and the result is that although Impulse Voices is just his sophomore full-length album, it’s filled with Plini’s personality who gives the impression that he’s a veteran in the field of modern prog.

His new album is an evolution of Handmade Cities, a little bit jazzier (The Glass Bead Game), but the music remains progressive at its core, composed exclusively by Plini of course, and recorded with his longtime bassist, Simon Grove. And what a production! Clean and balanced, so that no instrument overshadows the others. Chris Allison on drums has been added to this duet, creating the feeling of a full band. This somewhat old-school mentality is what sets Plini apart from the masses of social media guitarists.

The songs have this modern prog / djenty mood, but there are some influences from 70s prog bands. For example, Papelillo is kinda Genesis-meet-djent, and Ona_1154 is a wonderful mix of King Crimson and modern prog. Another interesting thing is that Plini’s songs are not built around a riff or a guitar exercise, but around a sequence of chords that are adorned with a bass lead or a piano melody. A typical example is Pan with the awesome saxophone solo and the incredible bassline. The always crucial guitar sound is clean and deep creating a trippy feeling, which does not tire at all, even in the djenty rhythmic parts. This is evident in the title track and Last Call. Especially the latter brings Vai’s style to mind and is in itself a masterpiece.

After listening to Impulse Voices, I conclude that what differentiates Plini from the rest of modern prog guitarists is that he does almost everything “upside down”. He does not use his incredible technique to play complex solos, but to write sweet and strange melodies. He does not expect his musicians to play just what he recorded, but lets them express themselves giving the feeling of jamming and improvisation. All in all, his charismatic musician has created one of the best albums of 2020, not just for guitarists.

Impulse Voices is the second full-length album of Australian guitar hero Plini. After the exceptional Handmade Cities Plini returns to further establish himself as a musician with a unique talent to combine melody, technicality and rhythm. Where this album excels is the songwriting. While the guitar is the main instrument in the 38 minutes of the album, there are complete songs here with a great rhythm section, the melodies and atmospheres completing the songwriting and even room for a sax solo on the track Pan (The sax-guitar solo interplay is exceptional). Most of the songs are less than 5 minutes long and they are quite different with each other giving the album variety and freshness. The djent rhythms of one track are followed by the prog rock and jazz influences of the next one making this album a versatile addition to any rock playlist. It’s “easy” for a guitar hero like Plini to create a completely technically sound album, the great win for him is his understanding of songwriting and creating albums that go a step further in his discography.

Elephant9 – Arrival of the New Elders