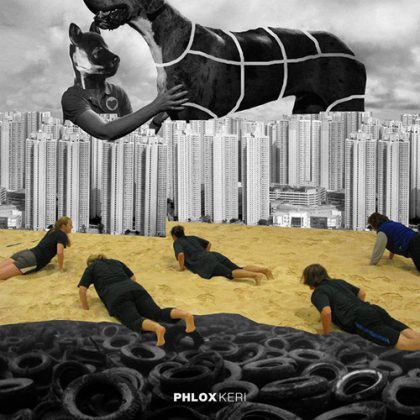 Phlox is not just any band. They play a unique mixture of fusion and prog rock and they come from Tallinn, Estonia. They were formed in 1999 by Kristo Roots (guitar), Raivo Prooso (percussion), Rainer Kapmann (drums) and Priit Holtsmann (bass). Although the line-up has changed a lot over the years, most of the members collaborate with ‘MKDK’, a jazz-rock / avant-garde record label. Fusion was released in 2000 and after that came Piima (2004) and Rebimine and Voltmine (2007). Their greatest album however till this day is Talu (2010), which marked a long hiatus which is fortunately ended this year with the release of Keri via MKDK of course.

Tidbits of fusion, wrapped in Canterbury

Keri is the 6th album these creatives from Tallinn in Estonia offer, following 2013’s live Vali and 2010’s Talu. 2017 finds Phlox keeping on with their energetic fusion of jazz-rock and prog still not sacrificing their “anything-goes” attitude as they seamlessly combine any pertinent influence that may serve their music. The band has now updated its core to quintet from originally a sextet while the sound palette is as usually augmented by an array of guest players. Kristo Roots [guitar], Raivo Prooso [bass], Kalle Klein [saxes], Madis Zilmer [drums] and Pearu Helenurm [keyboards] are responsible for one of this year’s finest releases.

Stylistically Keri does not divert much from the example set in the previous 3 albums, although I find it more introspective, a tad calmer and somewhat darker. I would say they derive their inspiration from all sorts of sources within their discipline, with a preference for the 70’s as a starting point. In that capacity one might hear tidbits a la Weather Report exploring fusion as that was challenged in Mahavishnu Orchestra’s The Inner Mounting Flame. But don’t get me wrong here. Equal parts of the album are borrowing from the message Hatfield and the North or Soft Machine’s Third and Fourth preached to the world. And should we throw some zaniness in the mix? That’s right, Picchio dal Pozzo’s eponymous album came to mind a few times. All these however are just passing references that I identify, I’m not saying this is canterbury fusion. Or am I?

I’m not. This is not a revival album, although it is not shy in referencing its influences. Contemporary jazz is also and still a strong asset and Kalle Klein is bringing forth significant gravity (I especially like his soprano playing). The album is strongly composed and the (not so many, at least the way I get it) improvised parts are not afraid in utilizing noisier moments to create tension. Beautiful melodies throughout this release, and do I sense some baltic folk music footnotes? The tenderer cuts show versatility as the band is not merely relying in muscle, and overall Keri is gaining in atmosphere especially as the album progresses. The songwriting and the execution is as strong as with the previous Phlox releases, while I think it is a bit more demanding here. I strongly recommend Keri to any adventurous music fan and it is definitely one of my favorite records of the year.

Seven years after Talu, this unique Estonian band returns with Keri. Jazz-fusion is the basis of their sound, but as always progressive rock and more avant-garde elements make their presence felt. The compositions are quite aggressive, dark and played at fast speeds for the most part, but they do not lack the necessary slower and somewhat more atmospheric breaks. Their lead melodies are distinctive and quite special and are their greatest advantage. They are even played by a variety of instruments, such as saxophone, violin and guitar, and some vocal melodies are sporadic. The experimental element does not overshadow the compositions and melodies since it works alongside them. Keri is an avant-fusion album with an emphasis on composition and friends of bands like Scherzoo and Niechęć will be delighted.