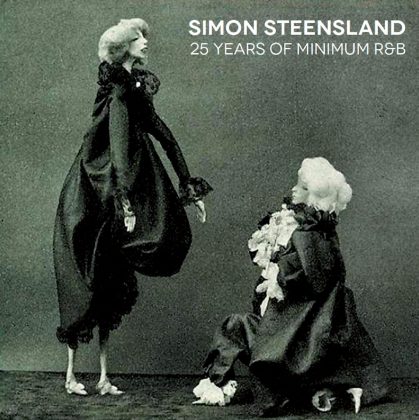 Simon Steensland is a very special case of a musician, admired by many of us at progrocks.gr. A reason that makes us write about him is the fact that he is so underrated. The Swedish avant-prog / RIO composer and multi-instrumentalist has worked with exceptional musicians such as the blind keyboard player Mats Öberg, the guitarist Joakim JJ Marsch and, of course, the extraordinary Morgan Ågren on drums. His albums are excellent for their inventiveness and boldness, with The Zombie Hunter (1995) and Fat Again (2009) being masterpieces, while his latest effort, A Farewell To Brains (2016) was a pleasant surprise for all.

25 Years Minimum R&B is a milestone in Steensland’s career, but it’s not a mere collection. There is too much original material here and maybe some (more) of the top moments in the catalogue of a sophisticated musical visionary.

Yes, this is a compilation and that alone should make me quickly turn away, but hey, that’s Simon Steensland, one of my favorite swedish composers – the other two being Lars Hollmer and Lach’n Jonsson. It’s a shame, but his previous works are largely out of print with seemingly no prospects of being reprinted and as such, they are reaching ridiculous prices. 25 years of Minimum R&B, besides being an absolutely hilarious statement of a title, offers a retrospect of Simon’s genius. For those who are unfamiliar, Steensland composes rather dark, brooding, powerful and at times harrowing music, not far from what Univers Zero or Art Zoyd are known for. Stressing to categorize it, I would label it avant-garde, RIO, Zeuhl and chamber-fused, while it is progressive with a punk attitude. Ultimately though, his music is uniquely and complexly distinct in its own right, something that could be attributed to him not formally receiving formal musical training – a fact he is proud of. A humble multi-instrumentalist, Steensland is looking inside out, accepting his spesh and incorporating it alongside his twisted sense of humour into masterpieces of modern music.

Yet this is not just a compilation. The first CD puts everything into a historical perspective, presenting us with tracks from Simon’s career excluding Fat Again and A Farewell to Brains, the last two albums that are still available on AltrOck. There is a reasonable flow throughout, with the tracks following no particular or sequential order. At times this sounds effortlessly like another Steensland album which I guess serves the purpose of this compilation. The remastering is handled by Morgan Ågren, who is also showing his extra-terrestrial drumming skills in many parts of this release. As such, the sound is much more dynamic and clear than the original albums with emphasis given on the lower-end spectrum. However it appears to be somewhat uneven among songs from different albums. So far everything is ok, just a little bit of history that should appeal to the newcomers but overall there is nothing new. It is the second CD that makes this release a real treat, for new and older fans alike.

Simon Steensland is a professional composer in his native Sweden, engaging mostly in theatrical scores for both contemporary and classic plays. However, his albums have gone pretty much unnoticed by his fellow Swedes while they are enjoying a somewhat cult status by fans worldwide who in turn, have no idea of Simon’s other musical identity. This is exactly the conundrum this release is trying to fix. As such, album outtakes, demo tracks, live recordings from the theatre, randomly recorded tracks, more compositions for the theatre, live recordings with the band, sequences for unfinished sequels, childish experiments and field recordings are all here. These I believe attempt to portray a glimpse of Simon’s duality while he’s balancing his hobby (his words, not mine) and his profession, allowing us to witness what’s on the other side for us. As much as they may sound incomplete and far-out, I would argue that it strangely feels like home here, being warm, welcome and as coherent as a nightmare. Just listen to the last track, a majestically dark chamber drone feat. shrieks and screeches produced by a nearby cemetery gate. Home indeed.

Consistent with his output, Steensland has released a token of his genius and superb musicianship. It is telling that he has been assisted by a multitude of highly skilled musicians over the years, like Morgan Ågren, Mats Öberg, Pelle Halvarsson or Erik Hammarström among others. Upon listening extensively to both the CDs I can’t help but ask why hasn’t this guy’s music been more exposed? And I am asking the avant-prog as well as the progressive rock fans. Those outside Sweden that are not aware of Simon Steensland’s body of professional work would be more than happy to buy his theatre music, while his “hobby” albums really need to be reprinted. He is one of the greatest composer of our time and I am sure that given time, his work will be more appreciated.

As a last note I have to say that it is really hard for me to grade this release being a compilation, but it certainly is a very edifying one. So for the purpose of this review, I shall give the first CD a 7 (because no compilation is enough) and a 9 to the second. So long and until the next one.

Simon Steensland’s dedication and consistency within the RIO / avant-prog genre is confirmed with this year’s release. This is a highly representative double collection. Its first part is covered with excellent track choices from his first five studio albums and a live, in other words his pre-AltrOck era. It reminds us of the maturity and integrity of his musical vision, which at such an early stage was the dominant element along with the unmistakable imagination and sense of mystery. Of course, the scarcity of this material makes it necessary, to say the least, to acquire 25 Years Minimum R&B. Together with Fat Again and A Farewell to Brains, we can now have a complete experience. The second CD includes unreleased music, essential and worthy of multiple hearings in the familiarly chaotic atmosphere of Steensland. There is not even half a superfluous note here, just plenty of talent that charms. It addresses with the same passion and responsibility both to the already initiated as well as to new listeners as a rich introduction to his work.