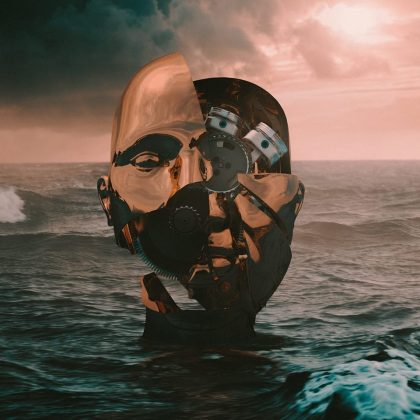 The supergroup that goes under the name Nova Collective was formed at the end of 2016 and consists of Dan Briggs (bass) and Matt Lynch (drums) coming from our beloved Trioscapes, Haken’s Richard Henselon on the guitar and one of his ex-mates from this band, Pete Jones on the keyboards. The first outing of the band entitled The Further Side became reality in 2017. It comprises of six songs and it seems to be a prominent event for those who are suckers for prog / fusion.

During the 47 minutes that Further Side lasts, a magnificent rhythm section that marries smoothness with heaviness, a keyboard player who is somewhere in between the acuteness of John Medeski, the lyricism of Chick Corea and the over-the-topness of McLaughlin and the telltale playing of Hensel with his full notes, blend ideally and with perfect harmony, resulting in an unprecedented musical imprint that lies precisely at the point where the functions of prog and fusion intersect, producing to our advantage six even compositions of definitely modern aesthetic and deprived of any shred of anachronism.

The technocratic approach of Nova Collective’s playing is crystal clear as it bounces safely from jazz to rock or prog metal paths. The compositions are characterized by high, yet babbling-free technique, built on musical phrases that unfold cinematically and tread on jazzy, classical-oriented and ethnic musical soundscapes which offer a special musical experience enhanced by pluralistic arrangements and a peerlessly clear production. The direction of the record – aside the echoes of the bands aforementioned that the contributors undoubtedly still purvey – balances between artists like Return To Forever, Gordian Knot, Liquid Tension Experiment and Hiromi Uehara. Among all these stuff, the typical prog outbreaks that keep resurfacing will surely catch the ear of the fans of the genre.

All of the above elements weave the veil of The Further Side which once the typical bewilderment of the first listen is behind (the prodigious skills of the musicians are the first to impress) it gets better because the deciphering of the musical content becomes all the more enjoyable.

The most impressive is the apparent potential of Nova Collective. It is a very promising outfit manned by young and talented musicians which is likely to mould a musical status of its own and earn a special place in the book of demanding listeners by releasing albums of equal quality and aesthetic as this one. The wish to claim and get what they deserve will accompany them.

When I initially heard of Nova Collective and the direction of their music, I was kind of reserved because technical prog ends up being nothing else but a show of musical skills many a time. Fortunately, this not the case here, on the contrary we have to do with an album of high compositional standards, where progressive metal meets jazz and improvisation. All of the cuts are carefully taken care of and don’t sound like leftovers of the main bands of the members. From Dancing Machines and its eastern scale to the 80s-electronic-tinged Ripped Apart and Reassembled and from the 70s prog rock Cascades to the “Asian” Air, The Further Side is redolent of melodies, cohesion, unique sound, contrast of feelings, constantly taking the listener by surprise and never wearing them out. Nova Collective gave birth to a magnificent instrumental album, one of the top releases of the current year.