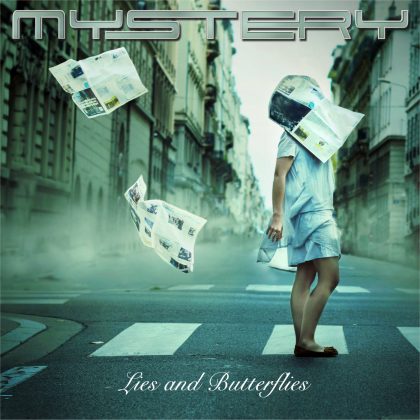 The recording history goes on for 22 years and progress has been the main element as a characterisation and a description of the music itself. With albums One Among The Living (2010) and The World Is A Game (2012) as their greatest releases, the Canadians are going through their creative peak during this decade. This year’s Lies And Butterflies certifies the high compositional level and the endless insiration of one the best neo-prog bands after Marillion.

On the cover, a girlish figure tries to cross the street at a deserted landscape, but a copy of a newspaper has covered her face and thus depriving her of her ability to see and consequently from going on. The allegory of the cover permeates the lyrics: modern man’s weakness to reach to the bottom of things and find something deeper by sifting through the vast volume of information that surrounds them. Lies and Butterflies voices the human longing for something greater in the every-day life that surrounds us, the need to find a sense in a deceptive world.

Aside from posing questions of such nature, the sixth album of Mystery is a very good addition to their catalogue. During their long course as a band, which typically was inaugurated in 1992 and spans up to this day, they had always been purveyors of remarkable progressive rock. With Michel St-Père as the steady core, the band from Canada presents a convincing angle how neo-prog should sound.

Looking for Something sets out the stall of the band’s typical features from the get-go. The melodic sound of the guitar raises the curtain, then comes the flute and finally Jean Pageau’s voice (in his second successive participation in a Mystey album) set the stage for a nearly 17-minute track. Its development, though far from original, is in harmony with the sentiment that oozes from it. In this intense atmosphere, the question Does anybody know? sounds like the climax of the agony that the lyrics of the song convey.

The next songs, significantly shorter in duration, are in line with the standards of the band: melodies are ever-present. Songs like Come to Μe or Dare to Dream are redolent with feeling, with Michel St-Père’s guitar work in the leading role. Mystery’s identity, forged by vintage prog influences from bands like Rush is mixed with AOR and in shorter songs they prove that they know how to handle progressive music to the benefit of the composition keeping superfluous elements at bay.

The last song entitled Chrysalis is the longest –and probably the best- track. The prolonged, relaxed intro changes gear at around the fifth minute where an almost metal riff kicks in. From that point, the music sounds very intense while the keyboards at the background provide an almost epic shade. Melody gradually edges its way back, giving an ethereal feeling to the song. The butterfly’s journey towards self-awareness goes on and as it reaches its final destination sweeps the music to striking forms. The album closes superbly, leaving the impression that the knowledge is imprinted, freedom is now a must.

Lies and Butterflies doesn’t break new ground in the progressive music firmament, most of the things that take place recall memories of the past. Nevertheless, the way Mystery incorporate their influences in their music and the way they craft those influences to spawn melodies and sentimental songs, is praiseworthy. The album is recommended to those who seek unpretentious music which can convince the ears, but also the heart of the listeners.