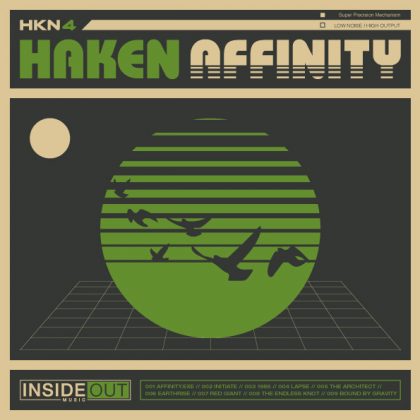 To what degree could progressive rock be related to the 80s? The answer could be “to a great degree”, as paradoxical as it might sound. This is what obviously Haken had in mind when they started creating Affinity and it even seems that they focused on the most pop side of the music of this decade. The truth is that I could not imagine what effect the pop of the 80s could have on progressive metal of today. Affinity is an album with a retro atmosphere and modern sound at the same time. The band then chose to go a decade further than The Mountain, the top of their work so far, and with EP Restoration as a stopover, they serve us their new album, released this year by InsideOut.

Second best to The Mountain maybe?

The album begins with the instrumental Affinity.exe, which is an introduction to Initiate, in which heavy riffs alternate with the melodic voice of Ross Jennings. The song was the first single of the album, but do not stay there, as I would say that there are others, much better. An example of this is 1985 which gives the tone of the aesthetics of 80s, from the introduction to the electronic drumming and the synths. Without wanting to underestimate the rest, Diego Tejeida does generally the best job, with his keys in this album, which is perhaps necessary for that style. The next track, Lapse, has nice flow, with the drums setting the pace and a good guitar solo to complete a clean-Haken-ish track. The Architect which follows, the magnum opus of the album, is what all progressive-metal fans will probably love. This piece has great diversity, since in its almost 16 minutes it involves many different parts together, with variations of intensity in down-tempo landscapes and places with digital voice and the brief, but key guest participation of Einar Solberg of Leprous (you will recognize him immediately!). The guitar closes in a fantastic way The Architect, although I must admit that I personally stuck to the point with the atmospheric solo of Conner Green’s bass, giving a futuristic timbre to the piece. Earthrise, which follows, could easily become a radio hit due to its short duration, but also to the pleasant, almost dancing tone. Very good work has been done to the next track, The Red Giant, which won me with the strange orchestration, while The Endless Knot again raises the intensity with its vigor. The album closes with a lovely ballad, Bound By Gravity, beautifully executed with ethereal atmosphere, while the feeling that comes out of it, takes you to places without gravity. Generally, the order of the songs gives coherence to the album, and its closure takes you back to the beginning and vice versa.

The work done on the lyrics is quite impressive: one observes that the lyrics connect the pieces together (some lyrics are titles for other pieces) and develop the thoughts on the same subject. Haken use the planets and especially the earth and the sun -as displays the stunning artwork in its simplicity (In a dying sun, I’ll become affinity), but in green colours, giving a retro aesthetic of a computer monitor of the 80s to give reflections on modern society and the future of mankind in general (Gaia mourns her children / a march of progress in reverse).

Shall we be ourselves responsible for the disappearance of our species or is this something the universe has already forshadowed? Also, the phenomenon of the tides caused by the Moon is dominant, inspiring correlations for human mortality (Some say that time and tide will wait for no man … The lunar path dictates the tide, will we ever reach the shoreline?). But through the gloominess of these thoughts comes the prompt for a less narrow-minded world (nothing can change until the floodgates and the doors of perception have swung open wide) and of course hope: bless us with the gift of a morning that lightens the day, infecting us with hope…

Haken dared and everything indicates that they handed us one of the best albums of the year for the progressive metal so far. All this combined with the consistent and targeted work by Jens Bogren (Opeth, Devin Townsend, Between The Buried And Me) in the mix leaves no room for less…

The emotions Affinity leaves you are mixed. It contains some very good compositions, such as the retro 1985, the excellent The Architect with its dark atmosphere and its guitar dynamics, and the modern upbeat with djent powdering, The Endless Knot. On the other hand, in many parts there is a monotony accompanied by “mellifluous” compositions or cheesy ones, as the English say. Affinity is safe, predictable and fatally retains its quality without irritating your ears further.