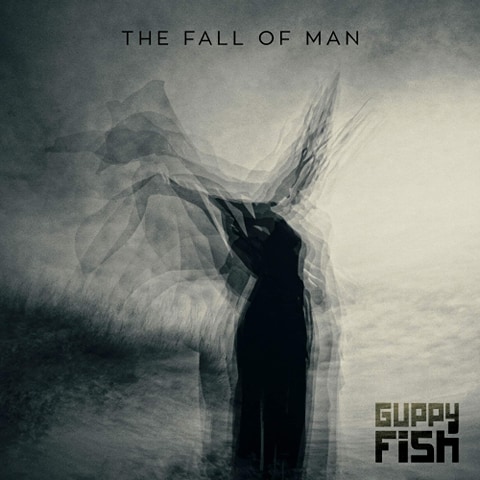 The Fall of Man is the full-length debut album of the Athenian prog rockers with the peculiar name Guppy Fish (tropical fish with vivid colors). They have been active for almost a decade, and in 2014 they released their EP entitled Constant Motion of Vanity. This was followed by some concerts and line-up changes. With the solid creative duo of Kostas Kokkalos (guitar) and Manos Tzanoudakis (vocals, piano, keys – some people may remember him from the psych / prog debut of Lemonade Influence), Guppy Fish are back, hopefully for good.

It may have been six years since the band’s EP, but both the mixing and mastering as well as the density of ideas in The Fall of Man show that Guppy Fish had been carefully preparing for their next step.

There are 9 very beautiful compositions on the album, including solid, dynamic tracks with heavy elements (e.g. the title track, Easily Played, the wonderful I Don’t Like Your Face) as well as heavy prog instrumental interludes, such as Above the sky (part 1), and lyrical compositions with a dark atmosphere and choral parts (e.g. the truly wonderful Exposed, -the best song on the album in my opinion – Neverending Flow and Justify among others).

From the first album hearings, one may identify Porcupine Tree and Steven Wilson’s solo work, as the band’s greatest influence. And this is partly true. The atmosphere, the lyricism, the vocals and the heavy outbursts, the structure of the compositions and the musical approach are reminiscent of Wilson’s works. But by no means do Guppy Fish just stay there. A well-trained listener will identify a diverse range of influences, from 70s prog rock and psychedelic / trippy elements to alternative / grunge rock from the 90’s in some turns and in playing attitude, but all this is combined to create the band’s own musical language and that’s a real achievement, especially considering this is a debut album.

The maturity with which the compositions are built is impressive. They’re never tedious, never repeated, with no unnecessary self-indulgence, but with a strong rhythm section (Xenophon Tsantilas – bass, and Vangelis Kardamitsis – drums) and some magnificent guitar improvisations (Kostas Kokkalos teaches essential and melodic guitar playing throughout the album). If anyone wants to know how to bring a melodic climax to a song with a guitar solo, he/she should listen to Easily Played. That’s how it’s done. And when it comes to escalating, the essence of the album lies exactly there. Many compositions are built gradually; they take their time and lead to a heavy escalation or a lyrical climax, an element of unquestionable quality. For example, the keyboards in Exposed add a psychedelic element, while the piano in Neverending Flow, Justify, Still Life and Above the sky (part 2) which closes the album ideally (Manos Tzanoudakis – keys and vocals), create dark and ethereal soundscapes, leaving the atmospheric aftertaste and the required variety for a solid album.

The negative elements include perhaps the somewhat Greek accent in some places, e.g. in Still Life, and the persistent choice of “atmospheric” vocals, which cast a one-dimensional shadow on an otherwise multifaceted album. Of course, that doesn’t mean that Guppy Fish’s debut isn’t adorned with great vocal melodies, especially in the aforementioned Above the sky (part 2) and in the excellent I Don’t Like Your Face, which winks to the great stuff created between 1985-1995 by Alice in Chains or Jane’s Addiction, before being completed in an emphatically progressive style. In my opinion, this is the guide for the approach and diversity of their vocals in the future.

Overall, an excellent debut by a band that introduces itself confidently and has nothing to envy from anyone, anywhere.

Guppy Fish impressed us in 2014 with their debut EP and their prog rock / alternative metal sounds. It made them one of the bands “to watch” in the growing prog rock scene in Greece. Six years later they offer us their first full-length album entitled The Fall of Man. Once again, they present dark prog rock songs heavily influenced by Porcupine Tree and Riverside. The songwriting and the artistic expression shows how much the band has grown in these six years. The intriguing guitar and keyboard themes in songs like the opener, The Fall of Man, or Exposed are a great example of their growth. The rhythm section does more of the heavy lifting in the heavier Still Here or the more direct I Don’t Like Your Face. Neverending Flow has a more intense Spock’s Beard / Neal Morse feeling with the piano-based intro and the guitar leads. The ominous Justify changes the mood again and sets up for the proggier Above The Sky, probably the most complete track of the album with a more psychedelic Floydian feel. While the potential that was showcased in the EP is still there, it feels like there is a missing element that would elevate the compositions. The album is filled with great musical ideas that somehow miss a connection that transform a good album into a great one.