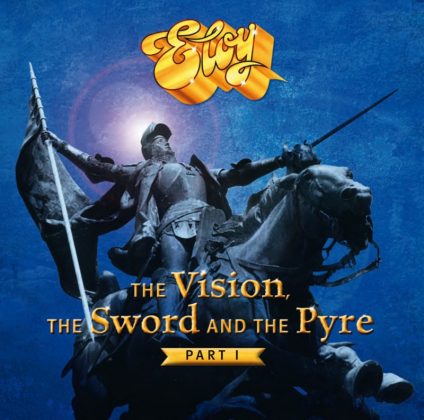 It’s impossible to write a brief introduction about the artistic significance and legacy of a band of the caliber like Eloy. The great – and particularly popular in Greece – German progsters with the guitarist and singer Frank Bornemann as the man on the helm have charted an enviable course with albums ranking from excellent to masterpieces, like Inside, Floating, Power And The Passion, Dawn, Ocean and Silent Cries And Mighty Echoes. This year’s release The Vision, The Sword And The Pyre (Part I) is the 18th and counting album of the band and it remains to be seen if it will live up to the unreachable summits of the past.

It stands to reason not to have high expectations from Eloy since they are going through the most unproductive phase of their career. It’s been 19 years since the release of the average Ocean 2 and the poor Visionary was the only in-between outing. Let’s not fool ourselves, our wish was an album that would pass muster and would do justice to the brand name they have built in the prog and not only firmament. Coming up with a concept based on the life and death of Joan of Arc was a sign of an ambitious project.

Unfortunately, after the first listens of the album it becomes clear that there is nothing ambitious in there. Cheesy keyboards, narratives, average vocals, flat atmosphere and lukewarm rhythmic parts are all over the place. Of course, the worst is that there is not a single moment to get goose pimples out of the music of the Germans. Honestly, the good moments are so sparse and fragmentary that they get lost in an ocean of mediocrity and uninspired compositions. The common ground with their previous opuses is located mainly in the previous triad (The Tide Returns Forever, Ocean 2, Visionary), less in the Silent Cries… to Metromania era and no common ground at all with their legendary albums back in the seventies.

Some tunes (Domremy of the Hundred Years’ War, Autumn 1428 at Home, The Ride by Night…, Orleans) are purposed just to  keep the flow of the concept going, whereas some others like The Age of the Hunder Years’ War, Early Signs… From A Longed For Miracle, Vaucouleurs, Chinon, The Prophecy and The Sword, aside a handful of interesting moments, bathe in mediocrity and drabness. The only songs that barely stand out are The Call that kicks off with a guitar riff that recalls The Zany Magician, as well as the melodic Les Tourelles and Why? that bookend the album.

As the title hints, the second part of The Vision, The Sword And The Pyre will soon come out. My take of things it is that is highly unlikely that the band will turn around this disheartening impression the album has left and maybe it is high time they thought of calling it a day. I wish that the follow-up will be much superior to part one and the fall of the curtain will do justice to the name of this huge band.

The tradition of concept albums carries on relentlessly, only this time Frank Bornemann makes a detour and omits the fantasy stories and set his mind to engage himself with history facts that took place back in the 15th century. He delves into the role of the Roman Catholic martyr Joan of Arc in the Hundred Years’ War between France and England. Unfortunately, the value of the album is solely confined to the legendary band logo. Other than that, there are meaningless and uninspired compositions with aimless soundtrack-dialogues in-between, plus a lot of self-referential parts (I got many times the feeling that Bornemann rehashes the riffs of The Tides Return Forever and not only). The majestic space trademark of the band is clear and perpetual and that’s the way for every band whose ambition is to forge a sound of its own. But this is Eloy and therefore our expectations are pretty high. No, I do not lament, neither do I demand from the 72-year old affable German to put together the masterpiece of the century, rather I anticipate the second part in the hope that it will exceed by far this mediocre release.