After a prolonged hiatus, Fragile Vastness got back into action with the release of Perception, aiming for a new direction and with high hopes with regard to their future. In the context of the promotion of their new material, the gig at Modu Club marked their total come back to where the musical action is and it was a chance to introduce the new members that round out the retooled line-up of the band. The show was scheduled for Friday, September 29th and the bill featured two more bands which despite that they had few things in common with the headliners, they represent the flourishing Greek scene. 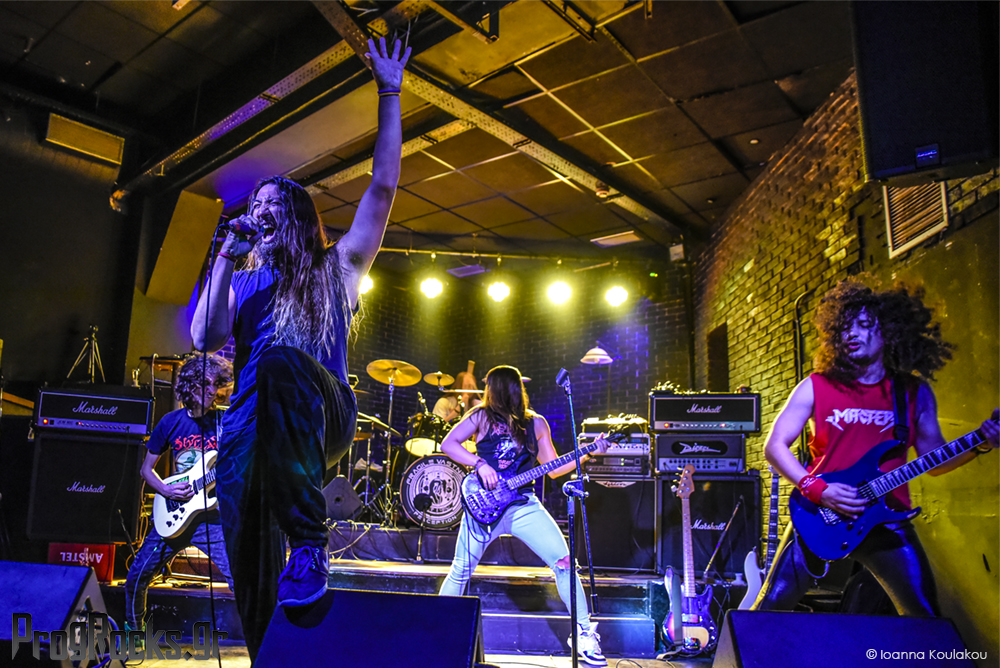 Around 21:00 when I entered the lovely venue of Modu, the first group had already set foot on stage and, as it became clear shortly after, their show was coming to a close. Judging by the part of their show that I witnessed and their stage presence, it was no brainer to figure out that Dreamrites were card-carrying Iron Maiden fans and also of the way that their music permeated the American metal. The restless singer who, like a latter-day Dickinson, had his foot on the monitor firing up the thin by then crowd (which was aware of their songs) swirled it into the sound of music that despite its well-trodden influences possesses the power to uplift the mood sky-high. Even though I was shortly exposed to their music, it did strike a chord with me and whetted my appetite to listen to their debut album that came out this year. The thought that classic metal is constantly refreshed with new blood lifted my spirits and a smile was formed on my lips. 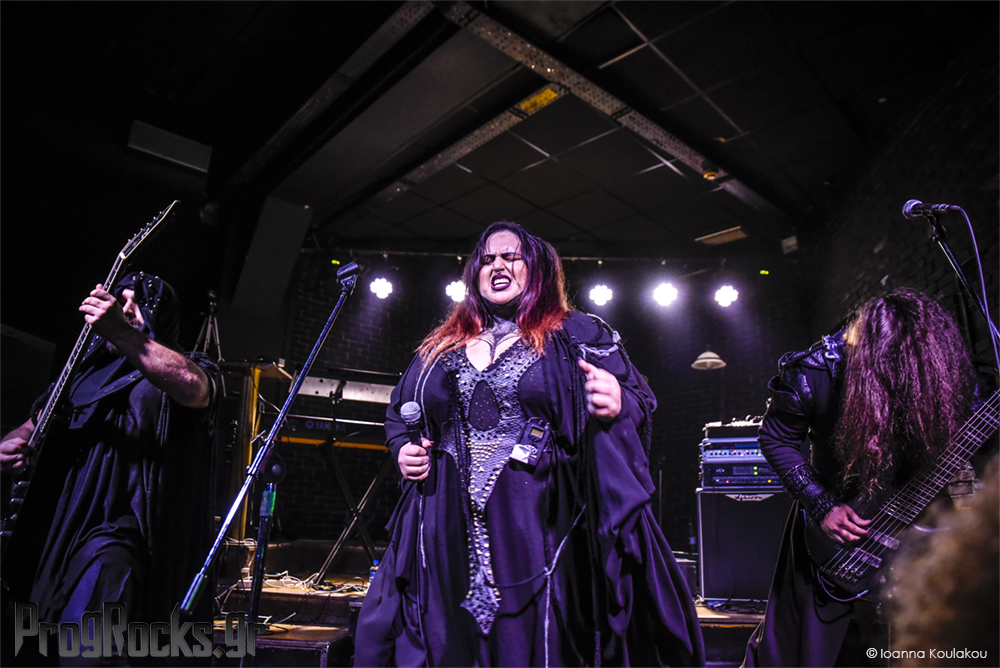 It took some time for the necessary stage gear changes before the time of Enemy of Reality had come. The band has acclaimed positive reviews for the two albums it has released so far, with the latter standing out thanks to numerous contributions by renowned musicians. Of course the voice of Iliana Tsakiraki which was introduced to a wider audience with Septic Flesh’s album Great Mass was familiar to me, but it was the first time that I would listen to their music. 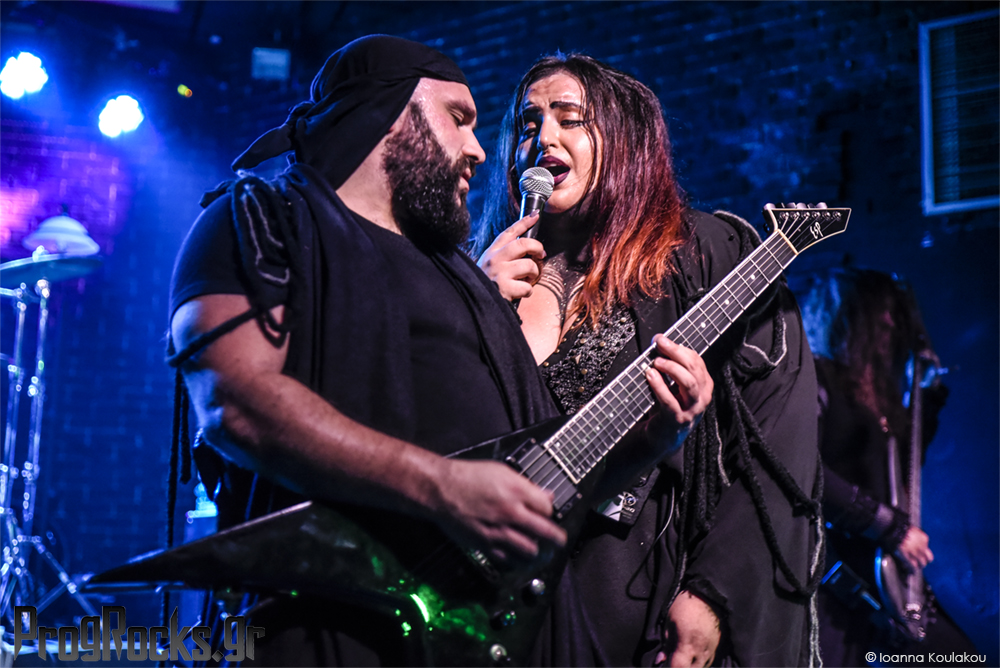 It was rolling on to 22:00 when they kicked off their set, and the venue was packed with people who seemed eager for their show. A skillful guitarist, a bassist devoted to his instrument and occasionally throwing in some extreme vocal parts, plus the talented singer of course, pulled off to stun the attendants. Their music is not my scene, yet their symphonic metal captured even those who were not acquainted with them. Their set drew heavily on their latest album Arakhne and Tsakiraki elaborated the concept of its lyrics. It is based on the ancient Greek myth and the allegories generated by it and she saw with her own eyes that the album is well received from the audience. The announcement that they will tour together with Therion, simply verified what we saw on stage: a promising band. 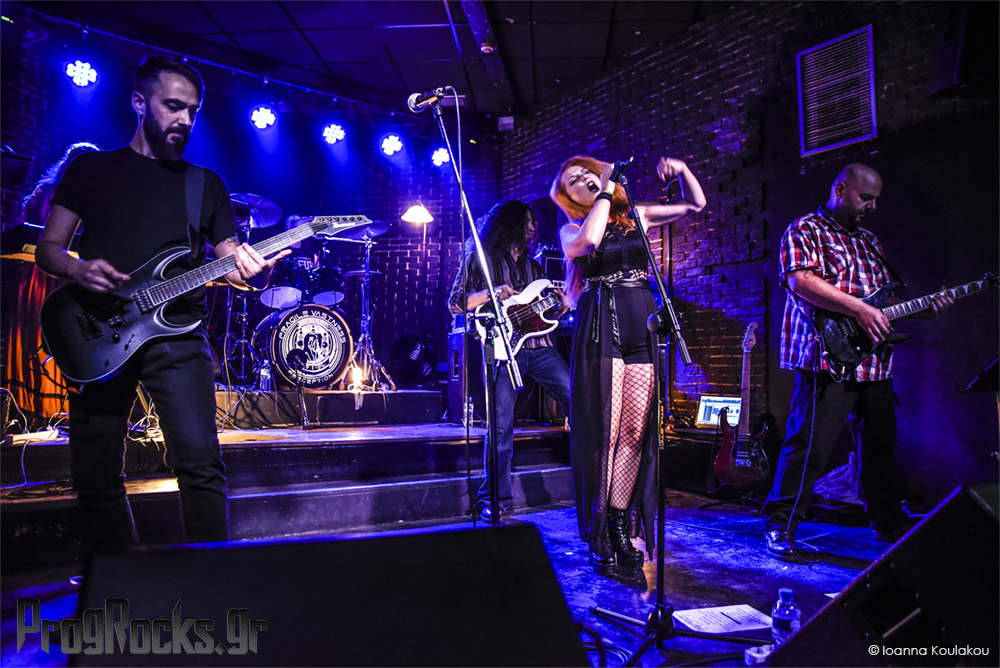 The lights of the stage went out once more as we waited for the guests of honour, Fragile Vastness. It was almost 23:00 when the band plunged into I Am Fire off their latest album. The dominating figure of Vangelis Yalamas in front of the drummer (Babis Tsolakis) and behind the two guitarists Vasilis Batilas and Alex Flouros, together with the discreet presence of Evi Katsamatsa and the hot-blooded Elena Stratigopoulou comprised a picture where the new and old coexisted in now. 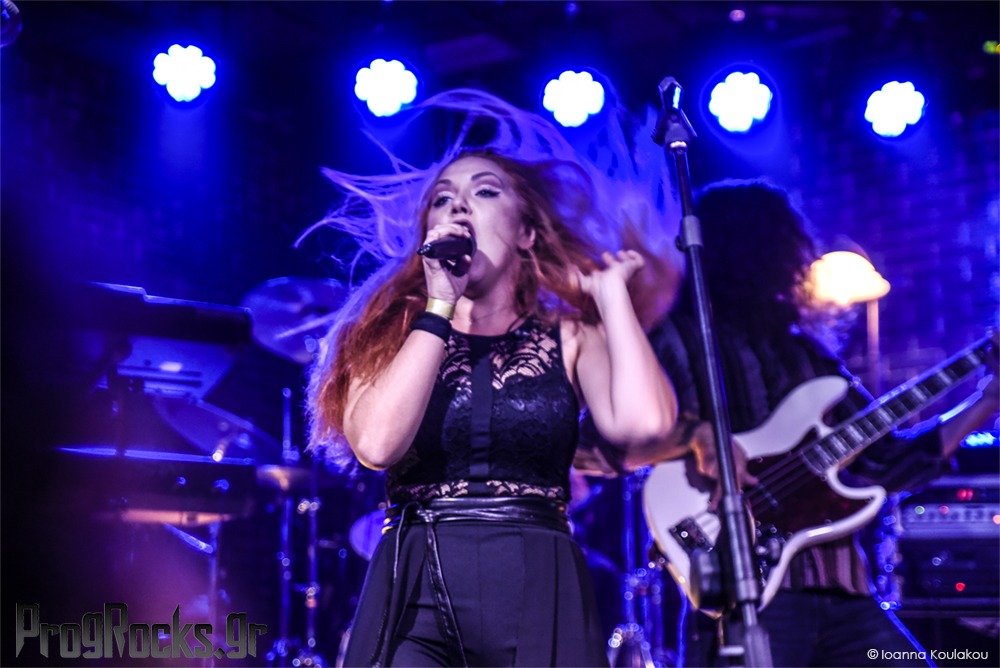 Perception was performed in its entirety and the band delivered in spite of sound hitches. The new proposal of Fragile Vastness convinced the audience of its quality, an album that might have caught their longtime fans on hop, but it lives up to the band’s legacy. Yalamas came out with his view that it is their crowning achievement so far and he also announced that its follow-up will be released in 2018, a statement that pleased the audience no end. Truth is, that the intelligent alt-prog they have chosen as a new direction fits them perfectly and it remains to be seen how important their latest album is. 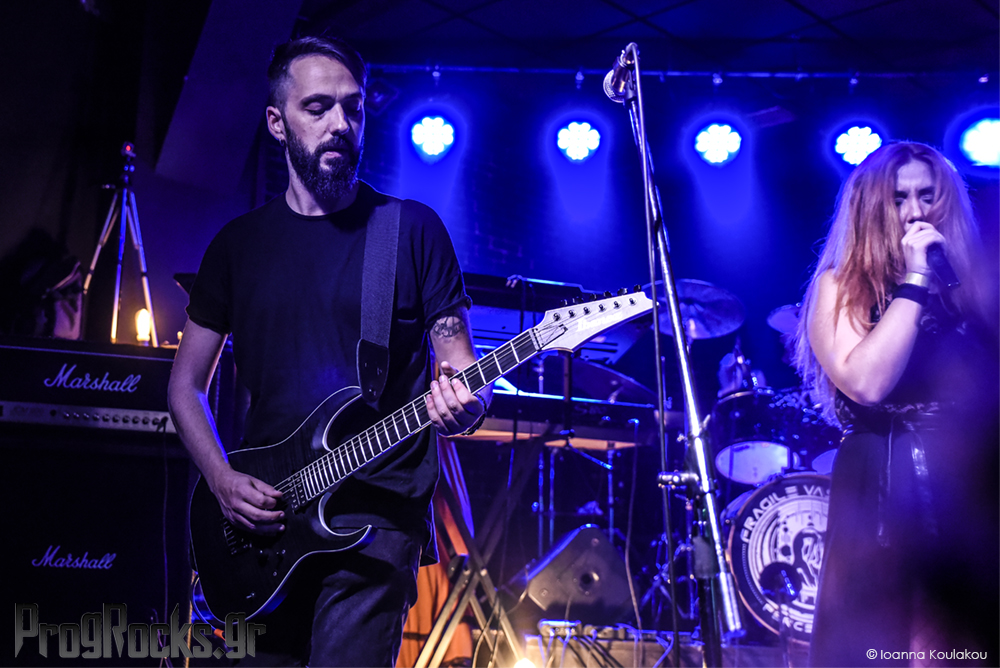 The end of presentation of Perception signaled the beginning for the best moments of the night, personally speaking. The time had come for past members of the band to join them on stage and prove that this aura still lingers on. The singer on Excerpts… Zacharias Tsoumos provided the vocals for two tunes off their debut album. His joy was obvious that he was collaborating to songs that he had contributed to their completion and gave a fiery performance with measureless gusto. 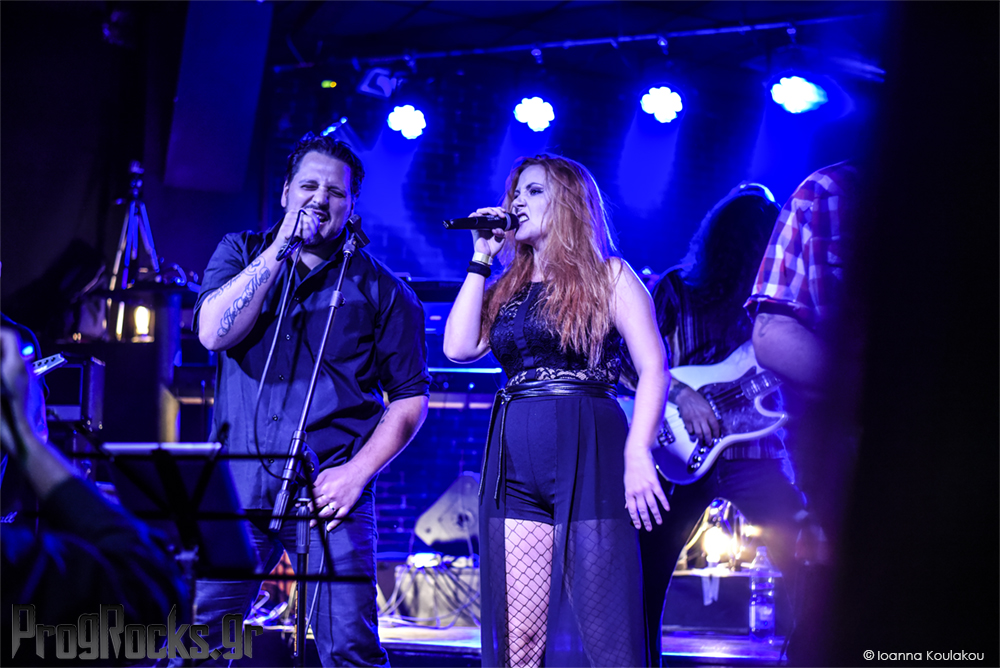 The second guest was the awesome George Ikosipentakis (today a member of Innerwish), singer on the legendary Tribute to Life, perhaps the summit of the Greek progressive metal. The sound of the band took a harder edge and the mood of the band members followed suit. Love and Loss was the spark and From East to West that carries pilgrims from the “Holy Land” set Modu on fire with its uncontrollable ethnic-prog rhythms. I swear I felt tears of emotion welling up…

The night came to its end and the commemorative photos depicted the vibe. 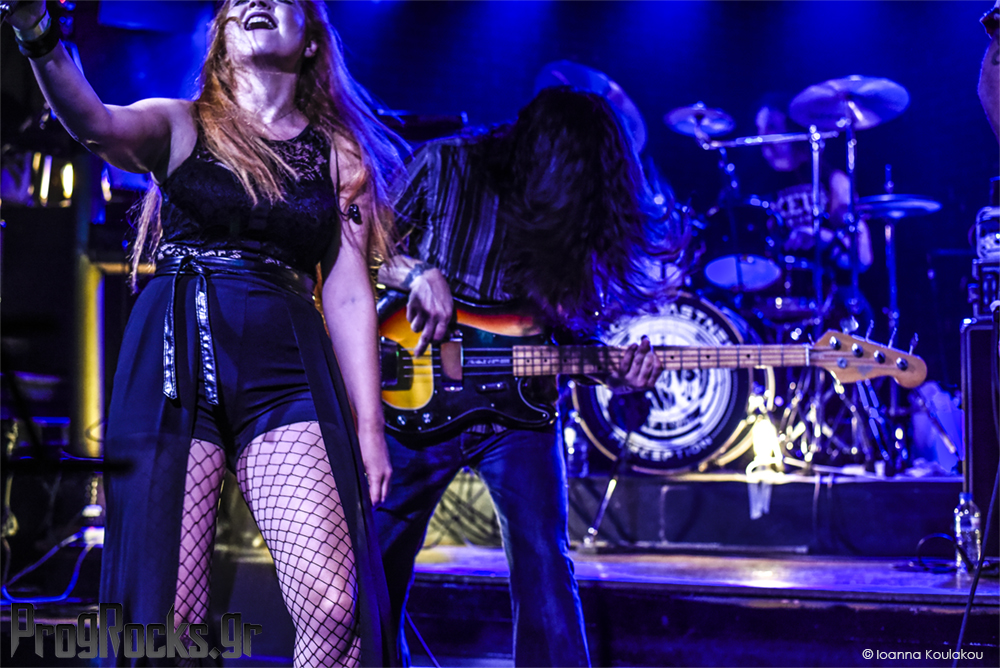 On my way home, Tribute to Life kept me company. At some point a thought occurred to me, how strange it is to listen to these songs 17 years since they were released from a band that I thought it was disbanded once and for all and get so emotional. I realized then, that perhaps this human invention of music was meant to follow another one, the invention of time, probably not to ease its corrosiveness but rather bestow meaning to it; albums that rivet us despite the merciless passage of time, embellishing our routine with colours immune to the clutch of mortality. With this thought, a wonderful gig was etched upon my memory.