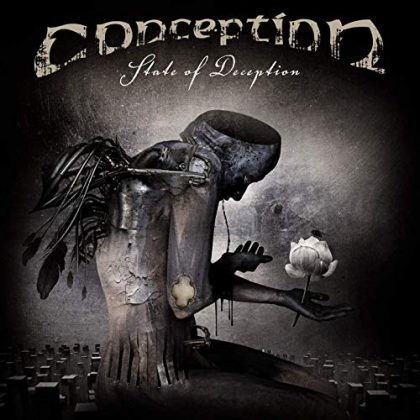 It has been more than 20 years since Conception’s last full-length album. These years have not been as flourishing for progressive metal as those when records like Flow were released. Regarding at least the traditional version of the genre, the stagnation and the inability to create such milestones was characteristic. The return of Conception is part of the circle of legendary bands (such as Psychotic Waltz) that seek a new opportunity in an environment that eagerly awaiting something special from the aura of the greats.

The 2018 EP Dark Symphony paved the way for the coveted comeback of the Norwegians, and this year’s State of Deception completes their return.

Not just another album in Conception’s discography, but a new statement

The general rule is that you cannot teach new tricks to an old dog and that you kill horses when they get old, but sometimes the will to live on and the appetite for evolution may offer some exceptions to the aforementioned general rules. The new album of Conception is such an an exception since the selfsame people produce something that sounds modern while using the same means, 20+ years after their previous full-length album was released.

State of Deception is the band’s fifth album and it includes all the main elements that made Conception what they are, yet it is not probably what you expect to get from them. Indeed, Tore Østby’s oriental melodies and wonderful solos are here, but they are shorter and with a somewhat complementary role. The same goes for Arve Heimdal’s tribal drums, only that they are interspersed with a more jazzy playing, while Ingar Amlien’s bass is a little more aggressive, but remains melodic and its role is prominent (due to the fact there is only one guitar). What has somewhat changed is Roy Khan’s vocals, whose voice carries a melancholy timbre, unlike anything he sounded like on the band’s previous albums.

All of the above can be heard right from the beginning of the album. Of Raven and Pigs brings out an anger reminiscent of Pink Floyd’s The Wall and introduces us to the new Conception. As the album progresses, the first heavy guitars appear in Waywardly Broken, a mix of Conception and Pain of Salvation, which I personally find wonderful because it showcases the evolution of the band members as musicians. The same goes for the more gruesome By the Blues and No Rewind, which could had been included in Flow if they weren’t so bulky. Of course, the album has its relaxing moments (Feather Moves and The Mansion), two solid compositions with Queensrÿche influences on which Khan unfolds his singing abilities while they retain the band‘s character. Special mention should be made of the best, in my opinion, track on the album, She Dragoon, which is also the proggiest. Here, Østby’s personality and his tenure at ARK are strongly evident in composition and structure alike. It is a high-tempo, guitar-driven song with great technical drumming that follows the guitar riff and the bass a bit pushed back back in the mix. It could well had been included in Burn the Sun.

So, how good is the record overall? It’s very good, not among the band’s best three, but it’s very close. And that’s a badge of honor for a band, 23 years after the previous full-length album with such great back catalogue under its belt. Of course, an even greater accomplishment is that Conception did not make a 90s record with a contemporary production, but a modern album influenced by the evolution of music and the standards they had set in the 90s.

The prior experience of Tore Østby and Roy Khan is reflected in the sound of the new album of Conception. Kamelot’s orchestral influences (as well as their somewhat plastic production) are implanted in the band’s classic sound, Østby’s guitar is reminiscent of ARK, and there are some new elements that add something quite fresh to their identity.

Sure, the record does not have the aura of their radical 90s releases, but this is par for the course. However, it maintains the band’s ability to exude a distinct sense of melody combined with heavy riffs and transubstantiate it into tracks like Feather Moves, By the Blues and She Dragoon. There are spots that exude something groovy and it’s a novelty in their sound, as the female vocals in The Mansion are. All of the tracks are well-crafted and accessible to any listener who prefers beautiful songs without insisting on their progressive strand. The return of Conception is not as astonishing as Flow, they play a bit safe but it is a successful comeback nonetheless.

It is, after all, a wonderful feeling to hear Roy Khan singing the band’s material which functions as a canvas coloured with his voice. It’s pure delight that after all these years the music of Conception remains at such a remarkable level.

Need – Norchestrion: A Song for the End

Sunday January 17th, 2021 Νέες Κυκλοφoρίες Comments Off on Need – Norchestrion: A Song for the End