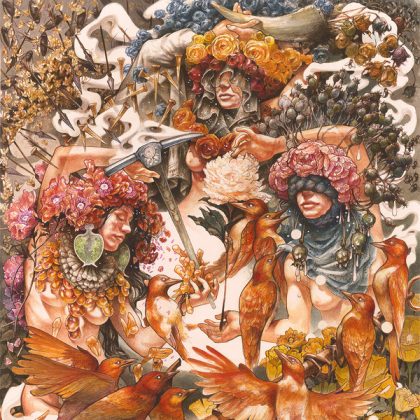 Since their first album, Baroness have chosen a different color for each their cover artworks, designed by singer John Baizley, with each color giving the name to each release. This year they’ve reached their fifth album which as usual does not deviate from the tradition and bears the colors of gold and grey.

This year’s colors are coming together with their predecessor, Pink, to paint the band’s path after the near-tragedy of 2012. The car crash which involved the band was crucial for the future of Baroness. However, they found the courage to continue with renewed potential and the belief that the band still had a lot to offer. Gold & Grey seems to be an allegory of that incident. Grey represents bad memories whereas gold reflects the future that may continue to be great.

According to the band’s statements, the theme of the colors closes with this album, which gives it a distinctive character but is mainly the content that ranks it among the most important points in their career. Although maturity is an abstract word that can hardly describe the phase a band is going through, in Gold & Grey we witness the band’s transition to something different than what we had known till this day. Next to the initial elements that have become increasingly restricted over the years, progressive and psychedelic music are organically added to the material on which the band’s contemporary sound is sculpted.

The sound of Baroness now becomes multilayered. Yes, the metal background is there, but with time, it is obviously receptive to new kinds and influences. The production of the album handled by Dave Fridmann, which has been widely debated and largely criticized by the public for its quality, aims to highlight the adventurous phase the band is in. An adventure full of emotions from post-rock/metal to the psychedelia that take time to be valued.

The album spans about an hour and its duration raises ambition and expectations for the songs. It could be a double album but even so there is something that separates the first from the second half. The first tracks are probably the heaviest. I am Already Gone and Throw me an Anchor are reminiscent of the early days of Mastodon. What is most striking about the hardness or not of the songs is the apparent devotion to the compositions. Their sound incorporates many new elements, classical orchestras, piano, elements that make the sound of Baroness stand at the most mature point of their career. Mastodon’s sound meets King Crimson’s archetypal genius, along with the melancholic melodies of Cure…

The feeling that the album is getting more and more experimental and interesting as it goes on finds confirmation in tracks like Borderlines and keeps the interest untouched. John Baizley’s distinctive voice gives the songs the distinctive seal of the Baronesses identity. Αfter this album, they have added a great deal of interesting stuff to their established style.

Gold & Grey was released in 2019, a year with only few good metal releases, unfortunately. The album is by no means a pure metal release but it does offer what is missing from metal to sound exciting again.

The tormented by fate Baroness are back with their fifth release and the last of the color spectrum themed albums. The seventeen (!!) tracks that the albums consists of might sound a like a lot but the total runtime is just over an hour and there is enough depth and variation to keep the audience interested. The addition of Gina Gleason as a guitarist and backing vocalist is the only difference in the line-up and she fits quite homogeneously with the band and this more evident by album closer Pale Sun where her vocals fit perfectly with John Baizley’s. The album starts with the “grab-you-by-the-face” Front Toward Enemy which is along with I’m Aldready Gone seem to be designed to be more accessible and somewhat radio friendly in order to work as an introduction to the record. However, the music is a bit rough around the edges which helps in giving the sound more identity. Delving deeper in the record there are many more atmospheric, spookier and psychedelic moments and generally experimental elements that make the album a very interesting listen.