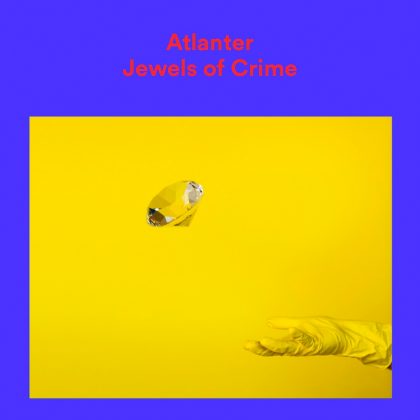 We have all heard of the expression “looking for diamonds in the trash”. Unfortunately, this is precisely the feeling the music digger often tastes in his search for new sounds, especially from the current scene. Inevitably, among the countless offers of artists, bands, albums and songs, there are few cases that will make you stop. Certainly one of them Atlanter from Norway. With their debut Vidde in 2013 they set the bar high by offering positive and melodic indie rock, which, however, relied firmly on the 60s and 70s. An unorthodox combination between Black Keys and Can could describe the style of the band, but only to a certain degree.

Vidde charmed a small, but demanding audience, entering to a few lists of the best albums of 2013. So, the wait for the second work of Atlanter was long and of course the requirements high. This year, therefore, their return is a fact, with the album called Jewels of Crime: a pop art cover in dazzling yellow and blue colours and the band being photographed sometimes with blond wigs and sometimes with gleaming futuristic sunglasses… Who knows what new strange idea is on the mind of our Norwegian friends?

Jewels in the dust

In their new album, Atlanter criticize the futility of wealth and luxury, highlighting the value of simple, often ragged, but absolutely genuine emotions. So, it is no coincidence that the album is entitled Jewels of Crime ends with the song Wear the Rag. As stated by guitarist and vocalist Jens Carelius: “we would like to present such an old-fashioned view, like a rock band in a kitschy, shiny and gaudy universe.”

This mentality emerges as fundamental as the band from Norway is searching for a rock sound, modern, artistic and at the same time rooted in the sounds of the past. Free from any superficial sensationalism, the band presents a more sophisticated view of the current trend of the most retro and analog alternative / indie rock, by creating a flashback to yesterday: first in psychedelia, in progressive rock and krautrock of the 60s and 70s onwards -going even further back in time- in dusty blues. After all, they call their musical style “viddeblues”, which in Greek can be translated as “wide blues” or, more correctly, “broadened blues”.

In essence, Atlanter develop the sound that presented in their debut, offering catchy melodies dipped into a sinewy, improvisational playing. The rich structure of the songs is developed carefully and in line with a clearly pop form. The result is tight rock songs that you can sing with a grin, beneath which restless cerebrality and experimentation are boiling. Light, Jewels of Crime and Jareeze are emphatical examples of the above.

Of course, one might think that the music of Atlanter having these features would deserve greater recognition. However, the band remains stubbornly uncommercial as they aim to the essential: the genuine feelings of friendship and love gradually acquire a -we would say- communal and even ritual depth. Thus, next to the blues influences, we find flakes of world music mainly from Africa, as in Let It Fade with an afrofunk staccato rhythm.

Rags instead of jewelry, companionship instead of fame, artistic concern rather than mainstream complacency: those are the ideas on which Atlanter set up their second album Jewels of Crime, achieving more than just impress the savvy listener and enter the highlights of 2016: they succeed in expressing a part of their generation, namely us.

Without any anxiety of comparison with the masterful debut, Jewels of Crime sounds like the natural next step forward. Adding pop / funk hit forms to dipped in 60s-70s positivity, the peculiar indie alternativity and their incompatible progressive experimentation, Atlanter confirm why they deserve to be regarded as one of the most interesting “things” in music today: they occupy a unique niche in the hearings of many -very different- ears.