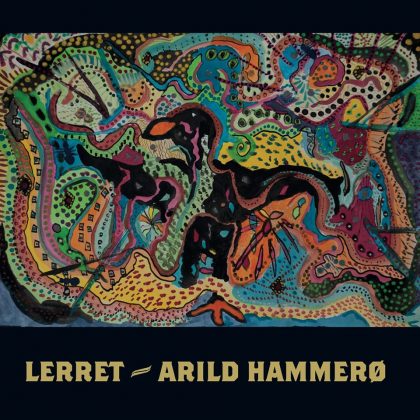 Arild Hammerø can only be an exception in the modern music scene, because he is an artist who has chosen to create in the old, traditional way, reminiscent of the songwriters of the 60s / 70s and the lovers of analog sound, consciously abstaining from the plastic sound “perfection” of our time.

Four years after Tenderton, Hammerø returns as a solo artist with Lerret.

Lerret means canvas in Norwegian. This title in combination with Hammerø’s painting on the cover, where the central figure is a bird, weaves a mystery that continues and evolves through the notes of the 12 tracks and the 54 minutes of the album. The structure is impressive and it is obvious from the beginning that Hammerø’s second solo album is thoroughly worked in every detail.

The epic electro-acoustic guitar introduction Ouverture is the prologue to the excellent Drømte du var her (I dreamed you were here), a track very reminiscent of Atlanter and justifiably the first single from the album. It is a shockingly successful mix of prog, pop, indie, with an explosive riff, a catchy chorus, a wonderful solo, and overall a highly contagious groove. In a more narrative style, the seductive Botanisk Hage and Havne Hen add the first elements of sweet psychedelia and folk innocence to the equation, in the adorably familiar form of a mysterious – romantic, rather than dark – celebration.

The instrumental L’Impèratrise (The Empress – recorded in a small cave in Hustadvika, on the northwest coast of Norway), the only track on the album where Hammerø plays alone, most emphatically marks the transition to a purely acoustic folk environment. The already evident romance peaks in the lyrical Motvind (Headwind) and the electric folk I Natt (Tonight). The second (also amazing) instrumental track of the album (Opp Ned – Upside Down) leads to the hypnotic blues groove of Sekken (Bag) and from there again to folk – almost pagan – environment (I Dag – Today), and then folk-pop in Ein Lang Veg (A Long Road), while Skogen Byen Havet (The Forest The City The Sea) closes the album summarizing the prog, folk, and direct rock components.

I am afraid that the above brief description is not enough to descibe Lerret, mainly because its magic is hidden both in the artistic expression and the emotional depth, something in which contemporary musicians rarely invest. It is obvious that Hammerø wrote these songs as a singer-songwriter (that’s basically what he is anyway), and then orchestrated them as the leader of his excellent band, which he named Råtorvåret (The Year of the Raw Peat), in remembrance of the year 1921 when the peat would not dry on the northwest coast of Norway. Gunnar Sæter’s drumming is explosive, Morten Kvam’s bass lines (Hammerø’s companion in Tenderton and Atlanter) are spot on as always, and so is Einar Næss Haugseth on keyboards, as well as the significant contribution of Dawn McCarthy (Faun Fables, Bonnie Prince Billy) and Nils Frykdahl (Sleepytime Gorilla Museum, Free Salamander Exhibit, Faun Fables) on vocals and flute.

In this ideal environment he himself created, Hammerø shines as an inspiring composer, an emotional singer, and an all-around guitarist with his rare signature slide playing on electric guitar and his technical fingerpicking on acoustic guitar. His wonderful melodies are dressed with romantic, mysterious, erotic lyrics, which are sometimes borderline surrealistic and open to different interpretations. Overall, although Lerret is based primarily on the legacy of the 60s / 70s, it does not sound retro and it’s probably Hammerø’s most “Norwegian” album, not only because Arild sings in his native language, but also because the musical weight has been given to the folk element. However, although this usually corresponds to a dark and melancholic style, which is true to a certain extent here lyrically, the album exudes positivity and optimism, and its melodies emit a unique, attractive light.

Hammerø himself describes Lerret as “normal music for strange people.” I believe that this album is addressed to anyone who loves melodic music without restrictions, as long as the goal is the journey within us.

Arild Hammerø is a guitarist and singer, a key member of the Norwegian band Atlanter, which we here at Progrocks.gr have really embraced. Although Atlanter sit on the margins of the music industry – as I had written before – “manage to express a part of their generation, that is, us”.

Some songs follow in the footsteps of Atlanter, such as Drømte du var her, with a seemingly simple structure, but under which a jazz / fusion experimentation boils. However, things turn out charmingly surprising… In the instrumental L’Imperatrise, Arild’s acoustic guitar fills our sonic and imaginary space, evoking images, from beaches to snowy slopes. I Natt, with the addition of the flute, is an introverted, psychedelic, almost pagan ballad. Finally, Sekken is at the same time an underground and ethereal bluesy song, with a political meaning: the older generation, tired, conveys to the new generation the demand for a better society.

In general, the lyrics in Lerret express this unbridled passion of Arild’s music. Where positivity struggles with frustration in an uncertain existential game. Who will be the winner? Nobody knows. In any case, it is definitely worth playing.

Arild Hammerø: “I always try to create a feeling of hope or some sense of potentiality for something new to happen”

Friday October 16th, 2020 INTERVIEWS Comments Off on Arild Hammerø: “I always try to create a feeling of hope or some sense of potentiality for something new to happen”