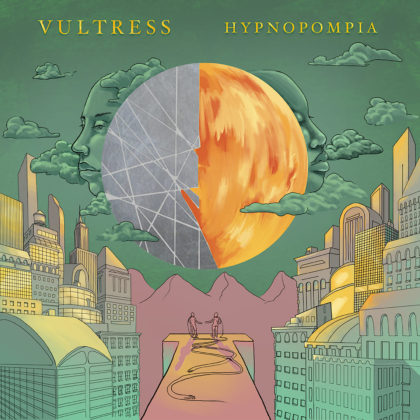 Vultress come from Valparaiso, Indiana, USA. The band consists of Paul Uhrina (drums), Anthony Capuano (vocals, keyboards), Mucho Chucho (bass) and Jordan Gaboian (guitar). Hypnopompia is their second album, seven years after their debut Distance (2013), and is an ambitious sci-fi concept album that bases every sound on the storytelling that reminds us of the concept masterpieces of Rush in the 70s.

Let’s travel to the future, about 2.5 centuries from today, to the dystopian world of Hypnopompia…

Earth, 2278. Our world has been conquered by alien organisms, which have gathered the people who survived and use them to produce “theta waves of happiness” which they trade with great profit. People are drugged in an elaborate prison called Greenhouse, where false memories are created by a system like that in The Matrix to produce those precious mental waves, which are then sucked out by the conquerors. Under normal conditions, people are kept alone, but a new upgrade system is being tested in some wings and where two people will now be placed in each cabin. And this is where the story begins…

Hypnopompia (hypnopompic state) is the state of consciousness leading out of sleep. In the title track intro, a serene melody by the keys and cello is disturbed abruptly at the end by an eerie sound. Theresa wakes up due to a malfunction in her cabin, manages to look at her neighbors and Claire who is beside her. Cmdr Hall and Wherewithal: the shift guard takes notice and forces her back on the production network. This song describes this sequence of emotions. Tranquility is disturbed by fast drumming, metal guitar riffs and brutal vocals – the guards shout. Towards the end the guitars become heavier, intense and impatient: finally the guards impose themselves. The restraints (Tether) are back in place. The guitar starts anxiously, in alertness. Cmdr Hall was careless in this unpredictable situation. The two heroines are still awake and when they find an opportunity they try to escape. Jazz melodies intertwine with metal, thus capturing the intensity of the chase. Eventually they succeed, before they face the unpleasant reality…

The world is hastily abandoned, while subconscious memories of a forgotten past are about to emerge. This is the moment when our heroines Fall into then. Intense rhythms, panic and guitars reminiscent of Iron Maiden, a world of debris. In the end, screaming space keys intensify the eerie sense of this new world. L’appel du Vide: the two fugitives have a strange feeling and decide to leave behind their imprisoned life and the illusions they experienced. The impulse for their freedom and what’s new takes over. A melodic ballad and the calming voice of Anthony Capuano assure us that everything will probably be OK, but… sure isn’t a word anymore.

But something seems to be wrong as the next track (New Sun) begins. Intensity returns, the drums give an intense rhythm again and the atmospheric keys are mixed with the fast guitars. The heroines walk under an unfamiliar sun and reach an oasis, finally encountering water. The keys calm down as the adventure ends happily – or so it seems – and form a strangely melodic phrase. Some notes do not seem to fit. A heavy veil is spread, the music is heavy and strange distorted digital voices are heard in the background. The saxophone, keyboards and guitars create a peculiar melody. Theresa is suddenly back in her cabin, Cmdr Hall and his guards reconnect the wires and she feels the sweet hypnosis. It was…, she manages to say.

The production and the level of technique on this sci-fi concept album are perfect. The style is clearly progressive rock with strong metal and alternative elements on the guitars and vocals. I especially liked the jazz melodies that are effectively injected in the songs. The influence of Coheed and Cambria, Ayreon, and Leprous is evident. By the way, Raphael Weinroth Browne (Leprous) participates in some tracks with his cello. Hypnopompia is a very successful and dynamic album by Vultress. I have no doubt that we will hear a lot more from them in the future.

Vultress is back after seven years with Hypnopompia. The album follows up their debut album really closely both in musical content and atmosphere, but It’s much more concise than its predecessor. Their sound still has a wide range of influences (from classical music to extreme metal) but this American prog metal / rock band have certainly developed their own particular style which blends progressive rock and metal elements in a very nice way. They can write songs with multiple moods and dynamic changes. Unfortunately, there is a lack of surprising moments or the diversity of song structures and sonic textures which are found in modern prog metal masterpieces. The bonus point goes for the saxophone and those jazzy latin-esque parts. Raphael Weinroth Browne (Leprous) plays cello and did a really good job. The vocalist Anthony Capuano has an inexplicably high vocal range, which reminds me a bit of Claudio Sanchez (Coheed and Cambria), but sometimes his voice leaves me completely cold and doesn’t convey any emotion at all. Hypnopompia is a short and enjoyable modern prog journey in which these guys showed improvement, but they still have a lot to learn on their way to prog stardom.