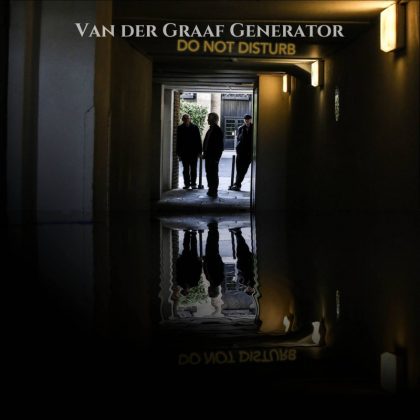 When the most important band of all times from Manchester reunited in 2005 for the second time, 26 years after their break-up, they delivered Presence which thrilled us, as well us this night-to-remember in the summer of 2005 in Athens, Lycabettus Arena where Van der Graaf Generator shared the stage with Blackfield and Porcupine Tree. Disagreements with Jackson resulted in his departure and the band went on its way as a trio up to this day. Trisector (2008) was satisfying and A Grounding in Numbers (2011) was their most mediocre work until the utterly disappointing ALT (2012) which includes out-takes and studio jams.

When Do Not Disturb was released, the members of the band stated that this could be the last album of the legendary VDGG.

Regardless of the final result, every VDGG’s release is kind of a mystery before it is out and this aspect was preserved not only during the band’s course through the 70’s but also the last eleven years since the band was reunited. The nature of the band is to evolve constantly and the contributing factors are purely endogenous, depending exclusively on the three gentlemen, who not long before they were four.

The truth is that since the reunion, the band’s fatigue seemed to get the better of them year by year, be it their studio releases or especially at their live appearances because Jackson’s absence couldn’t go unnoticed. In Do Not Disturb their desire to return to more technically demanding material becomes evident (as already announced by them) which, in that sense, reminds of the glorious past. Yet the style is not cohesive, aside that the compositions betray their only composer. As a whole, it sounds probably closer to a Peter Hammill album than a VDGG one. The most illuminating example is Forever Falling that doesn’t bring VDGG stuff to mind by any stretch of imagination; instead it is a typical prog tune in a Peter Hammill solo album. Leaving aside the discontinuity between the songs, the compositions themselves are on an average level for the standards of the prog rock titans. There are moments that remind strongly of the past like Brought to Book which is deep-knee into Pawn Hearts but rather inelegantly, and some others that are somewhat uncomfortable, like (Oh No I Must Have Said) Yes.

Even though the experimental spirit is as strong as ever and ever-present –which is nothing less but praiseworthy since the band members are about to enter the seventh decade of their lives– the fatigue is clear, perhaps for the first time after such a long time. It is clear in their playing, and it is clear in the leader’s voice whose rendering is of course in the usual standards, mostly in songs that can really allow for this to happen, like Room 1210 and above all Almost the Words which is, in my opinion, the record’s top song.

The sound is VDGG through and through, but the production gives away the gap that Jackson has left behind. Evans is very good once more but nowhere near up to his standards and Banton who had accustomed us to A-grade stuff in second role, here steps up to deliver keyboard solos, which is kind of unfair to him since this is not his element. Respectively, Hammill has to fill some space with his guitar and just between us he doesn’t belong to the cream of the crop of this field and unavoidably he is exposed when it comes to solos or experimental parts. Of course there are plenty of good moments but VDGG haven’t accustomed us to mediocrities.

Regardless of the (many a time lavished) admiration and my personal soft spot for them, the expectations rise accordingly to the band’s or artists magnitude and history. In VDGG’s case, they are high for granted, even though the band has nothing to prove for years now. The group’s history can not be stained by an average moment of the three old friends who love music as much as they did back in 1969. The living legends need no alibi whatsoever.

VDGG prove emphatically with every new release that despite the undeniable decay that time brings, they still take delight in performing and composing. Truth is that, David Jackson’s departure on the heels of the release of Present (2005) proved to be all-important and confined to some extent the group’s improvisational ability. In this year’s release it seems that VDGG’s bag of tricks lacks of any surprises and unconventional imagination that once was their trademark. The developments hardly convince and the style, as a whole, tends to sound like Peter Hammill’s personal work more than ever. Lyrically and rendering-wise is on high standards, verifying once more its ingenious spirit and lyricism. Tunes like (Οh Νo Ι Μust Ηave Said) Υes, Forever Falling, Brought to Book, Alfa Berlina emanate a profound cynicism and wisdom. Barton and Evans accompany and contribute with their personal bits to a reasonable and harnessed development of the ideas. If it is indeed their last record, Do Not Disturb is an honest addition to their discography. Nothing less, but nothing more.

There is still gas in Peter Hammill’s tank