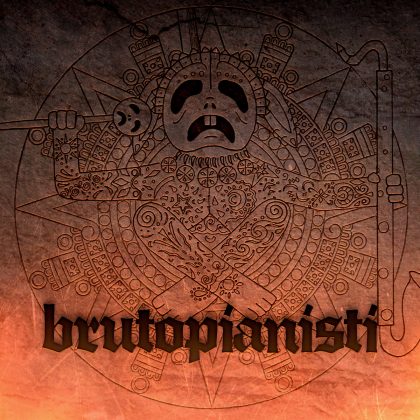 The fourth album by Utopianisti was released in digital form a few months after the impressive The Third Frontier, which left us with the best impressions (our reviews here) and was on the distinguished releases for 2016 (link). The even more impressive fact is of course that Brutopianisti has absolutely no relation to anything that preceded it, in the already varied discography of the band of the always creatively unpredictable Markus Pajakkala.

If somebody had expected jazz-fusion and 70s prog with an avant-prog intonation, as Utopianisti had accustomed us to, he would have made a tragic error in his prediction. Also, despite the pleasure we got for a possible stabilization of the line-up, Markus Pajakkala reserved a big surprise for us. Besides that here he plays all instruments (drums, bass clarinet, soprano sax, xylophone), his guests contribute to various types of vocals (screams, grunts, yodel, squeaks). Interesting already, right? If anything else, the noisy mix of avant-garde, experimental jazz, metal and ethnic / world music probably exceeds in extremity the most daring discographic ventures of John Zorn (without avoiding sounding like them).

An element that is surprisingly clear and easily perceived is that structure is not absent here. The flow of the tracks serves the sound of Brutopianisti as a single experiment with a mostly aggressive character that goes beyond annoying and even not at all accidental. Interesting ideas are spread in the rhythmic parts with the technically challenging drumming making the greatest impression, while the bass clarinet gives the avant-garde colour that Pajakkala loves since the formation of Utopianisti. As he himself mentions, ideas are based on his conception, pure luck and the Aztec god Xochipilli (depicted also in the gorgeous cover edited by Tiina Heikka). By listening to the album several times one concludes that fate was probably the main factor here and this also was not random at all, but actually an element of creation. After all of course, where else one could hear extreme Lappish avant-jazz metalcore?  Nowhere else of course.

Brutopianisti will probably be a parenthesis in the discography of Utopianisti and despite the assumption of being a daring project, it is probably better being so. This is something that the creator wanted to get out of him, giving a different creative and purely experimental aspect of his talent. In the name of Xochipilli, however, several of the ideas of Markus Pajakkala were sacrificed for a brutal prog result that deserves our respect, but mainly our patience.

Utopianisti wanted to explore and maybe reach their limits by trying to create something extreme and heavy.  A vague term like “brutal avantcore” would definitely describe the album as it combines avant-prog, jazzcore, metal, progressive, death metal growls and blast beats. When all these are mixed together the result can be something “dyspeptic” and exhausting or something marvelous. Utopianisti did not create a masterpiece but at least nothing ludicrous.

The album is aggressive with complex, even bizarre, structures and free jazz experimentation that is highlighted by Pajakkala’s multi-instrumental talent. As a fan of extreme music, trying to listen more times to this album seemed pointless, since after a while the feeling of boredness, the intense complexity and too much free jazz gave me a headache! Since the purpose was to create an intense, chaotic album, my final feeling is that they derailed from that purpose creating something Zorn-ish wannabe.