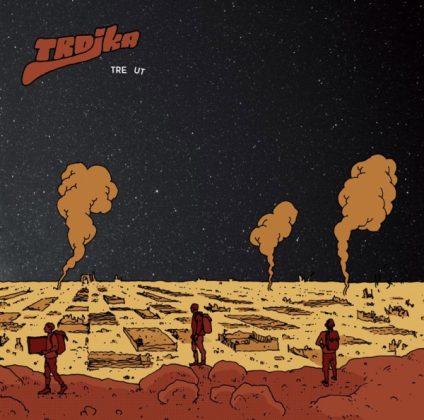 The first album by Trojka from Norway entitled I Speilvendthet (our reviews here) left the best of impressions on those who listened to it without escaping from the narrow limits of underground prog. The three musicians from Bergen presented a peculiar progressive rock mixture with pop and jazz fusion, which steps with one foot in the 1970s, but also includes sounds from the 80s. After two years they return with another package of songs under the title Tre Ut, trying to repeat the recipe of the first album without having any anxiety about the success they will make. Or so it seems, anyway.

Trojka, as their name implies, is a trio of young musicians: Simon Ulvenes Kverneng (vocals and bass), Gjert Hermansen (percussion and vocals), and August Riise (keyboards and synths). Their new album Tre Ut (Three Out) is accompanied by an elegant artwork and is released by the exceptional Apollon Records.

These Norwegians silently released the awesome I Speilvendhet two years ago, which I think impressed the small audience that came in contact with it. That’s exactly where I belong. I cannot hide that their debut is one of my favorite albums in recent years.

Trojka is a special case. The basis of compositions is based on bass, synths and drums. The use of electric guitar is limited to special use in only two songs. This seems to be paradoxical, but the essence and richness of the compositions do not allow anyone to talk about something lacking or a possibly better result if other instruments were used more.

The beautifully bizarre musical approach of the band manages to combine different influences and to present a very personal artistic character. With their love for progressive rock as their springboard, they enrich their compositions with elements of jazz and fusion, funk, and even pop. The so typically 80’s synths create a sense of theme music of that decade, and some may find that starnge.

After the jazzy openers President and Penger (Money), the first moment of magic comes with Jakten (The Hunt). While the vocals seem to be the weakest element of the band, the vocal melodies are so well-done that make them sound almost ideal, and this is also the case in Jakten. They seem to be part of a machine, which requires only them to work. Oh yeah, they continue to prefer their mother tongue in their lyrics. The instrumental Orkan (Huriccane) with this bass intro sounds like mors signals, revealing the great influence of Geddy Lee and Rush on the bass lines. Was YYZ on their mind when they composed this intro or is it just me?

Fly has a gentler pace and is an excellent atmospheric composition, and the wise use of the guitar helps here. Nattevakt (Night Guard), Forbi Mørket (Past Darkness) and Grenseland (Border) combine all the elements of Trojka. The differentiation in relation to their counterpart lies in the fact that it is darker, it brings the melancholy of Norwegian prog, and maybe also Italian prog with its pompous element, but at the same time it has an invisible black humor, a self- deprecating mood. Å Se with its gradual escalation leads to a melodramaticic 70s prog moment. The title song that closes the album refers to the epic moments of Genesis and ELP but also to the British neo-prog of 80’s, especially due to the sound of synths.

The production of the album is not exactly the so-called clear, the clinically perfected studio spund. But I think this detail was correctly done, in order to capture this peculiar cosmic mood that rises from the album.

The genuinely alternate progressive proposition of the three great musicians and their sincere effort to create their personal sound was once again successful in their second album. I understand and accept it, their music cannot concern all of prog listeners. But it hides a rare magic that can potentially be revealed after careful hearings.

After listening to Tre Ut for the first time I was left with a feeling of dissatisfaction, since Trojka’s second effort sounds a lot like their first album. In the songwriting, the influences and the production of the vocals the listener lives a permanent musical déjà-vu. However, after many hearings, the album becomes very enjoyable, because after all, what pleased me in I Speilvendthet flows in abundance here as well. Apart from the obvious use of the Norwegian language, the stigma of the old Scandinavian school is also intense here, so the followers of this sound have to rush, having in mind that the pop elements and the 80s sound are fully integrated into the band’s style. The rest of prog fans have to listen to this brilliant record, which is inferior to its predecessor, only because it came second.