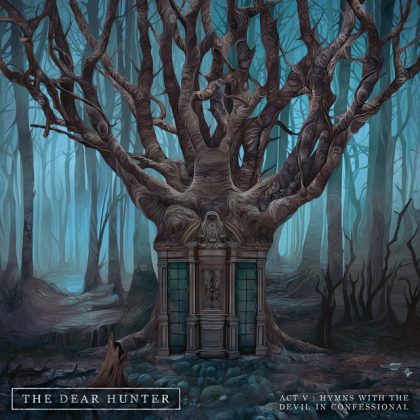 Just one year after the amazing Act IV: Rebirth in Reprise (our reviews in Greek here), the fifth sequel of Act was released unexpectedly early, proving that Casey Crescenzo had already finished most (if not all) tracks a while ago, something he admitted himself, announcing a sixth final part, which will not be so much rock. I do not remember any other case of a fifth part to a concept prog album and with the first four being so equal. Whether Act V can be placed in the same list remains to be seen.

After repeated spins of another extravagant album, I came to the above conclusion. The Dear Hunter sound like a modern Alan Parsons Project in a number of aspects: creativity, orchestration, emotion, intelligence and so on; and have every right to be hailed as such.

Although a strongly commercial / pop album, Act V has all the elements that groups such as Coldplay don’t seem to exhibit: deep exploration of music, effort in going a step further and perhaps simply talent! Although The Dear Hunter do borrow elements from commercial giants such as Alan Parsons and modern pop bands such as Coldplay, the result is a purely progressive album. Lush keyboards, sophisticated storytelling, complex orchestration and arrangements along pop and indie structures, theatrical vocals, mood and tempo variations.

Although the listener may not be entirely up to speed with the concept of the “Acts”, it is inevitable that they get drawn into it. Crescenzo’s vocals resemble to movie-like narrations but range from deeply emotional to highly passionate which cannot but excite the listener paying attention to what unfolds over the 74 minutes of confessions with the devil.

I am usually biased against long albums that usually don’t deliver – but this is another story altogether. After a bombastic up-tempo opening 25 minutes, the album dips the mood (Melpomene, The Haves Ηave Naught, Light) before returning again to stage-killer tracks such as Gloria or The Fire (Remains). Light reminds us of Dream Theater’s Metropolis pt.2 cheesiest moments, but even then, the musicianship is so good that you cannot but forgive the slide…

I find it amusing that I can enjoy sounds of acts such as Coheed and Cambria, U2, Coldplay filtered through the talent of this bunch. A more-than-satisfactorily delivered West-End production, the answer as to whether pop-prog can lead in 2016 is given herewith. Beware the confessions with the Devil but invest in this brilliant album.

Incredible as it may sound, Act V, with a total duration of more than 73 minutes (!), is at the same level as its predecessor. Including many style changes and maintaining an incessant flow, as the story is driven into dark paths, the structure is simply flawless. Crescenzo proves once more and with great comfort that he is one of the best singers and composers in contemporary prog and perhaps in rock music in general. Apart from crossover prog (Dear Hunter are the undisputed kings of the genre), there are strong elements of traditional American music on this album. The production is impeccable and the orchestration is no less than perfect. The contenders for the best part of Act are now five and this is certainly the best prog concept series ever.