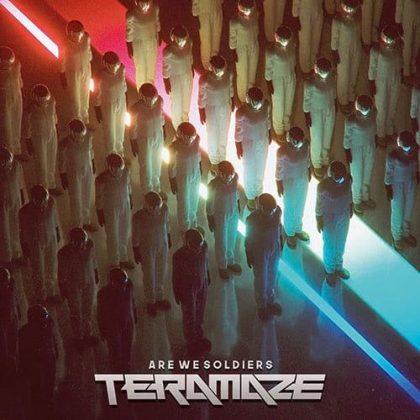 Just when Teramaze had accustomed us to annual releases in their second phase (three albums from 2012 to 2015), now it took them almost four years release new material since the brilliant Her Halo (our reviews here). I thought that they had disbanded, but fortunately I was wrong and this delay had possibly to do with member changes since only the main composer and guitarist, Dean Wells, and the singer Nathan Peachey are still on board.

On the up side, the new members have breathed freshness and this factor differentiates Are We Soldiers from its predecessors while it remains a Teramaze album. But let’s take things from the beginning.

The band carries on playing a mixture of melodic progressive metal with a modern sound which, in my book, recalls Threshold, Seventh Wonder, Redemption and the rest democratic forces. The album is far more melodic than the previous ones with a pop orientation since the songs maintain a more ‘typical’ structure and the songs are catchier while the production remains strong and crystal clear where all instruments are allowed to shine.

But on the downside the songs are very similar to each other and they don’t possess the necessary diversity. It’s not monotonous, but it is not as adventurous as a progressive album should be. There are a lot of nice tracks of course like Control Conquer Collide which is very heavy, riff-ridden and features an awesome Hammond or Orwellian Times and Weight of Humanity which sound like paying homage to Haken, or the magnificent Depopulate which spans 11 minutes and pulls off to combine the pop era of Genesis with Dream Theater’s progressive metal and it is possibly the summit of the album. Still, there are songs which, in my opinion, add nothing but duration to the album like the title-track, From Saviour to Assassin and Fact Resistant Human which have overegged the pudding with regard to melody and therefore they sound too cheesy. If they were absent, we would have to do with a top-notch release.

If modern progressive metal is your scene, then Are We Soldiers is an album suitable for summertime that will keep you ideal company while driving to the nearest beach. Its melodiousness will relax you and its up-tempo nature and riffs will get you in the mood to enjoy your day at the sea. But its role is over once the first rains of autumn hit the ground.

Are We Soldiers carries the ambition to broaden the audience that follows Teramaze after the magnificent Her Halo. Musically, it is more straightforward, less lyrical, less atmospheric and at times more aggressive so that it fits the Orwellian philosophy that permeates the lyrics. Unfortunately, despite the familiar sound of Teramaze and the musical virtues of the band, many choruses and hooks, albeit catchy (Fact Resistant Human), sound flat, while the diversity of the compositions is less than amazing. With regard to the guitar parts, the performance is flawless and the ideas are quite interesting, especially when things get heavier like the explosive The One Percent Disarm. Yet, they fail to impress us as much as its predecessor did. Using the keyboards when some closing words bring a tune to the end was an interesting idea, but it recurs very often. We should stress that the come-back of the initial singer, Brett Rerekura, altered the mindset of the compositions, but in my humble opinion the performance is below the standards that Nathan Peachey set. It’s very debatable if this album will stand the test of time since no composition possesses the necessary quality for that. Naturally, the partisans of the modern progressive sound will spot stuff that will thrill them, after all the Australian scene is progressing constantly, but the rest could dig in the rest back catalogue of Teramaze.

Tuesday September 1st, 2020 News Comments Off on Teramaze release video for ‘A Deep State of Awake’ from upcoming album ‘I Wonder’