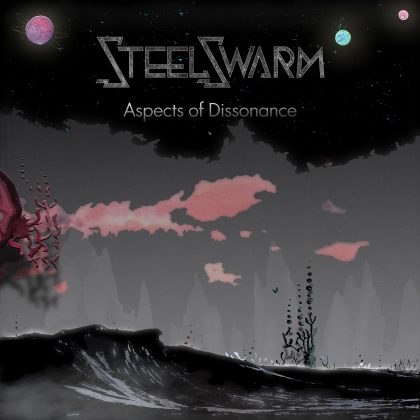 SteelSwarm is a relatively new progressive metal band from Australia, a country with a great contemporary prog scene which includes bands that have already made their mark. The line-up of the trio includes: Dane Simms (guitar, vocals), Jamie Simms (bass) and Zac Stewart (drums, keys).

Let’s hope that the band will follow the great tradition of Australian bands over the years and fulfill the expectations of the debut full-length album Aspects of Dissonance.

SteelSwarm’s debut album was released seven years after the EP The Ultimate Offering and was pre-announced by the release of the single Everything Lasts Forever two years ago.

But which exactly is the musical orientation? SteelSwarm follows the spirit of our time: they undoubtedly embrace djent’s well-established influence in the field of hard / heavy music. Their music rests on the achievements of Animals as Leaders, Periphery and other prominent contemporary bands of this relatively new sound. Technique intertwines with melody in an attempt to extend the background of its creators a little beyond their influences.

This is exactly what we hear in the opening track, Begin Simulation: an impressive guitar introduction that unfolds into a track that balances technical metal riffs with melodic parts. Brutal vocals are combined with clean vocals, and the latter reflect the emotions of the song. River of Sky follows the same recipe with a piano introduction before the first really impressive track, Future Gods. Clearly this is their most progressive moment; it’s the canvas to showcase their talent as a band. Impressive alternations exude something from Animals as Leaders’ aesthetics, showing their high level of technique as musicians and at the same time the ability to create a solid track.

Dane Simms has revealed that Future Gods is a piece that reflects the idea that humanity is living it up as the ‘Future Gods’ of this planet, while the earth is burning down, in terms of environmental impact. It’s very interesting, beautiful thinking with clear ecological implications, which is part of the overall lyrical conception of the album.

Everything Lasts Forever, their first official video clip, is one of the most melodic moments of the album. This song has strong TesseracT elements (and it’s not the only one) and definitely has a very memorable chorus. The band’s philosophy is also clearly understood here: in the eternal cycle of nature nothing really dies, it just mutates into something else.

What follows is not equally interesting. Certainly, technique and melody prevail throughout the album and the tracks are well structured. However, there is nothing that creates something intense, but a repetitive pattern that, no matter how beautiful, it remains the same.

Without a doubt, Phthalo has a great guitar solo, and Wasted Signs brings something slightly different with its unexpected a la Tool introduction, but overall the songwriting is not the band’s strong point.

If we consider that Aspects of Dissonance is just their first album, we can hope for better things in the future. What the band seems to lack is the ability to write memorable tracks. Based on the contemporary djent / prog metal wave, the band just needs to add a more personal style.

Records like SteelSwarm’s Aspects of Dissonance and this mix of djent-prog metal and the alternation between melodic and extreme vocals can result in masterpieces. However, I think that this album is a different case. It gives the impression that it was recorded to prove how amazing musicians the band members are without giving so much weight to songwriting. Personally, I respect them because they play technical prog, I ‘d call it super technical NWOAHM, with good production, nice ideas and decent vocals, but unfortunately you cannot easily follow and enjoy. You have to be in the right mood to listen to the album, since the songs are a constant alternation of rhythm and melody, so you cannot be touched by a song or headbang to a riff. Records of this genre are mainly intended for musicians and less for progsters and it’s much easier to listen to one song at a time rather than the whole album. If they invest more in their compositional skills, they are capable of great things. Until then…