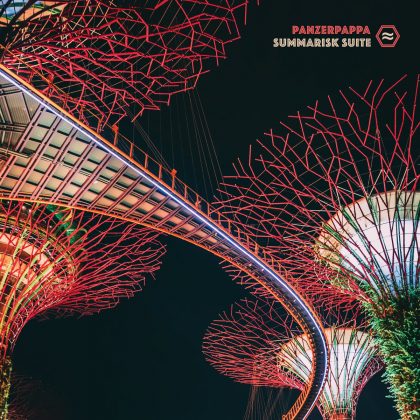 The quality and impressive growth of Panzerpappa, regardless of the musical direction they opt for, is an undisputed fact which is verified by every album they release and this is something that not many bands can claim. What sets them apart is their inexhaustible inspiration, imagination and their ability to materialize their vision in the studio flawlessly and in an attractive fashion, but uncompromising at the same time. All of the above consist a bet in the peculiar universe of RIO / avant prog and the band is always a winner, having set the bar high. They are worthy representatives of the Norwegian prog scene which offers us lately magnificent music from the entire spectrum of the genre. Three years after the wondrous Pestrottedans (our reviews here), Panzerpappa come back to remind us the obvious.

The ideal soundtrack of the winter to come

The latest work of Panzerpappa entitled Summarisk Suite is their seventh studio album, released this time through the new-founded Apollo Records. According to the band, this album was not planned, it just came along while they were composing material for something totally different, but in the end they decided to put their original thoughts aside and focus on this album which blended fresh and old ideas, but the final outcome is an impressive and well-rounded work.

The references to Samla Mammas Manna, Henry Cow, Univers Zero still apply and their climaxes nod to King Crimson at their darkest moments. This time the atmosphere is nightmarish, claustrophobic with peaks and pits that take by surprise the listener, forcing them into a journey through misty soundscapes.  Trond Gjellum and his accomplice Steinar Borve and all the other musicians are endowed with the talent to improvise on the compositions and create deductive images in a spectacular way. Nevertheless, the arrangements and the in-the-pocket playing are presented with coherence and the band is mindful of the expanse that each turn should occupy in order to round off an idea, free from superfluous processes. In some cases the development happens rapidly like the opener Αlgerisk Symfo with its capturing changes and some other times it lingers, allowing to the musicians to step up, like Jarle Storlokken with its eastern scent and its lyrical guitar solo. The almost latin (?) with its steady and rhythmic aisles spins around until every participant has said their final word. Permutert Panzerrock which is the shortest and perhaps the most accessible tune is performed with verve. The minimal intro of Revidert Malist provides layers of melancholy through the keyboards with dynamics that rise and fall and alternating themes and phrases and it is maybe the summit of the record. Seriell Ballade closes in an exemplary fashion the album; a mysterious and unpredictable song which has its roots back in the 70s and more precisely in the western culture of Henry Cow, reproducing just as good the goose bumps and the magnificent, uncomfortable feelings. The contribution of the production in the final outcome cannot be underestimated, rendering the listening process enjoyable in spite of the long song durations.

Panzerpappa pulled off one more time to excite us with their adventurous music and it is one more addition to their already interesting back catalogue that appeals to the demanding listeners. Equally sophisticated and low-profile, serious, dedicated to their art, they present the latter in an exemplary way. Every chapter is a brand new story, well-written and animated. Their music is structured on their respectable origins with a lot of room for improvement and revitalization through an automated evolution. Panzerpappa keep growing in our estimation. If the next winter is heavy, let Summarisk Suite be its soundtrack.

Sometimes art itself makes its own way or at least it just happens, not caused by an intention but it is a pure serendipity. Summarisk Suite was not included in the band’s plans, it just surfaced by mixing new and old material. The energy index here is much higher in comparison to Pestrottedans, without betraying the identity of the band which features the lurking melodic parts of primarily their leader Steinar Børve. Panzerpappa  honour to the full their avant-prog nature and they present us for one more time magnificent melodies and their songs seem to aim to elate their audience. In this environment of perfected execution and flawless prog performances, the level of the compositions is high (where Revidert Malist possibly takes the cake), but not to the point of taking the album to the next level; and yet, you have the feeling that Panzerpappa are on the verge of it.

Umpfel – As the Waters Cover the Sea