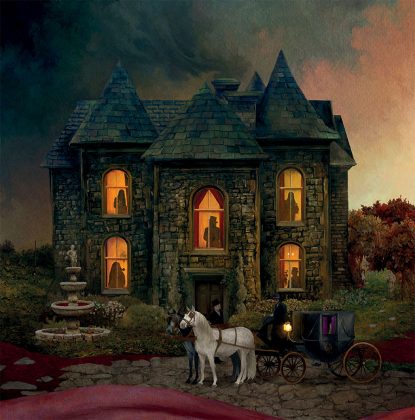 Opeth are well known in the progressive circles. A band that has changed its style often, starting in the distant 1995 as a band faithful to the atmospheric death metal, gradually incorporating progressive elements culminating in the golden foursome albums Blackwater Park, Deliverance, Damnation, Ghost Reveries. But the mind of the leader, guitarist, composer and singer Mikael Åkerfeldt has always been dominated by a worship and a passion for the 70s sound resulting in albums from Heritage (2011) to today, so they have transformed into a progressive rock band with minimal metal references. The change of course created discord among the supporters, with some failing to follow the new musical direction.

In 2019 Opeth proceed with a very ambitious move, to record an English and a Swedish version of their new album, In Cauda Venenum. Will the poison tail (as translated from Latin) poison our thoughts, offering us a new musical vision or will it create awkward paralysis?

Sailing in the right direction

It is always difficult to review an Opeth album, both because they are a favorite band and because their recent releases created more riddles than imposing statements. In Sorceress (you can read our reviews here) Opeth presented a more metal version of their progressive rock to the delight of guitarist  Fredrik  Akesson, which although compositionally good, over time was judged as predictable. So are Opeth really predictable? Basically, no, this work is much more detailed. In Cauda Venenum is a demanding listen of almost 70 minutes.

Of course, the 70s musical collage stays present with references to King Crimson and Deep Purple among others. However, this time we meet the more jazzy composition The Garroter, an excellent song that reflects their potential, the frantic Charlatan that gives sweet looks to Sorceress with modern riffs as well as the cinematic Dignity, an alternative version of Goblin. In addition, the compositions do not follow the same beaten track, the same structure. For example, there’s nothing in common between Continuum and  The Garroter or Charlatan and Universal Truth. Of course, this does not mean that we will be surprised with the entire album. Next of Kin and Heart at Hand could comfortably be a part of their previous releases, faithful to the 70s doctrine more than anything else. Talent and playing wise, there is no doubt, Opeth  is one of the most reliable music units. The guitarists Åkerfeldt and Akesson are excellent, a very sweet and familiar sound that sometimes becomes heavier, mainly because of Akesson. In addition, Åkerfeldt has evolved into a technically capable singer. The breadth of his voice, his complexion and emotion are the hallmark of the album and a momentous statement of value of the Swede to the contemporary musical scene. Just listen to All Things Will Pass or the beautiful and yet simple ballad Lovelorn Crime. The rhythm section reliably guides the music with the significant assistance of Mendez, a musician who has not received the recognition that he deserves, but he gives a great deal to the band’s vision.

Even though I understand the lyrical content in English, the flow of the Swedish version of the album sounds even smoother, as if the music was written to surround the native language of Åkerfeldt. So, if you do not have a problem with tricky languages, it is probably the preferred version. It’s no coincidence that the various recorded excerpts are in Swedish. Opeth as one would expect, speak to your feelings, they create a melancholic personal journey, which is mostly coated with a pessimistic poetic cloak. Sometimes the lyrics frame a dark horror tale, In Cuda Venenum is their darkest atmospheric album in their prog rock era of the last 8 years.

The major question is whether the Swedes dared, if the new phase of their career found their personal musical stigma. The answer is almost. The variety of the disc shows such an essence. An essence which, despite the very pure intentions, cannot shake off the love that Åkrfeldt has for the 70s. We hear very nice compositions, it is certainly not a clear tribute like Heritage was or some moments of its predecessors,  but we hear material that has been played 50 years ago, it is not enough to be considered as the new identity of Opeth. If We had more of Charlatan, The Garroter or Dignity we would be talking about a really great record. The mark is positive and it is certainly one of the albums that will be appreciated even more in the long run, perhaps it is the beginning for the recovery of Opeth. This has many of the required elements, but not everything is there.

We waited many years for Mikael Åkerfeldt to find the way to connect his new direction with the unique talent he possesses, to write dark music through enchanting melodies. Until some time ago, all the  albums  released by Opeth that had left behind the death metal aspects, stood small in front of Damnation, which is not unjustly regarded as one of the great progressive albums of the past decade. In In cauda Venenum everything reminds the 00’s with the band approaching the dark sound that they always had giving more weight to the atmosphere and keeping calm in the balance of the orchestrations. If I had to choose a song to describe the reinstatement that the Swedes are achieving, surely Lovelorn Crime, is probably the most representative moment of the album where you can perceive this shift in the past, with some new but crucial elements (symphonic orchestra). But in the rest of the album Opeth are almost triumphant. The limitation of the rock vocals, the less (unneeded) heavy rock jams and especially the extended use of an acoustic guitar (typical example of the magical passages in Next of Kin) remind us of the band we used to love. And yes, after many years they have written a song that will remain a classic: All Things Will Pass at the end of the album. I’m so certain about it.