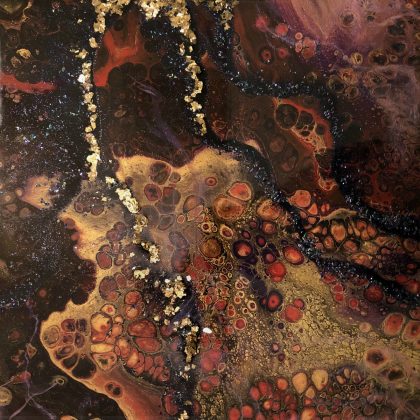 Farmhouse Odyssey from California have made leaps of progress in sound, composition and lyrics in just about five years of recording. From their self-titled debut, they have demonstrated maturity, imagination, essence despite the complex and well-structured presentation of their musical vision. They have now found a way to decode the mutability of human psyche and transfer it to works that appeal to audiences with high emotional intelligence. Flawless in instrumentation, without unnecessary improvised deviations or pseudo-paraded symphonic clichés, they give a stigma and food for thought through the homogeneity and the talent that distinguishes them at individual and overall level. Three years after the wonderful Rise of the Waterfowl (our reviews here), Farmhouse Odyssey are once again here with the Fertile Ground which was released this year.

Following the same recipe, but with more freedo, and expressing their inner selves this time, the expression of  Farmhouse Odyssey  expands compared to their first two albums. The production certainly contributes with a clean and balanced sound with emphasis on homogeneity and technical pluralism. The melodic moments always come with unpredictable aspects. The alternation of emotions accentuate the lyrics and in an embroiled way convert the existential and philosophical questions to dreamy soundscapes, without defusing the references from Dostoevsky which, anyway, invite you to internal pursuits. Fragile interpretations contribute to a veil of sophistication and melancholy, in a way that feels like it’s almost a narration, making the listening session an adventurous spiritual experience, a beautiful journey.

In The Call, the acoustic guitars and mandolin together with the sound effects and the deep-voice of Aaron Laughlin open the first chapter with rotating melodies that lend an autumn aroma. The piano intro in Out of the Fog and the starring role of the guitar together with the distinctive performance of Alex Espe on vocals, make the track balance between earth and cloudy sky with a nostalgic sad-happy mood. They know how to offer moments like these in a way that is riveting and liberating at the same time. The ‘70s references here are presented discreetly and filtered to fit in today and tomorrow. The flirt with the music of Tony Banks and Steve Hackett is given in a dimension more cerebral and frugal. The same image continues in Betwixt and Between with more lyricism and fluctuations in the dynamics, wonderful interactions and wisely placed peaks. The vocal harmonies touch perfection in devout emotion. Ancient Yet  Eternal is enchanting with the keys on the leading role. The rhythmic base helps the melody with alternating rhythms, resulting in absolute precision. Rain sounds accompany the ominous end of the track behind the dramatic piano pattern. The guitar themes at the intro of Verve with the synthesizers as background testify to probaly the most accessible moment of the album culminating in the amazing chorus, and the album ends majestically.

Farmhouse Odyssey have once again done great, through a difficult but well-crafted material. They not only succeed in simply writing and performing as remarkable musicians. With absolute knowledge of the emotional gravity that accompanies it, they have the magic touch to capture it the way it deserves. They manage to turn the unknown into known in a period where everything has been played and everything has been said. This shows that they respect the listener and the time he/she will invest to even temporarily escape from the gray daily routine. Like all of their works so far, this record needs multiple listens. I hope that in the long term they will be more appreciated and we will enjoy more releases such as this. Of course, this requires a fertile ground.

Fertile Ground certifies the hopes we had from a very good band that is clearly trying to create good music with no trace of vagueness or any form of “ease”. Three years after the wonderful Rise of the Waterfowl, the band is wisely investing in highlighting the lyrical depth. The contemporary and at the same time purely personal version of the 70s prog rock influences blend ideally with the smooth indie vocal lines and fusion phrases. It is remarkable that even the peaks sound a bit mild, as an integral part of a homogeneous set. In the dreamy landscape of Fertile Ground full of technique, sweet melodies and exciting plot, perhaps the level of the compositions could have been even higher, simply because the band itself has set the bar so high. However, what counts is that the Fertile Ground is not just durable, but suitable for multiple hearings. Farmhouse Odyssey succeeds where most bands justifiably fail. What they do is 100% prog and 100% interesting and essential.