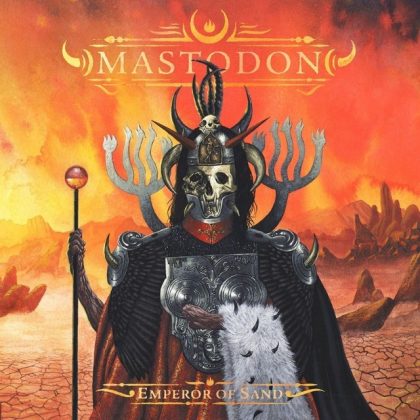 During the 21th century, no other band has made bigger fuss around its name than Mastodon have in the metal (in the broad sense of term) firmament. And rightfully so, because all of their outings range from very good to exceptional and, most important, without repeating themselves, something that has their fans champing at the bit for their new album.

From Remission to Blood Mountain and from Crack the Skye to Once More Round the Sun, the diversity the band has displayed is chameleon-like, since in their early years they stood out thanks to their sludge sound and as their back catalogue expanded they introduced progressive elements, creating therefore a motley fan base where every fan, depending on their musical background, flies the flag for a different album.

In this seventh turn of their course, the gang from Atlanta presents us Emperor of Sand that is met with mixed feelings, firstly because of the songs that are already available and secondly because of their statements about what metal and rock n’ roll are. Is their concern justifiable or were they just attention whores?

The hot streak goes on

We start with an axiom: Mastodon are the superheroes of the hard sound in our days. What they have done is unprecedented and, more than likely, will never be surpassed. Their previous record Once More Round The Sun was the coolest of their career with superb refrains. This coolness is still present in their new album, but now it is coupled with much more seriousness and thus resulting in the most Mastodon album they have done so far.

Emperor of Sand bombs the listener with all this stuff that made the Americans so unique, without adding glaring new elements as they did in their previous works. Nevertheless, there is not a moment of repetition or replication. The freshness that the band emanates in its seventh studio album is almost unnatural.

Compositional-wise, the metal aspect is more evident in comparison with their two previous albums, while the more complex/progressive motifs of Crack the Skye are back in the game; Jaguar God that brings down the curtain is the most illustrating example. The refrains are not so sing-along this time, excluding Show Yourself, a heavy/pop cut for children and/or for junkies. Generally speaking, this is an outing which contains ideas that other musicians need years to get down on tape.

In my opinion, the most basic feature that makes Mastodon’s style so distinguishable is the way they tinge with psychedelic colours songs where the metal aspect is too concentrated. They have pulled it off thanks to their compositional talent, as well as because of their views about how they should sound. The production is stellar once more. Their massive sound is combined identically with depth and melody. The above in conjunction with the sophisticated arrangements and the tasteful selection from the palette of sounds, give the impression to the listener of a 3D listen.

It is no longer a necessity to comment the performance of the fantastic four from Atlanta, but what Brann Dailor does is second to none once again. On the other hand, Brent Hinds is still the last great guitar hero. There is not a single superfluous note in his solos. The vocal lines, as in their previous albums, remain spot-on which is a paradox because none of them can be counted as a proper singer.

Emperor of Sand continues the unbelievable streak of the good records that Mastodon deliver and establishes them as an application for generating good songs (for instance, nobody else could have ever written Steambreather). It is unlikely to lure new fans, but long-term ones won’t be disappointed for sure and after some time, it will be involved among their best albums.

I was genuinely impatient for Mastodon’s new album, mainly because I was slightly disappointed by their previous one and I wanted to know which direction they would take. Fortunately, the band came back with a superior record than its predecessor. The elements they introduced to their sound in The Hunter are present here too, namely less extreme vocals, more rock-oriented songs and also a more straightforward and alternative approach to write melodies, but simultaneously more progressive. The production is, as always, exceptional and the songs emanate a more rock n’ roll attitude, a fact that renders – to my ears – the record as the most enjoyable of their career. Personally, I had a great time with Show Yourself, I zonked out with Steambreather, I was hooked to Ancient Kingdom and Jaguar God, yet the one that really grabbed me was Roots Remain. In their seventh release, Mastodon deliver eleven songs in an even and amazing album which already declares candidacy for a position among the best albums of the year.