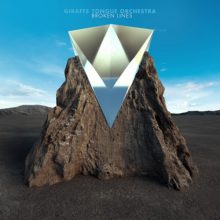 History tells us that the majority of supergroups is like a big box, with a fancy wrapping and when it comes to the content… not much. This is because they are usually short-lived side projects that rarely record timeless albums. In this case, the reason behind this collaboration was the longstanding friendship between Brent Hinds (Mastodon) and Ben Weinman (Dillinger Escape Plan) who hooked up with William DuVall of Alice In Chains (here exclusively as singer), Thomas Pridgen (ex-Mars Volta) on drums and Pete Griffin on bass (Ζappa Plays Zappa). Right from the very first notes of Broken Lines, uncertainty evaporates…

We shouldn’t delude ourselves: every time we hear about a new release from a “supergroup” of our time, our mind goes to just-arrived-at-the-scene rock stars (somewhere in between them is Dave Grohl) who became buddies at the backstage of some tour and during a binge they thought they might give it a go to record some songs. The truth is, we haven’t listen to anything memorable since Them Crooked Vultures (here is Dave Grohl again!) as far as supergroups go.

The case of Giraffe Tongue Orchestra is totally different. It seems that in the year of 2016, a critical year for music and humanity as a whole (consider US elections), these gentlemen gathered together and decided to unfold their talent and ambition for good and cram them into a record with a pop vibe but at the same time its musical depth renders it as a grower. The signatures of Brent Hinds (Mastodon), William DuVall (Alice in Chains), Ben Weinman (The Dillinger Escape Plan) but also of the famed Thomas Pridgen (ex-Mars Volta) are easy to recognize during the entire Broken Lines, tailored with absolute homogeneity (production-wise the result is nothing less than perfect). Musically, is in the vein of alternative rock, as expected. Aside that, funk, post-punk, progressive rock and extreme metal elements as well as bands like Faith No More or Mars Volta are all over the place, waiting patiently for the listener to discover them in an “in-your-face” flow, where even the weakest moments of the record (Adapt Or Die, All We Have Is Now) go with this flow with no jar. Moreover, the shade of William DuVall soul voice dominates the album, a singer who carries the cross of Layne Staley for years and his contribution has turned Alice in Chains into the coolest band on the planet. DuVall did to create addictive pop vocal melodies over the songs’ complex structures and simultaneously proves that he is a top voice.

In the case of Broken Lines, the listener is bound to hit the repeat button over and over again. During this process, their preference for the record’s best song is likely to swift from one piece to another. My personal favourites are Everyone Gets What They Really Want, a mixture of Bruno Mars and Alice in Chains and Back to the Light that sounds as it was taken off Mars Volta’s Octahedron (the voice that sings the refrain, is not Cedrix’s but Juliette Lewis’!). One thing is certain: the album can get you in the mood to drive your car with the window down at a seaside boulevard but also can seclude you in your house for a closer listen, breaking the boundaries between the genres, gifting us beautiful music; how did we say it’s called…?

Giraffe Tongue Orchestra’s line-up is more than impressive. The main question is if this bunch of musicians could result in something more than a mere side project. The answer, to a great extend, is a “yes”. The record is well taken care of and the band sounds tight. The not-so-good songs are way above the average while the best are outstanding. Giraffe’s alternative rock puts at times the pedal to the metal and some other times sounds as cool as if driving with sunglasses on and the hand dangling outside the car’s window. The progressive element creeps at the background of all compositions, more like a sponsor of intellectuality, and the performing skills are, no surprises here, fiery. DuVall, far from Alice in Chains’ two-voice polyphonies, is established as one of the best voices of our era. If a couple of songs were on a par with the video-clips (Crucifixion and Blood Moon), the mark below would be surely higher.