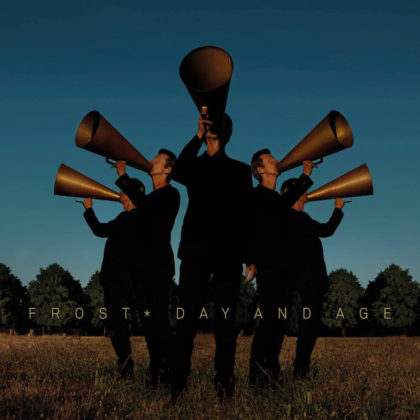 Who knows if back in 2004 when Jem Godfrey decided to form Frost*, he knew that he would create a cult following for his band to the extent that there is a substantial number of fans waiting for the bands next release in 2021. The new release came with Day and Age, a year after the EP Others five years after the very competent Falling Satellites. The main difference in terms of personnel for this album comes in the drums since Craig Blundell departed, and instead of replacing him Day and Age features 3 very talented and amazing guest drummers which includes Darby Todd (The Darkness), Kaz Rodriguez (Chaka Khan) and Pat Mastelotto (King Crimson).

Am I the scum?

There are enough new ideas in Day and Age to make this album interesting to listen for any Frost* fan. The band has taken a bet to further move in to the 80s heavy synth pop sounds and they do a pretty good job at it. The album starts with the self-titled song which is the longest one 12 minutes of a very easy listening neo prog that pucks a punch when it needs to. The song is a great choice to be in the beginning of the album with the music being a very nice soundtrack to your day. A very enjoyable neo-prog track that is very in your face and while it mainly focuses on the pop melody aspects the song seems to be actually picking up a more complex progressive steam at the end before it fades out almost making fun of you for thinking it will evolve in something more complicated.

The overall message of the album does not win any laurels of originality with the band asking you to look yourself in the mirror and ask about the world we’re living and ponder about your future, the future of the human race and your position in this world. Not the most original of messages but…

The next few songs seem to try and capture attention either by the more heavy elements of Terrestial or by the more spacey piano and synth focused Waiting for the Life. The latter is a very interesting track instrumentally, and while Godfrey’s (and Mitchell’s) vocals are adequate but they show their limit especially closer to the end of the track. On the opposite side, we have a track like The Boy Who Stood Still that is narrated by Jason Isaacs with Godfrey lining the narrations with a great multilayered soundscape which emphasizes the compositional strengths of the band.

The next two tracks are rather… indistinguishable. Island Life and Skywards are a little bit generic Peter Gabriel meets Blackfield, or something similar to Steven Wilson’s later releases. There are some great moments mostly with the keyboards and the drumming in Skywards and while they are enjoyable listens there is nothing attention grabbing here.

Kill the Orchestra is the emotional crescendo of the album and one of the more interesting offers of the album. It starts with a simple vocal/piano duet and it slowly evolves in to a wall of sound with many melodies and patterns from previous songs of the album which ties the whole record together. This is one of the best songs in the album with many of the melodic and experimental elements that made fans of the band fall in love with them. And to that I would add the closer Repeat to Fade as it seems like a continuation of all the elements of Kill the Orchestra and a nice closing act to the album.

Many times neo-prog releases wander a bit aimlessly between the progressive rock and pop rock elements without a solid decision between either, and the resulting sound lacks a bit of… oomph that would make the releases a bit more memorable. Day and Age navigates that hurdle and is a solid offer to any fans of Peter Gabriel era pop rock to see how that sound has evolved some decades later. It is relatively inoffensive and that could be a good thing or a bad thing for someone. Not sure how many new fans they will earn with this new release but it is always pleasant to have Frost* around.

The neo-prog subgenre has given us several interesting or great releases since it was re-introduced with a heavier and more modern sound about 20 years ago. In my opinion, Frost* is probably the best band of this sound, with Milliontown (2006) and Experiments In Mass Appeal (2008) being the perfect proof of that. This year’s Day And Age unfortunately does not exceed the level Falling Satellites (2016) and the first two great albums seem like a distant past. Of course the level of technique, the production and the general aesthetics of the band’s music remain exceptional. It is always nice to listen to such a good band, but when there is a lack of inspiration, the above cannot be enough. The two epics, the opening self-titled track and the emotional Kill the Orchestra impress mainly with their build-up, but the rest of the songs sound too similar, while the Peter Gabriel influence on the vocals is too strong. With just the fourth full-length album of the band 15 years after the debut album was released, Day and Age can be considered as a missed opportunity.