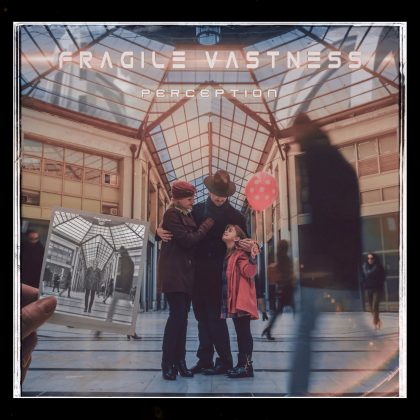 Fragile Vastness are a particular chapter in the book of the Greek progressive metal scene. Their debut album Excerpts… which was released in 2002 set high standards right off the bat. Its follow-up that came three years later Tribute to Life stirred quite an interest at the time and rightfully so. A double album in line with the golden era of progressive metal, in the mood for experimentation and with Ray Alder as special guest opened a new, promising page in the history of the genre in point. The future of the band looked bright but, unfortunately, its next step was delayed by twelve years. But here it is, nonetheless. Perception is now a fact and there are essential changes in the line-up, as well as the direction of the band.

If someone reflects how their life was a dozen years before, it is likely that they will conclude that twelve years is a long time. They look like a lifetime. Fragile Vastness is now a totally different band compared to the one we got to know in the early and mid-00s. The time when the progressive metal of Pain of Salvation had permeated the respective Greek scene seems to be long gone. Judging by their come-back, the mastermind Vangelis Yalamas is well-aware of it. Yet, the term “progressive” is as present as ever in the equation and links past with present.

The most striking about-face regards the vocals. The traditional male voice behind the microphone is not the case here since Elena Stratigopoulou has taken over. Her voice is suitable to their new direction, a direction that owes a lot to the alt-prog of the current decade and mainly to the Aussie take on the genre. Groups like Dead Letter Circus must be in Yalamas’ playlist, yet there is hardly a part where there is a clear intention of copying others.

The durations of the songs range from short to moderate, indicating a stab at making more focused compositions. The base of their sound is located in the tight and highly impressive rhythm section provided by Yalamas and Tsolakis. The guitars are somewhat mixed down but they colour beautiful the final outcome. The keyboards and string instruments fit well, too. As a whole, the arrangements and the production are classy, while the performance of each individual musician is impeccable.

The album’s main catch lies in compositions themselves and mostly in motifs that reappear. The album is definitely not short of impressive compositions. Heaven on Mars for instance, is a killer track compelling for repeated listens. But a few more parts like the acoustic break in A Wall of Glass which would add some variety, wouldn’t go amiss. A second issue, though minor, are the vocals. Elena Stratigopoulou has impartially a good voice, possessing a depth and range envied by many. But the vocal lines are not invariably inspired and unfortunately this is the be-all and end-all for alt-prog.

In spite of the objections above, Perception is a strong record. It will probably turn off the old-school Fragile Vastness fans due to the abrupt change of their style, yet it is this change that we should welcome. If they refine what they started here when they make their next move (as A Tribute To Life did with Excerpts…), there will be then more than likely something to keep us engaged for a long time.

Terminating a year-long absence, the band strikes back with a retooled line-up almost from the ground up, where the singer Elena Stratigopoulou is on the vocals and Vangelis Yalamas provides the guidelines, aiming for a new direction. Latter-day Fragile Vastness embrace an alternative version of the progressive sound, shedding their metal past. It is a change that will surely take by surprise those who expected the sequel of their previous album. While their music nods to past bands like Rush, it inches now closer to bands in the vein of Karnivool and it is generally adapted to contemporary forms of music that render Perception unusual for Greek standards. Great emphasis is placed on the guitar work without diminishing the role of the other instruments. A meticulous outing (where Terry Gorle chips in A Wall of Glass – another surprise) which will appeal to an audience that seeks true progressive music.