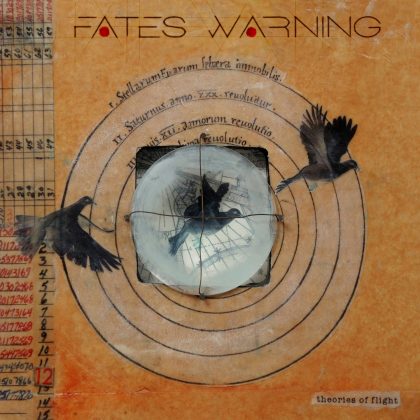 The case of Fates Warning is so special that the American veterans do not fully fall anymore into any general conversation about prog metal, the modern or older music scene. For many years they have been imprinted in the consciousness of all (not only of their fans) as a separate ensemble that acts in parallel with each “today” without a trace of worship for the past. What makes them unique is probably this emotionally sincere, deep and direct thing in their music, this mystery that is both witty and yet simple in essence. This element always surprises us positively, far exceeding the level of expectation, adding other notes on the soundtrack of our lives.

Creating an album for many “veteran” musicians out there is a typical process. Little steps, 1 … 2 … 3 in a row so as to produce a final result which will give the listener a sense of satisfaction. In some cases-rare ones compared with the trash on the market- this sequence produces albums in which while it is clear that the band has followed a plan to compose the material, they remain extremely close to what we call “inspired.” These considerations are made after constantly listening to Theories of Flight by Fates Warning and the intense feeling I have is that these songs would fit much more in the post-Parallels era. Back then the young Fates were shaping progressive metal and created music without carrying the huge legacy that they have built until today. Theories of Flight is free, unforced, at no point trying to prove something, or push the listener to perceive something hidden. Every aspect of the eight compositions is visible and you just have to let it touch your soul.

The album is characterized here and there as “the most metal album of Fates in years.” Although I think that Fates never stopped playing metal, I must admit that the traditional timbre of their sound in the 3-4 albums that preceded this one, did not have the leading role. Leaving experimentation aside (as they had done in Darkness in a Different Light), in Theories of Flight Matheos hardens the guitars, adding several classic metal spins (White Flag, SOS, Like Stars Our Eyes Have Seen) approaching the concert aspect of Fates and the “songs that people like” without selling off his art. The repeating mid-tempo riffs that preface / interrupt / accompany the sweet vocal melodies and trademark sing along parts of Ray Alder, usually are those that motivate the audience to go wild, jump up and down, sing with all their soul (at least in Greece). The new album includes seven compositions and I bet that will fulfill this description, which is the greatest success of Fates from the 90s onwards.

Singling out the unique The Light and Shade of Things as one of the best compositions of their career (due to escalation, voice melody refrains, central riffs, lyrics, a solo passage somewhere in 1:25 that smelled of Gilmour and many other priceless emotional factors) it does not make sense to look for fillers or tops. With uniformity and harmony reminiscent of A Pleasant Shade of Gray, the songs alternate, dispelling any possibility of repetition or the listener’s fatigue. Original ideas, old ideas, rehash…. the whole sounds so well played and meaningful. Fates always give their best in every album without ever creating any second thought about their intentions as artists.

Twelfth album for Fates Warning and although I expected something similar to their previous one, Theories of Flight left me quite speechless. It’s more metal and more technical (they were probably listening a lot to Perfect Symmetry when composing it), the production is in the style of Arch / Matheos and Darkness in a Different Light, i.e. modern and digital, with a Ray Alder straight of the ’90s. The tracks are all of the highest level, and Seven Stars, The Light and Shade of Things and The Ghosts of Home stand out. If there was a song like Still Remains, we would be talking about a monumental album! In my opinion it’s their best since A Pleasant Shade of Gray.