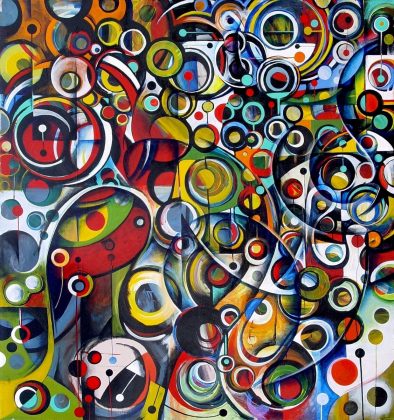 One of the features of progressive rock is the multi-collectivity of the sounds and musical idioms in one record or even in a single song. A band of this kind is Farmhouse Odyssey, a group from Arcata, California, who were founded in 2012 by Alex Espe (vocals, keyboards), Alex Pepe and Aaron Laughlin, guitars, Ian Taylor, bass and Thatcher Holvick-Norton (drums). Farmhouse Odyssey, who play mainly progressive rock, enrich their music with psychedelic elements, jazz, funk and world music, thus creating a special blend.

Their debut album was released in 2015 independently and caused a stir around their name with its quality, resulting in several concerts to promote it in North California. Without wasting any time in-between concerts, the band went into the studio and recorded their second work under the title Rise of the Waterfowl, with Aaron Laughlin, their guitarist, as producer.

Modern Fusion for the masses

The truth is that I hadn’t heard of Farmhouse Odyssey and the first thing I did when I listened to their album was to think of the genre their music could fall into. The majority classified them as symphonic prog but besides that, their sound includes indie/ethnic progressive rock and fusion with distinctively American sound elements.

Rise of The Waterfowl consists of nine songs and lasts for a total of one hour, but due to its cohesion and the character of the pieces, one thinks that it lasts less. The production is stunning, giving the necessary space to each instrument, while at the same time it is warm and clear, bringing in mind the sound of Kansas. Speaking for myself, the rhythm section is in the spotlight because it is quite technical without outshining the groove of the piece. The guitarists tackle the tracks with a more contemporary perspective compared than the classic jazz-rock guitarists by being quite rhythmic and less soloists, while the keyboards could have a more active part, with the vocals being the weakest part of the band. I don’t doubt the diligent performance of Alex Espe, but I think that a warm bass voice would be more compatible than his high-pitched nasal one.

The band’s influences by the Mahavishnu Orchestra are diffused throughout the album and are mainly present in the guitar solos, as are influences by Weather Report in the drums, while when playing in a low tempo they remind of ‘60s jazz/blues bands. The songs bring to my mind  Tales from Topographic Oceans by Yes without so many keyboards, especially Brain Song, Slumberless Sun, Space Revealed where the leitmotif is embellished with time signature changes, dance jazz parts and melancholic references to Genesis, while Shipwreck, From the Night Sky are simpler in structure and quite dark, where the former being in the middle of the album gives a breath, while the latter, which is in the end, clears the mind from the complexity of the preceding hour. Daybreak and Speedbump Catalyst are satisfactory but do not add something more to the album.

Farmhouse Odyssey deliver a modern progressive rock album where the addition of many different genres makes their music interesting and not a hotchpotch of ideas, maintaining at the same time their own identity in their sound. The whole album flows quickly, but it won’t occupy your playlist. This album is mainly addressed to jazz-rock/fusion fans, without implying that someone irrelevant with this genre won’t have fun. Quite the contrary, it will make him search for new things as well.

The lyricism of the music of Rise of the Waterfowl and the technical grounding of the members of Farmhouse Odyssey are two of the numerous interesting elements a prog listener can find here. If the compositions were equipped with a more colourful outline (the meaning of identity is restrictive for an attempt that is so “open” to interpretations), then we could talk about a revelation of the New Year. They are still young, so we can anticipate better things in the near future.