If the recent detection of gravitational waves has confirmed Einstein’s theory, thus becoming the greatest discovery of our time, would the live concert of  Agusa and Methexis, at the time the protests of Greek farmers were taking place at Syntagma Square, be proof of the theory of parallel universes? What’s for sure is that those who toubled themselves to visit six d.o.g.s. on Friday evening had their expectations more than just met, especially those who had travelled several hundred kilometers from different parts of the country. You see, watching two great bands of the progressive music in their early years, in absolutely underground conditions, is a chance one is rarely given. 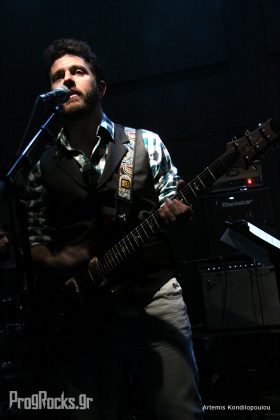 The atmosphere at the club entrance was particularly friendly. Those who had come were fully aware of what they were going to attend. Among them were quite a few dear friends and 12 editors and contributors of ProgRocks.gr. Following greetings and embraces, it was time to go through the main entrance. The place had quite a few people without ending up overcrowded. Simply put, the audience were “just as big as it should be”.

Shortly after 9pm, Methexis, the band of the talented Mr. Kissonas, set foot on stage. It was the first official live show of a band that caused a sensation in discography, both in Greece and abroad, over the past year. During their fifty-minute performance with excellent sound, we enjoyed a very comprehensive and cleverly structured setlist with pieces mainly from their recent work, as well as from 2011’s The Fall of Bliss. 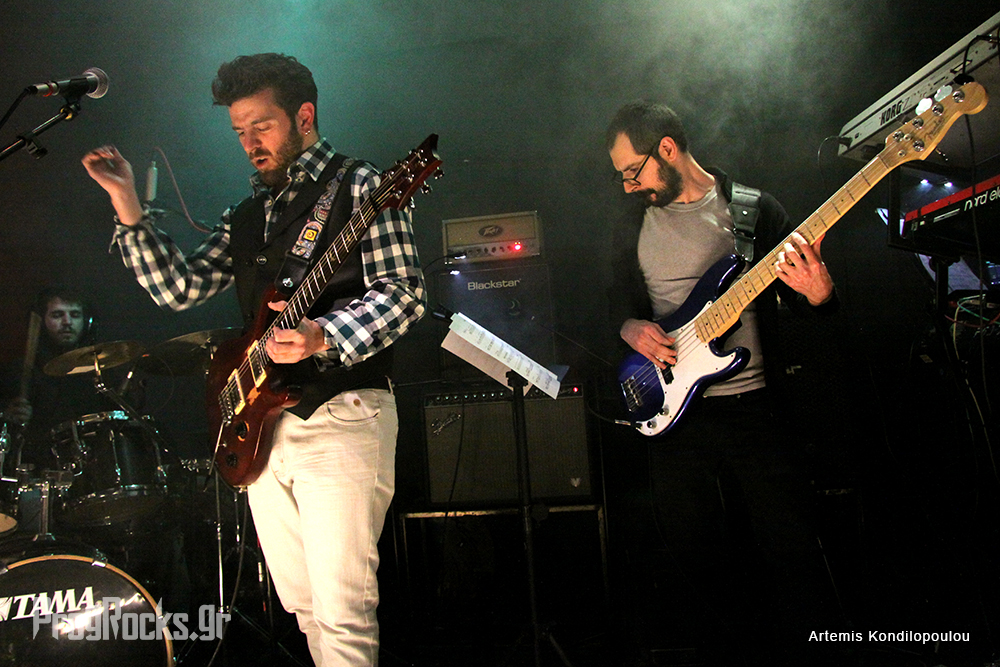 With no intention of being unfair to the members of the wholly excellent band, what stood out during their set was the amazing stage presence of Nikitas Kissonas. We had only known of him as a great composer until he presented himself in front of us. During the live, we realized that he is a great frontman, too. What I mean is that when you see on stage an alternative guy that does amazing things with the guitar, masters the pedals and the sound, and at the same time not only sings, but also moves with incomparable (and elaborate) theatricality (a proof of that is his performance of Lines on a Bust), and this is not Steve Vai, then it must be someone who should be regarded as top-notch. Methexis won over the part of the audience which was caught unaware, the fact that some didn’t know that in Suiciety it’ s not Kissonas  who sings but Joe Payne (The Enid) didn’t bother anyone, and those who knew it, saw a music star rising – from now on in a leading role – on concert level. 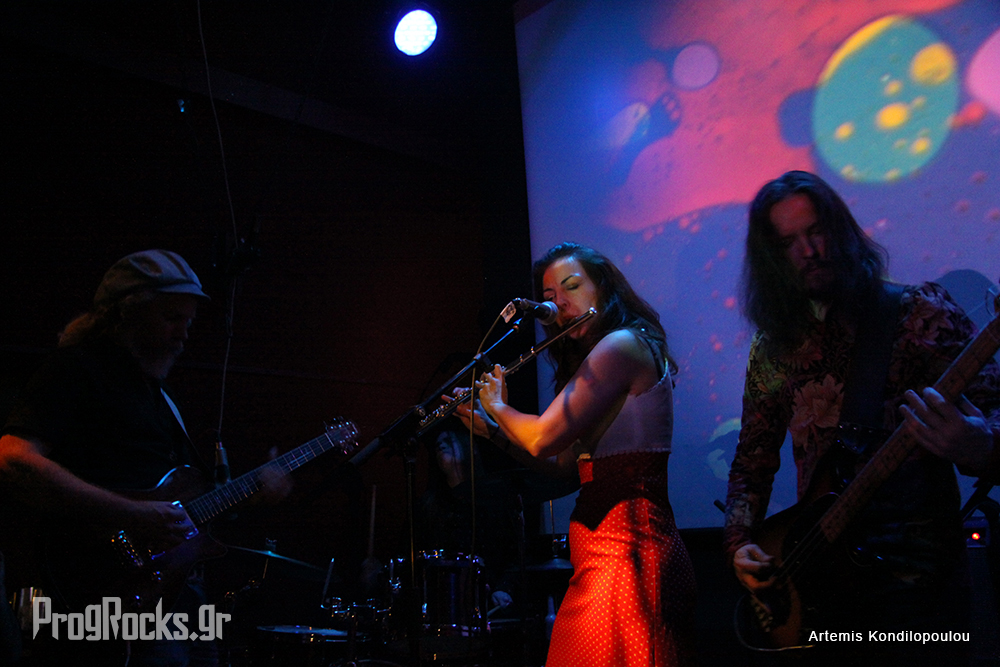 After the short break, it was time for the audience to board the time capsule of Agusa for about an hour and twenty minutes, and they accomplished their mission with full commitment. They played much better than their studio performance (and did exactly what they had told us here) and getting the particularly positive feedback of the audience, they played freely and “without a safety net”, and unfolded before us the ancient pagan Nordic timbre of their music through pure and absolutely sincere 70’s psych-prog. They totally vindicated ProgRocks.gr who chose Högtid as our top album of 2014 (link). 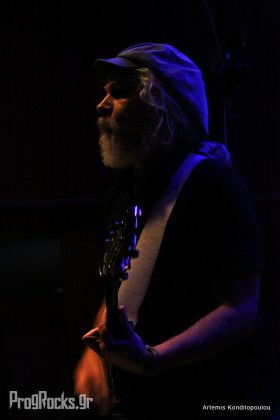 Jenny Puertas stood out, giving the cutting edge with her flute, but also (inevitably) as a beautiful female presence. The one though who really rocked, was Mikael Ödesjö, the “old school” guitarist, with an imposing stage presence, with his back almost turned to the audience; you would think he “directed” the band. With a quite bold and at the same time ambitious performance, the likes of which one might hear only in the 70s by great guitarists of the time, each note of his, either in the rhythm section or in the wild solos had special “gravity”. And to top it all off, the warm Hammond sounds by Jonas Berge layered the evening with an absolutely vintage colour, while the surprise came from the drumming of Tim Wallander, from which we enjoyed dynamics that (perhaps sensibly) we hadn’t heard in the two studio albums of the band. Also taking into consideration the direct and immediate playing of Tobias Petterson on the bass, the quintet from Sweden were a successful live act, not simply as separate units, but as a closely-knit band that is obviously driven by its own music and in a live performance they perform in comfort much more aptly, however strange this may sound. Agusa managed to thrill us and -most importantly- make us smile for the rest of the night after leaving six d.o.g.s. The greatest moment of their performance was probably the encore, when the psychedelic background was painted in the colours of In the Court of the Crimson King and they played the second part of Gånglåt från Vintergatan leaving us with our mouths agape while staggering out of the venue. 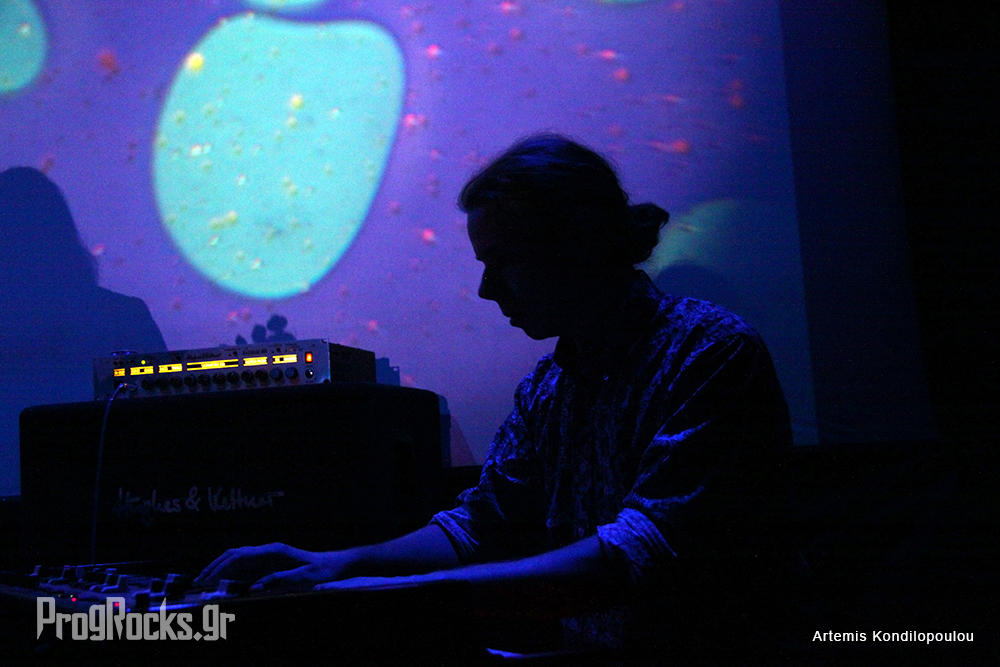 We cannot know how many of the audience of the concert belong in the category of “first album-obsessed” listeners but we can say with absolute certainty that after the live of Agusa and Methexis in Athens, all of us, without exception, fall in the category of “first live-obsessed” fans. Many congratulations to Sound Effect Records for the organization, for a genuine underground night that we will all remember for some time.

Jargon and his band perform live in the studio

Tuesday September 15th, 2020 News Comments Off on Jargon and his band perform live in the studio