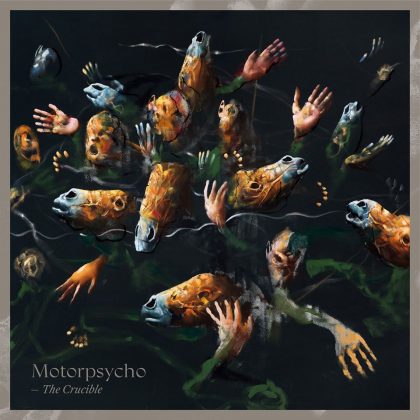 Stickman Records announced the release of The Crucible, the follow-up to The Tower by Motorpsycho (our reviews here) which was voted as #1 album of the year 2017 by the editors of progrocks.gr. The announcement reads as follows:

We are beyond pleased to announce the coming arrival of a new Motorpsycho album, titled “The Crucible”! Release date is set for February 15th, 2019 on vinyl, CD and digitally. More details will follow, but here’s a little taster for you:

Crucible
noun
cru·​ci·​ble | \ˈkrü-sə-bəl
1: a severe test
2: a place or situation in which concentrated forces interact to cause or influence change or development

Both visually and musically, The Crucible starts where the last album The Tower ended, but it soon takes on its own hue, and it is clear that it cannot be called a ‘sequel’ as such: this is very much a step further out than anywhere the band ventured on The Tower. While it is broader lyrically speaking, it is even sharper focused musically and, if possible, even more idiosyncratic and insular than ever. Unarguably a Motorpsycho album, it is one that is going to make the novice Psychonaut’s head spin, but feel comfortingly unfamiliar to the acolyte. Motorpsycho was always too gnarly for prog nerds as well as too musically unwieldy for punks, and as their appeal becomes ever more selective, they are still proudly falling between all cracks, stools or chairs one might think of putting in their way. ‘Prog rock’? Call it Motorpsychodelia!

The Crucible was recorded at Monnow Valley Studios in Wales in August 2018 by Hans Magnus Ryan (guitars, vocals), Bent Sæther (bass, vocals, sundry) and Tomas Järmyr (drums), with co-producers Andrew Scheps and Deathprod. To these ears, and to the band’s satisfaction, this co-production ploy worked out wonderfully, and has resulted in a beautifully crafted record, smaller in size but at least equal in ambition to its celebrated predecessor. It is somehow both more focused, and denser in content, but also compositionally more ambitious than The Tower. One would perhaps think that this necessarily results in a diminished sonic assault, but the album still packs a wallop like a good rock record should. And – ‘for once’ some waggish tongues would say – does not outstay its welcome.