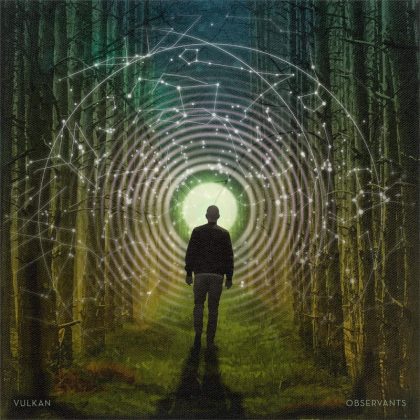 Vulkan, a band from Sweden, appeared very discreetly in 2011 with their debut Mask oF Air which was not successfully promoted (if there was such intention), so that album was lost in the large number of releases. Even though this album may not have been the most enterprising and mature specimen of alternative heavy prog of that era, it entailed much talent and very interesting ideas in depth and aesthetics, particularly structured, probably underrating the potential of the quintet.

Five years later, Vulkan returned with Observants, much more mature and ready to win the recognition they deserve.

This is the second release from (relatively obscure) Vulkan, a heavy progressive band which was introduced in 2011 with their debut Mask oF Air. Five years later, they deliver Observants, with an unchanged composition. While remaining generally in the same style, filtering their influences results in a somewhat different sound from the one we heard in Mask oF Air.

From their initial commitment to The Mars Volta, their second release carries us to even more alternative paths, where the element of indie / alternative (see. Radiohead, Muse) has intruded (pleasantly) in the alternative heavy prog, reminding of Tool and Karnivool (their main references). The significant influence from the above mentioned bands leaves little room for innovation, but the album’s structure, the interesting variations and the impeccable technique contribute to a positive outcome. The onus is put on four compositions of 7-9 minutes each, with shorter themes in duration, operating as bridges.

The main element here is the average speed based on the rhythm section and especially on the bass lines of Vincent Andren, impregnated with the exceptional (plain but effective) touches of David Engström on the keyboards. The pieces seem to follow a certain pattern: they start somewhat sluggishly, unfold with the addition of the guitars and take off towards the end with excellent vocals, leaving the listener to expect more than (just) the 40 minutes of Observants.

It could be one of the very good releases of the year in the heavy progressive scene that is lately on the rise. Recommended for enthusiasts of Tool, Karnivool, The Kindred etc.

In its structure Observants is a much more homogenous album compared to the much more verbose Mask oF Air. The flow of the album highlights the ambience, favours repetition and captures the listener through the alternation of songs with interludes and instrumental pieces that are anything but fillers (eg. listen to the amazing The Luning). The style remains alternative heavy prog, but this time with the balance tilted even more in the melody and the style referring mainly to Karnivool and secondarily to Butterfly Effect or Abigail’s Ghost in its proggier parts. Observants is not just a very good album, but also the ideal opportunity for Vulkan to introduce themselves to the wide prog audience.