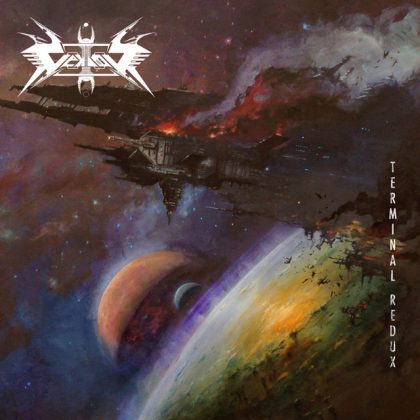 Metal circles are in need of heroes. They need bands that come to stay, to offer stones to the structure firmly built since the 80s. The search for the next best thing is a sacred process to the hard sound and I think that this obsession led to many of the latest hallucinations. The enthusiasm originally diffused, is usually replaced after a few years by moderate opinions. There are numerous examples and even more cases of groups that have disappeared, swept away from the spotlight. Fortunately, Vektor, although in a small corner of metal (aka technical death / thrash), do not seem to have had bad luck. Quite the opposite, since they have joined -rather by chance- the thrash revival movement of recent years and managed to attract an audience to whom they reminded somewhat of Voivod and  Death of the Scream Bloody Gore and Leprosy era. The amazing Outer Isolation released in 2011, was meant to put them for good onto the map of the most important newcomers, and now, five years later, their new album is a priori one of the most anticipated releases of the year.

With Terminal Redux, the Americans manage to meet the expectations, keeping all their weapons warm. Without disappointing any of those who were delighted with Outer Isolation, they keep their disharmonic melodies and add elements to their sound, that you can call potential experimentation, always within the framework of metal. With the sci-fi concept adding breadth to an already indigestible music, it is evident that the group continues to make tough choices. The work done with the sound is detailed and, with the production maintaining excellent balance between the “revival analog” and the digital era. And though beautiful and eerie their creation might be, the more robust it could become if in some cases they managed not to cause confusion with their compulsive alternations. While most pure tech death / thrash metal pieces are riveting (Pteropticon, Psychotropia) throughout their duration, when they choose to complicate their sound with different sequences of riffs (which I find unnecessary), the true essence is somewhat lost and the impressions are toned down. The most striking example I think is Cygnus Terminal, which has excellent guitar playing, but is too loaded.

By avoiding trying modern approaches (or even inventing their own) and by remaining loyal to the old school thing, it is certain that Vektor become even more likeable to the relatively small portion of listeners who have been following them already. If one believes that by maintaining the 80s-90s outlook on music and by playing in one of the most inaccessible musical settings of metal will be able to create a new stream or lead the best bands of their generation, he is rather daydreaming. Vektor have managed to put their name next to that of Death, Voivod, Coroner, Cynic, Atheist etc. And that alone is a huge deal in the microcosm of metal universe.

The third nuclear explosion in the camp of the American metallers holds a slight improvement of the sound in relation to the past and a right balance between aggression, melody and technique. Despite the welcome new tricks in the composition, their new work on the whole stands slightly below their two previous attacks. However, the album is beautifully scaled with Collapse (an attempt for Fade to Black!) and Recharging The Void throws ideally the curtain. To sum it all up, Terminal Redux is necessary for the development of Vektor and confirms that it is the best “full metal” band of our times.