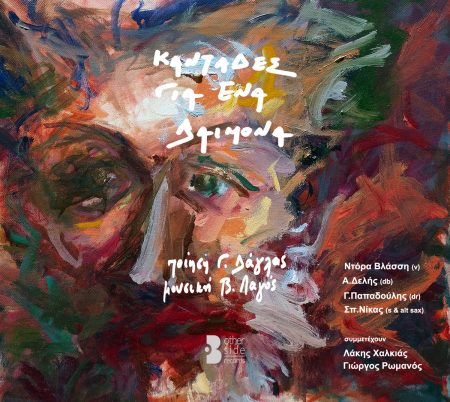 Guitarist and composer Vassilis Lagos acquainted himself with the poetry of Giorgos Darlas from Ithaca in March 2015 in a bookshop in Exarcheia, Athens. Since then he devoted himself to setting to music the poem collection presented by the poet at that bookstore. The project is not at all original at least in Greece, but the result is far from anything someone could think of. Lagos is accompanied by three very good musicians (John Papadoulis – drums, Alexis Delis – double bass, Spyros Nikas – saxophone) and Dora Vlassi on vocals, and in “Cantadas for a Demon” we also meet two great figures of Greek music as guests: Lakis Halkias and Giorgos Romanos.

The modern Greek music is enormously influenced by another art form, poetry, to such an extent no less that in many cases the latter overshadows music itself. One more proof for the above statement, is this year’s excellent work of Vasilis Lagos entitled Cantatas For A Demon. Yet, we should stress the point that in the case of Cantatas For A Demon, which is the title of a poem’s collection that is set to music here, there is a remarkable difference: George Daglas’ poetry becomes one with a completely different musical style -even for the poet’s standards I assume- let alone with the stereotypical approach that is observed in Greece since the mid-seventies.

These warming-up observations are obligatory, since a respectable review should be oriented towards the importance and aspirations of each venture. This becomes increasingly difficult when the adhesive material of such nexus is an overly tensional element: the clear-cut jazz influences of Lagos (whose influences are not confined to jazz) and the poetry of Daglas bump heads, while at the same time a parade of sounds takes place with remarkable presences. Unfortunately, since my acquaintance with George Daglas came through Cantatas For A Demon I can’t be positive how effectively the poetry is rendered, but we are informed that Dora Vlassi, the main singer, takes on the task to craft the lyrics to fit into the context of the compositions.

Yet, what grabs the attention of those of Greek music is two names: Lakis Chalkias and George Romanos. Moving to the innermost, namely the pure musical side of the release, the diversity and daringness that emerges is really astounding. Jazz and fusion, along with progressive metal touches lent by the guitars and moments of traditional music are sufficient words to underline this “adhesive contrariness” that Vassilis Lagos, Dora Vlassi, Alexis Delis, Spyros Nikas and Yiannis Papadoulis offer us.

It is practically impossible to highlight specific moments in records of this caliber but I think it is justifiable to high spot the guest contributions of Romanos and Chalkias. In Manthos Stavropoulos, a song in memory of the famous Greek singer, Chalkias’ stentorian voice was the only viable option for a song that flirts successfully (minus the attention whoring that is a must the last few years) with the depth of music of Epirus, keeping the required distance. Respectively, the equally great singer George Romanos takes care of the vocals in Pyre, an energy consuming song that I have probably heard more times than its mates, along with the superb Durruti.

Cantatas For A Demon is undoubtedly the revelation of the year and one of the best records someone is about to listen to. Such bold ventures are scarcely attempted or should I say are hard to spot.

Setting music to poetry is a daring project to begin with, let alone when combined with original forms and mixing expressive pathways, not exactly compatible to the ears of most. The combination of jazz and metal with experimental and mostly prog mood is unusual (with Greek lyrics at least) and sounds delightfully fitting with the protest poetry of Giorgos Daglas. Despite the shortcomings of the production, especially regarding Vassilis Lagos’ guitar sound, the success of the project is undeniable, even more so because we are not dealing with narrative ambient ‘excuses’ here, but with eight valuable compositions with a specific structure that impress with their untamed spirit. Among them I pick Durruti, Women and Pyre where the great George Romanos participates.