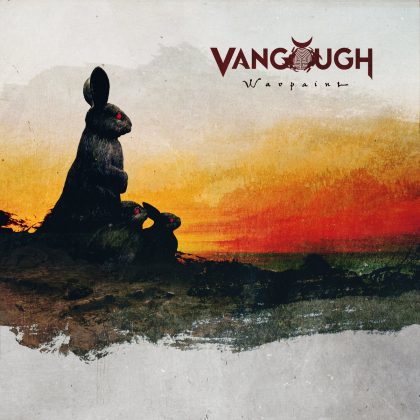 Vangough belong to those bands that start and continue their career quietly, gaining and maintaining a loyal audience, by being qualitative and developing their sound from album to album. Their beginning in discography was Manikin Parade in 2009 and until 2013 three more albums followed in the same line keeping a balance between progressive metal and progressive rock and at the same level of quality (perhaps Between the Madness in 2013 stands out a bit). Four years later they release Warpaint with the hope that this will be the big leap for the trio from Oklahoma.

It could be, but…

Vangough come from Oklahoma and make music in the troubled genre of progressive metal. At a time when the “beasts” of the genre offer mediocrities (with some exceptions of course). First of all, in Warpaint the taste that is left very intense in the end is how the sound is heavily influenced by bands like Tool, Leprous, Alice In Chains and others with a relevant sound. The basis therefore is the appropiate. All that remains is to see if the band can bring fresh ideas to make the album special.

I’d love to say yes… and the beginning of the album helps in that direction. Morphine, the album opener, begins with a robust and slow riff, and the rhythm section builds up some good foundations. Clay Withrow on vocals makes a good effort to sound like Maynard James Keenan, but in the most dynamic and faster parts of the track his weakness is evident. The black vocals in parts help to bring back a potential in the piece which is quite pleasant. Withrow’s vocals can be quite influenced by Keenan, but offer enough feeling and a 90s vagabondage. This is quite important for a genre that has had several times reviews for singers without emotion in their voice.

The common feature of all the tracks is the dark mood with a strong rhythm section and a style that simply combines the sound by its influences. There are several variations, with galloping riffs to take over acoustic parts and vice versa. This variety in sound can give a pleasant touch to anyone who listens to the album, but everything seems quite limited by the influences that are even predictable.

Warpaint rightly or wrongly can easily pass unnoticed. Not because it is a bad album. The 51 minutes of it are pleasant to listen and undoubtedly Vangough are excellent musicians. But they are likely to be very close to their sound influences, resulting in their personal character being lost in a sound Tool meets Pain of Salvation.

A bit of  by early Pain of Salvation influence (to whom they have played support), a bit of Tool in their gentler parts, Opeth-like riffs of their middle period and Alice In Chains define the coordinates of the sound of the Americans. The trio allows the music to breathe and the whole result flows pleasantly but indifferently. The compositions with some scattered good moments tucked between the songs, are framed by moderate vocals, impossible to lift up any good ideas they have. There are some elements that Vangough could develop to present something superior. Here the result is to improperly use the term progressive and refer to influences from Alice In chains, since the sound is very typical to be characterized as prog and on the other hand, Alice In Chains have the ability to write complete songs, something that I wish Vangough will acquire in the future.