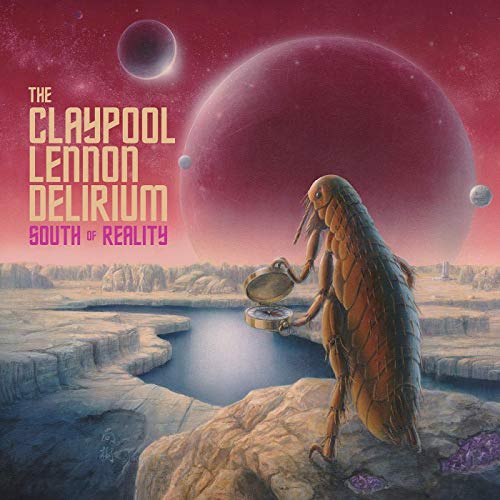 Monolith of Phobos – the first album that came into being through the cooperation of Les Claypool with Sean Lennon – was one of the pleasant musical surprises of 2016. The doubts spawned by the collaboration of John Lennon’s son with the legendary bassist of Primus were dissipated by an awesome album. With psychedelic rock as their initial basis, the two different (or maybe not so different) worlds of the two artists were mixed together leaving as a legacy some magnificent compositions. Their come-back three years later concerns a big part of the rock audience.

A great collaboration that gets better and better

Les Claypool and Sean Lennon first teamed up in 2015, when their respective bands Primus and The Ghost of a Saber Tooth Tiger toured together. An on-stage jam session led to the formation of their joint band, The Claypool Lennon Delirium, which this year released its second album, South of Reality.

On their sophomore full-length album, Claypool and Lennon continue to combine their talents and craft wonderfully, producing exciting and creatively complex material, full of musical variety. Both artists contribute equally, so there is an obvious balance in the album as a whole. Les plays with much more discipline than with what we’ve known from his primary band Primus, while Sean has great songwriting skills and he is probably one of the finest musicians of his generation. The compositions on South of Reality are really good and at times impressive. Groove, progressiveness and psychedelia blend together in perfect doses. The songs flow well structurally while the overall atmosphere is very mellow and spacey. The production follows the style of the album, taking the feel back to the 70’s, but also with some modern rock freshness.

The latest Beatles and early Pink Floyd periods are still the biggest influences in the songwriting process of this dream-team duo. Especially this goes for Sean’s songs which are very much connected with The Beatles in many aspects, especially the vocal lines. From the very first tones and vocals you get the impression of awakening somewhere in the late of 60s while listening to Sgt. Pepper’s Lonely Hearts Club Band. Some of the best moments here are: The Beatles-esque dreamy vocals harmonies in Blood and Rockets, the masterful funky basslines by Claypool in Easily Charmed by Fools, Sean Lennon’s extraordinary singing in Little Fishes and the successful experimental approach in Boriska. However, the highlight of the album is Amethyst Realm, a mesmerizing song with a strong nostalgic Floyd vibe, tasty guitar sound and stunning atmosphere. The only thing I miss is an instrumental track in the vein of There’s No Underwear in Space from their debut. I think it would be a perfect closer in this wonderful release.

Is South of Reality essential? Not really, but it is definitely an excellent work which exceeded all expectations. If you are a prog rock fan, do yourself a favor and take a fabulous musical journey with The Claypool Lennon Delirium.

Listening to South of Reality, it becomes clear for the get-go that all fields have been seriously refined compared to Monolith of Phobos. Having achieved the right chemistry in their previous album, the two composers turn their attention to the tone and the tiny details that will make the final result more rounded and something more than a (be it successful) experiment. A lot of effort has been put on Lennon’s vocals and the same goes for the melodies and the hooks of the compositions. The arrangements remain simple and right on spot where Claypool’s bass is, naturally, the backbone of the sound, but doesn’t dominate. Assessing roughly the style of the album, it could be described as a mixture of Pink Floyd (Barrett era) with the John Lennon side of The Beatles (post-Revolver era) and all this moulded in a more progressive context. Even so, it is hard to pinpoint precisely this collaboration which in spite of its peculiar character, it could well appeal to a much wider audience.