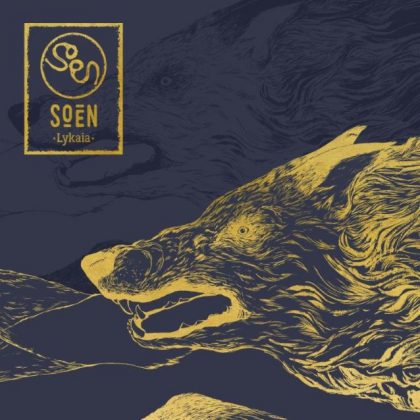 Most of the times, the third album in the discography of a band is the milestone for their future course. Normally, the sound has already acquired an identity, the band has shaped their character and the songs are almost entirely new compositions, while after the third project it is evident if a band will make a commercial success or not. Certainly, there are cases that do not belong to this informal rule, but they are rather exceptions to it. Hopefully, Soen released their third album, who after Cognitive (2012) and Tellurian (2014) have come up with Lykaia this year, which could not be left unremarked by Progrocks.gr, since the band of Martin lopez (ex-Opeth) and Joel Ekelöf has made its presence felt in the progressive metal field.

A moment of stagnation instead of progress

Soen released their third album and at the point where I expected them to build on the very good Tellurian, I would say that they rather left me wonder. Lykaia finds them with two changes in the composition, where on the one hand the guitarist and producer of the previous two albums (Joakim Platbarzdis) give his place to Marcus Jidell, and on the other hand the keyboardist Lars Åhlund is added. The change of the guitarist results in an album with some interesting solos, but the riffs do not have the volume and prog nature of the past. Well, do not think that it is a different band since the influences by Tool and Opeth are spread out in the album; fortunately the similarity with Tool has been limited considerably, and some moments are reminiscent of Riverside of Anno Domini: High Definition mainly because of the keys that give a more 70’s rock feeling.

Technically the band stands on a very high level, as in every new release, and the production is at least formidable, because everything sounds loud and clear, with the vocals being probably a little ahead, but this is justified because Joel Ekelöf has a great voice with a characteristic timbre. A key difference from the previous albums is that here one can find songs like Lucidity and Paragon which are calm, simple to play and drift your soul away, but are somewhat monotonous, not adding something extra to the record. On the other hand, there are the most aggressive and groovy ones, like Sectarian and Sister, which remind of Tool and bring to mind Cognitive, and as a result almost half of the songs do not evolve the band. Of course, the album has some very good moments like the guitar solo at the end of Orison or the oriental melody of Jinn or the whole of God’s Acre that closes the album, but in my opinion they are not enough.

I believe that in their third album Soen rather than developing the sound they began to build in Tellurian, they chose to capitalize on its success by writing “easy” songs, relatively commercial and less prog ones. Maybe it has to do with the change in the composition, but with bands of that level excuses of this kind don’t have a place. Surely this album will appeal to several prog metallers who do not share prog as their favorite genre, but the rest of us here at Progrocks.gr not belong in this category.

Soen in their third step are still loyal to the path they mapped out with their two first projects. Excellent production, technically faultless musicians, exemplary production in an album that honours the best way their influences. A Perfect Circle of the extraordinary Mer De Noms, Tool, Opeth of their middle period in the calmer parts and the recent Katatonia are found all over in Lykaia. The vocals (always clean) without exacerbations, arranged in the “catatonic” frequencies the genre “requires”. The album flows pleasantly, but the lack of minimum originality is unjust to the musicians themselves and makes them more as a tribute band of this particular sound. While they are doing it the best way possible, they do not excite the listener. Fans of this sound may have found one of the best albums of the year. As far as I’m concerned I will listen again to Lucidity the little Gilmour-al  gem and hope in something more original in the future.