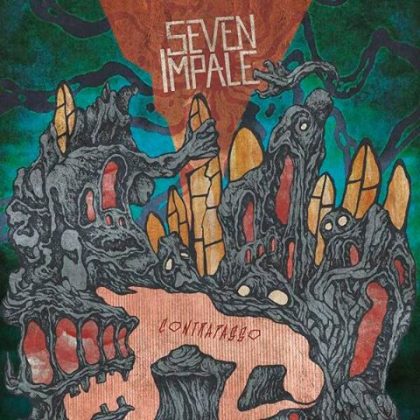 Seven Impale belong to that category of bands that you love to love. That is because they combine the enthusiasm of youth with the creative passion for progressive rock, without being attached to any of their influences and without any compromise to achieve any kind of success. Two years ago they amazed us with City of The Sun and the album climbed too high in our annual chart for 2014.

As expected, Contrapasso picks the interest of more listeners, though the band does not seem to have any intention to make it easy for the audience. Behind this beautiful cover art, analyzing the music of Seven Impale is a hard and yet unexpectedly enjoyable task.

From light to darkness…

…and from the “sunny” second album City of the Sun to the dark and unearthly Contrapasso. From the cover artwork to the song titles and the vocals, the atmosphere is way gloomier in the new work of the exquisite Seven Impale. The Norwegians keep stirring our imagination in their new album as well, since they experiment in new paths that include gothic and electronica influences to heavy progressive and fusion. Vocals are distributed among more band members and constitute one of the changes in style, matching the darker and heavier compositions.

Extreme experimental elements (see e.g. Arcturus, Leprous, Dead Can Dance!) meet the sounds of Frank Zappa and Jaga Jazzist in a production that sounds definitely rawer and murkier from that in City of the Sun. The duration of the tracks remains long but the “dead bands” in the music (and the duration of the album) have increased and this does not necessarily help the flow of the album, even if it contributes to the obscurity that builds the character of Contrapasso.

The sax plays a protagonist role, either adding (in some places only) melodies or as a second main instrument along the guitars, which range in this record between heavy prog and heavy eclectic, as if you listened to Van Der Graaf Generator in full distortion.

The first half of the album along with Serpenstone constitute the stronger parts of Contrapasso that exhibits no coherent structure which might confuse, maybe tire or elsewhere excite the listener. “I’ve reached the final conclusion. The epitome of confusion.” And nevertheless, it is this confusion that is so attractive from a group that, it appears to me, will not cease to surprise us!

The thing I love about Seven Impale is that their music doesn’t bear any residues. They do not consider themselves bound to follow basic rules and influences, and this attitude rewards them (artistically). Their second album complements or better deepens the perspective of the Norse for progressive music and give us one of the best releases this year. With key differences the variety of rhythms, melodies and primarily style in comparison to City of The Sun, Seven Impale most worthily represent all uncategorized bands of their era. The network of their influences includes the Norwegian “avant-garde” metal scene (Arcturus, Ulver, Vulture Industries), ska and ambient / electronics, and thus Contrapasso is difficult to digest. And if there wasn’t some riff repetition (e.g. in Serpenstone) it would be even more difficult. Exactly as we like it.