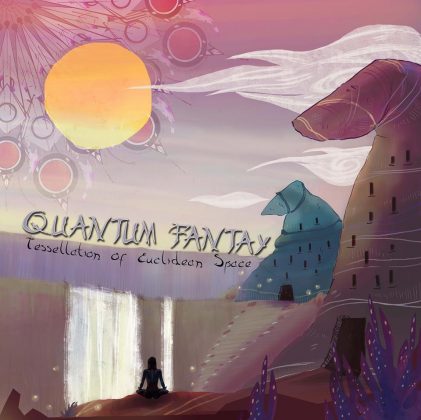 Tesselation of Euclidean Space is the seventh album of Quantum Fantay. The band exists since 2004 and up to this day they have released seven albums and counting, this one included. Space rock that nods to Ozric Tentacles is their area of expertise allowing also prog nuances to trickle in.

Ozric Tentacles are not just the reference point but the be–all and end–all in their sound. I don’t know if there is room for differentation in a place where the emblematic legacy of Ozric Tentacles and Hawkwind is dominating and the latest work of Quantum Fantay fails to answer this question.

Overlooking the somewhat slapdash cover of Tesselation of Euclidean Space whose style drops a hint of what you are about to hear, the music of Quantum Fantay flaunts a plethora of good elements but originality is not one of them.

The combination of the guitar (splendid work), keyboards and wind instruments is the basis where the album is built upon. From Tesellate onwards, nice melodies keep you company while the guitar that draws beautiful landscapes and the keyboards, at times more relaxed and some other playing repetitive and faster rhythms, forge almost identical songs, adorned occasionaly by the sounds of the flute or saxophone.

Skytopia which is divided in four parts occupies the best part of the album. Azure kicks off with a gorgeous guitar solo and the guitar melodies take on the lead on the second part before it ends up in an almost dancing outbreak from the keyboards. In the third part, female vocals achieve their goal to imbue an ethereal feeling and in the last part an unexpected jazzy turn takes the edge off predictiveness.

The rest of the songs are more or less along the same lines, but Astral Projection makes the cut for my favourite track. The band consists of skillful musicians, even though I’d like to make special mention of the guitarist Glenn Ployard who draws influences from fields other than the one he serves.

There is plenty of good music inTesselation of Euclidean Space and the musicians are skillful. The only black spot is lack of originality which is unlikely to be appreciated by wider audiences. The work of the band rests on positive elements but they clash with the constant feeling that you listen to Ozric Tentacles. The score of this review depicts this clash whose outcome is unfortunately predetermined.

Our Belgian friends never miss their randezvous time. A typical band of the new space / psych-prog genre. They had always been sticking to the way of Ozric Tentacles but the last few years they are trying to break away from the restricted environment of this particular sound with a considerable amount of success. The disposition for experimentation, with regard to the introduction of new sounds, which was evident on the previous album takes a backseat here. Nevertheless, the eight-minute Astral Projection with nice guitar passages stands out while the jazz aesthetic becomes tangible in the second and the fourth part of Skytopia where the saxophone takes the lead role. In not so many words, Quantum Fantay return to more mundane musical formats, putting together one more beautiful and enjoyable album. They are doing well up to this point but the thing is they don’t seem to make much progress. All the same, they give off a good sensation and that’s why they achieve to keep up the interest.