Music has always been inextricably linked to cinema, so it was only natural that the progressive rock movement, which flourished and peaked in the 1970s, would penetrate the fields of the seventh art with quite remarkable or even magnificent results.

Well-known and less famous directors of the time often entrusted the music of their films in great bands of the field of melodic hard sound of that era.

A very typical example of such a collaboration was that of the krautrock pioneers Can with their compatriot Roland Klick for his film, Deadlock. Deadlock is a modern, unconventional western thriller starring Mario Adorf and Anthony Dawson, in which a man walks around with a suitcase full of money in his hand and when he is found, he becomes an “apple of discord” in the hot desert. Throughout the film the scenes are accompanied by the amazing music of Can. 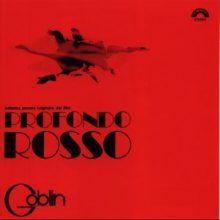 While cinema produced, in both Europe and America, new genres, new trends and pioneering ideas, a new wave of cinematic horror emerged in Italy, with films mainly based on pulp Italian crime / mystery books. The result, of course, was the birth of giallo. The leading figure of the genre was the talented Dario Argento, who was a rock fan, and wanted to capture this passion in his cinematic creations. So for his third film, Four Flies on Grey Velvet, he approached Deep Purple for the needs of the soundtrack, but in the end the collaboration did not take place and the music was once again taken over by Ennio Morricone. Although this collaboration did not take place, progressive rock dominated the Italian maestro’s next films, as the Italian band Goblin undertook to best adorn both Deep Red (Profondo Rosso) and Argento’s magnum opus with those stifling melodies, the amazing Suspiria, in which the Italian progsters deliver dark, spooky compositions that perfectly match the film’s mysticism.

Both films are typical examples of the giallo genre and are truely progressive, both cinematically and musically. Horror, dark atmosphere and music go hand in hand in a much more crude and clearly charming way than, for example, in the productions of American studios of that time and films with millions of dollars invested.

And as Argento’s love for music could not be hidden, the great Keith Emerson of Emerson, Lake and Palmer undertook the soundtrack of Inferno, which combines progressive rock with symphonic / polyphonic music in a strange but very appealing result. Suspiria, Inferno and the relatively recent but rather mediocre Mother of Tears (2007) are the three parts of a trilogy known as “Three Mothers”.

These are the most illustrative examples of progressive music in Italian cinema, but they are not the only ones. In France, the great Serge Gainsbourg, although he certainly can not be considered a purely progressive rock artist, delivered incredible music to French works of the 1960s and 1970s, such as Cannabis, Le Pacha and La Horse, where his music is close to pop psychedelia, but there are quite a few progressive elements with fancy orchestrations with violins and keyboards. I would not say that these films are something special, but it should be noted that Jean Gabin stars in both of them, who at that time was probably at the final phase of his career.

England, the country that gave birth to progressive rock, was saved for last. In this country, the most well-known bands in the field acted and thrived, and this also happened in cinema. In 1978, Polish-born director Jerzy Skolimowski shot the horror film The Shout in England, a strange and very special horror film, the music for which was written by two members of Genesis, Tony Banks and Michael Rutherford. In this horror film, the star, Alan Bates, known from the Greek film Zorba the Greek, experiments with sounds that are electronically played by two thirds of Genesis at that era. This music is definitely not the highlight of Bank’s and Rutherford’s career, but on the other hand it can not go unnoticed, as it is more electronic / ambient, but the film is one of the best examples of horror films of this decade in which Alan Bates kills his victims with his deafening voice.

Two years later, in 1980, an exemplary gangster film was shot in England, one of the best of its kind in my opinion, The Long Good Friday by John McKenzie, in which the music was written by the founding member of Curved Air, Francis Monkman. His music here is somewhat liberated from music genres. Monkman delivers a really very characteristic score whose basic melody literally sticks to mind, while Bob Hoskins, in his first steps, impersonates a Cockney mobster trying to upgrade London before the theoretically possible, upcoming Olympic Games.

Legendary krautrock pioneers Can to release ‘Live In Stuttgart 1975’

Wednesday February 24th, 2021 News Comments Off on Legendary krautrock pioneers Can to release ‘Live In Stuttgart 1975’