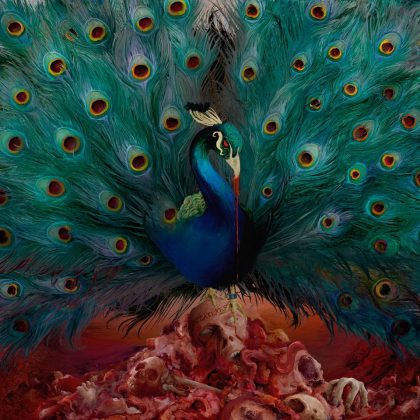 The course of Opeth has made them a favorite topic of discussion with conflicting views for various reasons: artistic, aesthetic or even moral or obsessive for some (if not many). The only thing that’s certain is that every new album of theirs gets the attention of many more than the loyal or non-fans.

After 10 years with Roadrunner records, Sorceress is the first Οpeth album under Nuclear Blast, although this change is of little importance for the contents of their new album. This is an indication of the commercial size of Opeth who are growing and -to some extent- regardless of the acceptance of their music. The first indications of this year’s album were clear: virtually nothing changed since the sudden vintage 70s prog shift in Heritage.

Opeth, as desired by their frontman Mikael Åkerfeldt, have followed a clear progressive rock path, starting since Heritage. The indications so far have revealed a qualitative shift, but based on the beaten track of their mentors. With Sorceress, the band of the moon city (known as ‘Opet’ in the book Sunbird by Wilbur Smith from where they got their name) attempt to further shape their musical character. Do they succeed in doing so?

The answer is yes and no. The title track that was originally released showed a straighter and metal approach, but always based on the progressive rock of Gentle Giant, Camel, King Crimson, Jethro Tull and others. The rest of the album is less metal with the exception of hard rock and a slightly metal approach of Era, while providing the dynamic which was missing from Heritage.

The most important difference with the two previous albums is that some ideas and atmospheres come from the cradle of Watershed, and sometimes from Damnation. I refer to instrumental parts since the brutal vocals are a thing of the past. Listen to Sorceress 2, Will O The Wisp and Strange Brew that unite the past with the present. This element is the successful development of the formulation of the musical identity in paths they have chosen and the bridging with their rich heritage. The substantial playing by Joakim Svalberg on the keyboards has an important role here. Svalberg seems to have adapted to the band’s music and contributes significantly. In one of the album’s highlights, The Wilde Flowers, his playing lifts off the song. Besides, one of the most interesting instrumental songs ever written by Opeth can be found here, the oriental The Seventh Sojourn.

To leitmotiv that the listener meets in Sorceress is calm, low-tempo rhythms alternating with quick bursts either in the guitar parts or on the keyboards and consequently the variety of musical texture. This trick works in Wilde Flowers, Chrysalis and Strange Brew, but like any magic (trick) although impressive, after some repetition it becomes predictable. Here we come to the point where the musical character fails. Repeatability with the obvious doctrines of the 70s greats shows an enthusiastic student who is still based on enthusiasm, but not on his own. The capabilities of Opeth are known and they are excellent students themselves, but there is an impression that the album is tailored to fit the obsessions of Åkerfeldt and although set up correctly, it is limited by a musical “bridle”.

Additionally, some simple structures and ideas are not allowed to flourish, but these are limited and thus not taking off the various compositions. This is reflected in A Fleeting Glance and in some parts of Strange Brew and Chrysalis although these are three of the best compositions here. After continuous hearings, given that after the initial positive assessment, the album fails to become a grower. The production and mixing has a vintage style along with an unnecessary blur which benefits the rich bass lines of Mendez but in 2016 and with the budget of Opeth we could hear something more bulky and adapted to the sound of the ’70s that Åkerfeldt seeks.

In conclusion, Opeth evolve their sound, but not with the exponential rate they had accustomed us in their progressive death metal releases and they are confused with the limitations they themselves pose due to strictly following their idols. Though Sorceress exceeds its forerunners in quality, time will tell whether this music shift will vindicate them.

Åkerfeldt deserves the respect of all for quite a few reasons: excellent guitarist, he built the success of Opeth, he is 100% dedicated to music and after a shift to his favorite 70s heavy prog, he does his hobby and lives the dream. Unfortunately, Sorceress is too hobbistic and fan based. The references in the titles (Wilde Flowers, Chrysalis, The Seventh Sojourn, Strange Brew, A Fleeting Glance) are unnecessary and rather unfortunate, the influences are in some parts annoyingly visible (Will O The Wisp is a very good tribute to Tull) and finally what is missing is musical essence and depth. The trademark solos of Åkerfeldt are absent or do not impress, the basic ideas are mostly poor and what is left is some song parts, the (expectedly) well-worked structure, the executive excellence and the production to save a lot already lost. Reading about the intention of the band to change style in 2010 I was very happy, hoping they’d overcome the much higher stakes in the prog rock field. Unfortunately, from Heritage onwards, it’s 0/3 at the high level.