Legendary Jazz-Rock-Fusion band Brand X has reunited and is preparing to celebrate their reunion with a Fall 2016/Spring 2017 U.S. tour, including a headline performance at Progtoberfest in Chicago on October 21st. Also on this initial run will be shows in Milwaukee, Detroit, Cleveland and Boston to name a few.
Brand X are recognized as true musical pioneers, as they helped create an entire musical genre and influenced a broad spectrum of musicians and bands, from Phish to Dream Theater. They are unrivaled in their creativity, originality and approach. Their contemporaries include bands such as Weather Report, Headhunters, Mahavishnu Orchestra, Jaco Pastorious and Chick Corea, all crafting a unique blend of Jazz, Rock, and Ethic influences now widely known by fans worldwide as Fusion.
Many claim it’s Brand X’s unique combination of masterful chops mixed with their childlike melodies that make so special. Some musicians play from inside their own world, but John Goodsall, Percy Jones, Kenwood Dennard and the guys from Brand X play from their own universe!

REUNION: After years of rumors of a potential reunion, it is finally happening. Three of the four main members came together recently in New York, and according to sources present at the rehearsals, listening to them play was “…like traveling back in time to the legendary ‘Livestock’ album – there was no question this was Brand X! Their sound was uncannily identical to the Brand X of ‘Livestock’ – and that in itself speaks volumes” 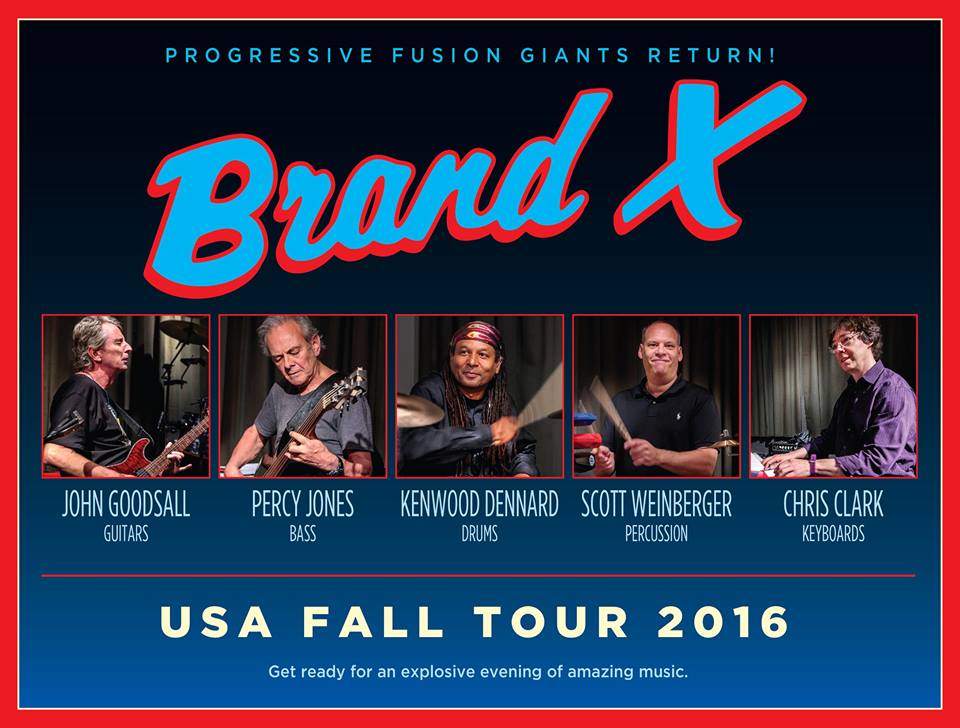 * John Goodsall (Guitars): Original Brand X guitarist says, “It’s a better version now. We’re all a lot more experienced – a lot more skilled… And that goes for every one of us.”
* Percy Jones (Bass): Original Brand X bassist says, “This music takes us back to a certain space – which was really cool. I wasn’t sure I’d ever feel that feeling again – and yet here it is!”
* Kenwood Dennard (Drums): Original Brand X drummer who’s also played with Sting and Jaco Pastorious says, “When we used to play this music, it felt eternal. We used to get into a zone where it felt so deep. Now that’s exactly how it felt again.”
* Chris Clark (Keyboards): Formerly of John Entwistle Band (The Who), and Richie Cannata’s Band (Billy Joel)
* Scott Weinberger (Percussionist): Sessions with Adrian Belew, and live with The Security Project (Jerry Marotta, formerly of Peter Gabriel and Trey Gunn formerly of King Crimson)
The reunited Brand X will be performing material from their first three albums on these initial tours in October and November 2016.