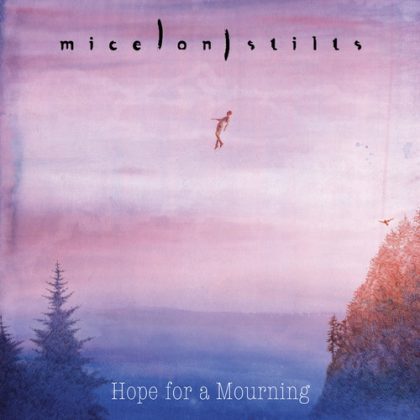 It is only reasonable for Mice On Stilts to attract the interest of open-minded music lovers. The sextet from Auckland, New Zealand has been building their personality beyond the boundaries of music genres since their first steps. The version of indie / art-rock that they deliver is composed of heterogeneous components and the result is an interpretive challenge for the band and an emotional “test” to the public.

“Hope For A Mourning” is their first full-length album after “An Ocean Held Me” EP in 2013, in which we first heard the peculiar inspirations of Ben Morley and the others. The time for the presentation of the album has come, and listening to it becomes even more enjoyable when you actually do not know what to expect.

Sometimes I fail to glean the individual characteristics that make a work of art be considered as important and imposing at the same time. Mice On Stilts is such a case and more specifically their debut full-length album, entitled “Hope For A Mourning”.

Following the formal release of their EP three years ago (although the duration of the material enclosed there does not specify just an EP), Mice On Stilts are back again delivering a sequence of sentimental moments. Moments that are imprinted in the mind and the subconscious of the listener mostly as a whole οr more correctly, as an exceptional and truly coherent sonic result aiming for redemption and by extension, catharsis.

Through developments with controlled and effective complexity and orchestrations with airy space for expression, the band delivers a beautiful lyricism composed by eight songs -elegies. The band’s vision from Auckland, New Zealand is based and finally realized with the cooperation of their six band members and five more guest musicians (!), creating the feeling of a diversified project with several extensions. Elements from jazz, western folk and contemporary classical music, interact combining ‘ 70s progressive rock (King Crimson are you there?) with modern depiction of the latest ’90s styles like those of Radiohead and Steven Wilson (with or without Porcupine Tree and No-Man). Besides, we can hear elements mostly of American bands / solo artists (e.g. Midlake, Bon Iver) who have attempted since the ’00s a revival of 1960s and 1970s psychedelic folk sound.

While managing their inspirations with moderate changes in sound patterns and rhythm, Mice On Stilts are captivating in most part of the LP. One can realise this in the eight-minute emotional uprising of “Orca”, where odes from all types of keys (coming from synths, organ and piano) are ideally combined with both the main riff played on the guitar, and with trumpet themes, viola and cello, with the tempo being determined by “incendiary” percussion and bass. You can feel it even more strongly when you hear them giving priority to the dramatic tone of their music trusting a heartbreaking repeatability, but above all their unmistakable melodic criterion, in “Funeral”… And besides that, it is this timbre and generally the vigorous voice of the vocalist/ guitarist Benjamin Morley, that builds stoically a close relationship with our subconscious, waking spontaneously thoughts and dreams.

On the other side, one could rightly claim that the New Zealanders sound predictable from time to time, since they seem to react unilaterally into the grandiose (minor) melancholy of their compositions. In any case, however, whether Mice On Stilts choose slow-moving executions (as in “Monarch”) or reach peaks of electrical discharges ( “YHMW”), they are convincing for their intentions and the destination of their conceptions, which besides their own redemption, they are offered (among others) for the redemption of their listeners. They show incredible ability to create highly memorable and harmonic tunes, which are ubiquitous in every part of this album. Join them…

The feel of the album and the first spontaneous thought after each hearing relates to the sincerity of the intentions and the fragile psyche behind the music. Through low speeds, the unpretentious lyricism and the rich (mostly acoustic) orchestration, the ambitious vision of Mice On Stilts finds target where the vast majority of modern alternative / post-rock bands fails miserably nowadays. The result is deeply melancholic, though expressively not versatile, especially in the vocal part. The atmosphere of Floyd, the uncompromising prog of King Crimson, the uncompromised experimentation of Kayo Dot and the sensibility of Radiohead dominate an elegant blend art-rock, chamber folk, post-rock and many other sounds. The repetitive pattern and the somewhat predictable second half of the album deprive of the talented New Zealanders that something extra.