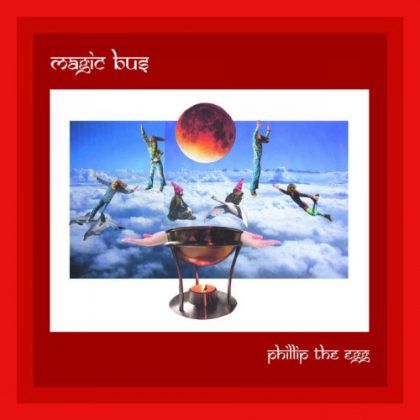 Magic Bus hail from the picturesque town of Totnes of southwest England and weave their otherworldly aesthetic from a musical concept that dates back between the years 1968 and 1973. Based on that, they compose and record their third album, the follow-up of Transmission from Sogmore’s Garden that was released three years ago. The psychedelic mythograph The Electric Kool-Aid Acid Test by Tom Jones could play a supportive role in the whole procedure of the listening session since the formulation of Magic Bus is juxtaposed with works and days of a hippie rock band. The British incarnate the band itself which is a fictional product of the writer, mimicking events of their everyday life. Magic Bus engulf the 1960s West Coast philosophy of the hippie troupe and the extraterrestrial voyage sets off for the third time in seek of adventure.

The fact that the Canterbury scene is on the curriculum for those who consider themselves as progressive rock fans makes perfect sense. The band has delved into Canterbury prog and most notably Gong, Soft Machine and Caravan and secondly into the late 60s psychedelia of Grateful Dead, Jefferson Airplane and Syd Barrett era Pink Floyd. The driving force is once again the duo of Paul Evans (guitar, vocals) and Jay Darlington (keyboards, hammond, mellotron). The line-up is completed by Wihil Mellorz and Conor Spring on the rhythm section (bass and drums / percussion respectively) while Terence Waldstant is responsible mainly for the lead guitars. Finally, Vivian-Goodwin Darke widens the palette of their sound with her flute.

Let us venture to string along with the development of the album, starting with Mystical Mountain. It is a fine progressive epic, arranged in “Canterburian” style with distinguishable hippie / psych nods, where a lurking funky rhythm sneaks in from time to time. The tune is self-divinized once it is halfway its course, when the lyrics have played their part and are gone. The minimal, dreamy instrumental track Fading Light eases the listener into the idyllic poem Trail to Canna. The traveler here is initiated into the Sky Palace (Canna is located in Caribbean and according to Evans it means “sky palace” and the lyrics have to do with the Mayas and especially with a pyramid of their civilization). This mystical masterpiece swings between Canterbury rock and British psychedelia. Evans’ tell-tale voice recites hymns to nature immersed in a Tolkien-ish atmosphere where Darlington’s monumental Hammond rhythms coexist with acoustic and electric guitars. It is the moment where Magic Bus reach the stratosphere of inspiration. The common denominator in the next two songs, Zeta and Distant Future, is the eastern element. The first one develops around a jazzy-eastern rhythm where Evans shares the vocal parts with Darke. Darlington’s keyboards dilate the lysergic atmosphere to infinity, with the Gong and Hawkwind element discreetly present. The line Look to the West and you will see / Look to the East and you will know of Distant Future matches perfectly with the music that links sonically East and West. The rhythm is repetitive and the solid bassline by the amazing Wihil Mellorz steals the show. The spacey background and the Canterbury-like melodies of the magnificent instrumental psych / prog Keppler 22b render the song as addictive as it gets, whereas the tranquility of the (also instrumental) Kalamazoo resounds the beauty of the grounds of the Vale Studios, where they recorded their inspirations. The riff of the closer Yantra Tunnels is based on the legacy of Ozric Tentacles with a simultaneous intrusion of an aesthetic that nods equally to Gong and even Goat.

Magic Bus reopen the Canterbury chapter anew, they reapproach and enrich it, not ridding on the coattails of their first two albums. They won’t milk compositions of the past for all they are worth; instead they record their material driven by inspiration, regarding both the musical and the lyrical department. Their next album will be their landmark one and Philip the Egg is only one stage removed from it.  Deeply charmed!

We Danced round all the Stars, Sang with the Rising Dawn and gave our Hearts to Summer.

Magic Bus do not fall in the category of the musicians that simply scratch the surface of what is called “vintage”. They hit the bull’s eye, bridging the two sides of the pond no less, producing a sublime musical mixture that marries the 60s American Grateful Dead sound with the early Canterbury prog as it was displayed by Caravan, Soft Machine, Khan. The themes, as well as the way they are developed, surprise us pleasantly showcasing how effortlessly they draw on both legendary schools. The arrangements and the production in Phillip the Egg illustrate and highlight the music, making the listening as enjoyable as it gets. With Mystical Mountain as perhaps the high point of the album, Darlington at the top of his game and the inspired keyboards dragging the rest of the band into ambient journeys, they achieve their goal, never sounding out-dated or rambling. Dodging the clichés that would ensnare them in echoing past ideas and repetitions, Magic Bus hand in one of the most beautiful musical propositions for 2017 with abundant zest and devotion in what their collective talent compels them to do.