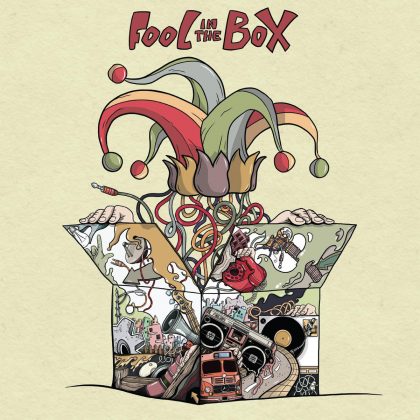 Debut for the Athenians Fool In The Box –formed since 2007– after their much promising last year EP, got the show on the road and taking on themselves the production and promotion of the album, served it on our plate in the end of 2015.  The trio, consisting of Apollonas Avataggelo (vocals and guitar), Agis Vougas (bass) and Giorgos Rados (drums) is here to remind us of the vividness and freshness of alternative 90s rock sound, as well as the results such a blending with the prog element might have.

Through 11 well-worked compositions plus one adaptation, Fool In The Box unfold their virtues as a band and present us all their influences which they have combined harmoniously. The quite dynamic as well as melodious Burning Straw and Charcoal Laces (the Tool element is intense here) which open the album, show that the grunge sound of Seattle and the 90s alternative in general, make up their music  compass. However, the great job on the rhythm section on the one hand and the spotless sharp rhythms and their technical and executive level on the other hand, are enough so as to put them under the progressive umbrella. Especially the crossover prog character and great riff work of Mental Hygiene and Crude (probably my favourite songs from the album) confirm the aforementioned allegation, bringing in mind the fantastic The Beyond and Last Crack who achieved great things in the 90s, being pioneers in this specific sound.

One of the characteristics of Fool In The Box is the variety and the different styles one comes across through their tracks, helping the listener not to get bored for a split second. The quite heavy and somewhat “loose” Rotten Icon, Strip Our Love and Letter to Conceal coexist with the very melodious On Thin Ice and the exceptional Craven Bent, where the Pearl Jam- air and Zeppelin-aura classify it among the top moments of the album. Even the cover of the Beatles’ legendary I want you (She’s so heavy) is so progressive that they almost made it their song, just like the way covers should be and not simple readings of songs. The impeccable work that has been done in vocals throughout the album holds the bar high, even in the simply nice Horses and The Hook that drop the curtain of the album.

Overall, we are dealing with a very fresh work of a band that impresses with the bond and chemistry of the three members, as well as with the maturity of the compositions that at some point makes it hard to believe that it is an emerging band. Their future is promising and if we judge them from the 9 years that separate their formation from the release of their debut album, then we have to admit that we are dealing with well-meaning stubborn ones who don’t give up, so the successor of Fool in the Box is sure to come.

Fool in the Box delivered their first complete work and expectations were met, as the improvement from the first EP is obvious. The vocals and the “tight” playing remain the strongest points of the band, so that the performance of the pieces is almost flawless, full of energy and vitality. The compositions sound fresh, of high level, assimilating dynamic alternative, progressive and grunge elements, yet contemporary. On the plus we can count the inspiring artwork and formidable adaptation on Beatles’ I want you (She’s so heavy).