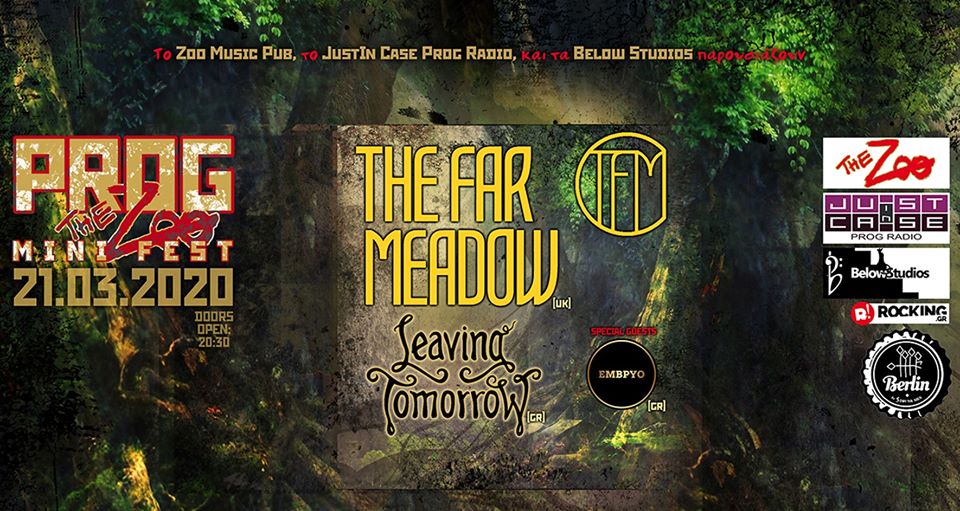 JustIn Case Prog Radio, Below Studios and Berlin by 5 Drunk Men introduce “Prog the Zoo” Mini Fest filling our nights in with progressive rock at the famous Athenian stage The Zoo Music Pub!

The Far Meadow (https://thefarmeadow.bandcamp.com/) is currently one of the hottest symphonic and neo-progressive rock acts of London and the world having already shared the stage with legendary and contemporary artists like Caravan, Carl Palmer, Curved Air, Focus, Gong, District 97 and Wobbler!

What can one say about the 18-minute-long prog epic opener “Travelogue” (https://www.youtube.com/watch?v=UXxQJGOuZkA), the amazing instrument work of all members and Marguerita Alexandrou’s captivating voice reminding us even of … Geddy Lee (RUSH)! Unbelievable! Foreign Land is a prog jewel for this year (2019) and will prog…shadow our dreams for a looooong time!

“Prog the Zoo” mini fest will be completed by eclectic proggers Leaving Tomorrow (www.leavingtomorrow.bandcamp.com) along with prog rockers ΕΜΒΡΥΟ (https://www.facebook.com/embryogr/), both from Athens, Greece, presenting their adventurous works with an emphasis on their upcoming (“Morningdom”, LEAVING TOMORROW) and recent («Κυκλικά Ερείπια» [Circular Ruins], ΕΜΒΡΥΟ) releases!

That will be a night to remember!

Far Meadow is a five-piece progressive rock band from London. Always associated with the best, just lately TFM has been keeping especially good company, stepping out with the likes of Caravan, Carl Palmer, Curved Air, Focus, Gong, District 97 and Wobbler.

Drawing from latest album Foreign Land (Bad Elephant Music 2019), the much-vaunted Given The Impossible (2016), and Where Joys Abound (2012), TFM’s explosive live set is peppered with classics, including the sensational epics Travelogue and Foreign Land, while songs such as Sulis Rise, Himalaya Flashmob, Prove It and The Seamless Shirt herald a new and revelatory era.

With a stunning new album and the experience of knockout shows across Europe, plus appearances countrywide including HRH Prog, The Cambridge Rock Festival and Summer’s End, be sure to catch The Far Meadow as they road-test the next wave of scintillating symphonic classics.

LEAVING TOMORROW is a prog-oriented e(c)lectric trio that was founded in Athens, Greece back in 2002. LT have taken part in numerous live sessions with numerous groups and artists from Greece being famous for their diversely intensive and eclectic prog appearances.

Their music is uniquely diverse with references in the history of rock music, classical music, jazz music and traditional music while, lyrically, their social and personal narrations frequently encounter the poetic side of the moon.

Their self-titled debut album was released by Feedback Sound in the spring of 2009 followed by a digital single during 2012 titled “Daylight and a Lonely Place”. LT have already recorded their second album called “Morningdom” that is about to be released very soon.

EMBRYO were founded back in the early 90s by Spyros Papoutsis (bass), Dimitris Balabanides (keys) and Miltos Makris (guitar) as a 70s-influenced prog rock band including Greek-language lyrics.

Initially, the band focused on conceptual compositions having as goal to release a bunch of albums. Adding Spyros Economopoulos on drums and already having adequate material to present, they appeared on various venues between 1998 and 2000.

At the same time, they made some demos but nothing saw the light of an official album release. In the year 1999 Spyros Papoutsis left the band and Nikos Kandylas filled the bass shoes followed by the departure of Spyros Economopoulos in 2002 initiating the hiatus of Embryo for some time.

In the year 2007, Dimitris Balabanides and Miltos Makris rejuvenate EMBRYO and start working on already existing music pieces. From this reunion, two albums have been released starting with “Kalokairia mesa stin apostasi” [Summers into the Distance] in 2010 and “Kyklika Ereipia” [Circular Ruins] in 2019, an EP titled “Gerikos Helios” [Old Sun] in 2013 and a single, “Karma”, in 2016.

In the year 2019, EMBRYO are excitedly back with their sophomore release “Kyklika Ereipia” [Circula Ruins] available through many e-shops. Simultaneously, EMBRYO are already working on new prrrrrog material and prepare for some prrrrrog-the-world live appearances!