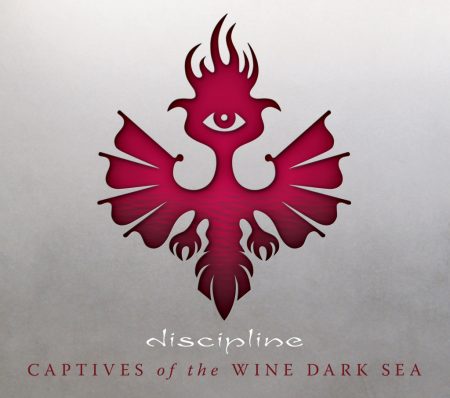 Discipline. is one of those bands that are known to much fewer than those who probably would have liked (but have not yet discovered) them, and for all the lucky ones who already have, this band is a special love. That’s partly because Discipline. are from Detroit, they were founded in 1987 and from their beginning play progressive rock in a “wrong” place and time, that is, but they do it well. In fact, they do well enough to be among the best prog rock bands after the 1970s, even though their presence has not been consistent since their debut Push & Profit (1993). We had to wait 14 years for the release of the successor to the masterpiece Unfolded Like Staircase (1997), the at least equal To Shatter All Accord (2011). Six years later, Matthew Parmenter and his company are back with Captives of the Wine Dark Sea.

Since the announcement of the release of the fourth studio album (fifth, if we include Chaos Out of Order that was recorded in 1988 and released in 2013) of our beloved Discipline., the anticipation was great. Even though Matthew Parmenter’s songwriting style is known to those who follow his band and his solo career, he was never predictable. Without being predictable this time either, the surprises are probably missing from Captives of the Wine Dark Sea, fortunately in my opinion. That’s because it is another gem in the long history of Discipline., based on the unparalleled singer-songwriter compositional and singing style of Parmenter, and a band that sounds very tight, and most importantly substantial throughout. Apart from the leader and the rhythm section of Mathew Kennedy and Paul Dzendzel, Chris Herin (member of Tiles) who has replaced the great Jon Preston Bouda on lead and rhythm guitar is impeccable and plays amazingly, having his personal style and simultaneously respecting his predecessor.

In its entirety, the album is characterized by a partial lack of homogeneity which in places gives an impression of discontinuity. However, some diamonds are found among the individual components once again. The album starts with the impressive The Body Yearns, a 9-minute epic with amazing orchestration and a splendid slow, dark prog part in the middle, before returning to the Hammill-school lyrical vocal melody of the always theatrical Parmenter, whose voice, by the way, is not affected at all by time. Life Imitates Art is the hit of the album, one of the most adorable tracks a prog fan will hear this year, with VDGG’s influence dominating, pleasantly of course, if you take into account how sophisticated this song really is. It’s not a figure of speech: this track can make someone sing it all day long, without being even close to Parmenter’s enchanting performance (sorry babe…). S that follows is the first instrumental of the album with the characteristic King Crimson repeatability and Parmenter on the violin. Love Songs is a catchy bluesy semi-acoustic break, and Here There Is No Soul is a pretty much direct rock piece for the standards of Discipline., which however at some point takes off with the gorgeous vocal melody turning to vintage prog. The Roaring Game, the second and best instrumental piece here, is also based on a loop-like Fripp playing, with the keys building patiently until Herin’s wonderful solo alongside Dzendzel’s inspired phrases on drums. That’s how we get to the long prog epic (14.5 minutes), Burn the Fire on the Rocks, where we find modern melodies integrating flawlessly into classic 70s prog structures, with delightful atmosphere and groove, and an impressive Genesis bridge in the dense ninth minute, before the explosion towards the end with the solos of Herin and Parmenter causing excitement and thrill, up to the so unnecessary fade out (without any exaggeration, the song could comfortably and tirelessly be over 20 minutes).

With Captives of the Wine Dark Sea Discipline. justify the expectations of those who follow them and erase any excuses from prog rock fans who still ignore them. To be more precise, the album is so delightful, it doesn’t really matter that it’s inferior to the two previous ones (with which few prog albums of their time can stand the comparison anyway). At a time when artistic originality, personality and boldness are rare, this band continues to “resist”, led by one of the best prog composers of the last several years. Although being in a “wrong” place and time, Matthew Parmenter proves to us lyrically, musically and aesthetically that when composed by such an inspired artist, traditional progressive rock can be fresh and substantial, abstaining from quixotism and sterile repetition.

Discipline. have a rightful place among the classic progressive rock bands. Expecting something pioneering from them in 2017 would be absurd. Besides, since the beginning of their career they have been strongly influenced by British prog, and especially Van Der Graaf Genarator and Genesis. It was the intense personality and the great songwriting of their leader, Matthew Parmenter that earned them the cult status they have in the prog audience, so if the goal for their new album is to create some more great songs, then they have achieved that easily. The Body Yearns kicks off with its distinct theatricality and adventurous development, while Burn the Fire Upon the Rocks closes the record majestically. Meanwhile, Life Imitates Art is a very catchy song, and the other four compositions are very good, but not quite impressive. Captives of The Wine Dark Sea will excite the band’s fans, since its only obvious flaw is the somewhat dry production.