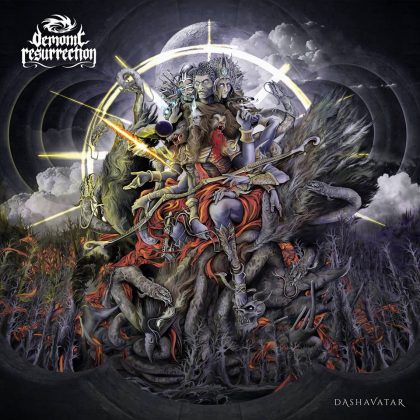 Demonic Resurrection is an Indian band that was formed in 2000 and changed direction from decent but cheesy symphonic to progressive death metal. Featuring members of Demonstealer and Albatross, they released their fifth album that continues into a progressive blackened death vein as in The Demon King (2014), which stood out as their more progressive work till then.

In The Return to Darkness (2010) the symphonic elements had continued to exist from their first releases since 2000, influenced by Behemoth and Dimmu Borgir in the guitar lines, the vocals sound more brutal and some progressive tendencies had revealed. The repeated pattern and the monotone songs did not make them memorable or distinguishable in the genre. Eventually, the band returns after three years with an album that sounds more coherent and mature, their ideas are well-explained now, there is a distinct diversity between the songs and this musical genre seems to fit them more. I do not recall another band from India that intrigued me more.

It is both an honor and a privilege to undertake reviews of bands coming from countries with no particular history or global dissemination of the metal genre. In this case we are dealing with the densely populated and historical India and Demonic Resurrection. With such a band name we could not expect anything less than extreme metal. Death and black have their honor impregnated with progressive structures and ideas.

From a folkloric and mythological aspect Dashavatar is attractive, given the fact that the lyrical content draws its inspiration from the Hindu mythology that always interested me and I did not know particular things about it, while the use of traditional instruments in certain compositions enriches the musical content. For your information, Dashavatar or Dashavatara are ten the versions / personifications (avatars) of Vishnu, one of the major gods of Hinduism, god of conservation and separator/ balancer of earth and paradise.

Regarding the music, the foundation is an alloy of atmospheric black with progressive articulation, accompanied by death metal references executed with classic for the genre and often unnecessary duo clean-brutal vocals (fortunately we usually hear the brutal ones). The rhythm section reminded me of Orphaned Land and Melechesh perhaps due to traditional blends. It is true that the use of sitar, flute and tabla (a percussion instrument like pongos) makes the listener to hear again the compositions containing the described instruments. This is the ace of Demonic Resurrection, the effort to diversify themselves from the classic death / black progressive mold that is processed with the vehicle of the tradition of their country. Additionally, the result matches with the concept / lyrical content of the album and drifts you to the notes of writers and recording of the gods and symbols.

In order to flow their music smoother, the progressive side of Demonic Ressurection (which is not their major side) is expressed through rates changes and alternations of musical envelopes as well as with lead guitar parts. Pleasant touches to some compositions are the keys which help build up the atmosphere. In other compositions of course their contribution is minor. If someone wants to listen to individual songs, Matsya-The Fish, Buddha-The Teacher and Narasimba-The Man-Lion are indicative examples.

We need to point out that the mentioned changes are not quantitatively as many as required in this album. And here we come to the question of whether these tricks are sufficient in order to consider this project, if not original, fresh and refreshing. The answer is not affirmative, unfortunately. Initially, the standard production does not give the required volume, but the main problem is that despite the listening smoothness of Dashavatar, the whole project creates acoustic saturation. Clearly the genre they have chosen to reproduce is a genre that can be easily recycled and considered monotonous or trivial. There are very few compositions that will be inculcated into the listener and basically they are those that graft the Indian music tradition as previously mentioned. The fast pace will cause a mobility in the neck and the listener’s foot but given the overproduction of music, the aim is to stimulate the brain and not just the limbs of the body.

Eventually, do Demonic Resurrection constitute a comprehensive proposal for fans of extreme sound? Yes and no. If the listener is searching for well played extreme sound, then yes, it is a worthwhile proposal that is beautiful due to these traditional components. If the purpose is listening with body and soul and the stimulation of the spirit, then it is not. Any good ideas are not enough for the legacy of the band.

This is the strongest release for the band.  Right from the beginning, you realize that the compositions and style differ from those of previous releases, as their style has shifted to a progressive blackened melodic death metal. The Hindu mythology as central theme fits to their death metal aggression completing their sound that offers originality and self-characterizes them. The compositions are those of typical death metal dynamics with interesting ideas, varying complex riffing and grimy growls. The sporadic clean vocals that appear along with the keyboard layering and the extended guitar solos highlight the progressive elements of the album. The guest female vocal parts add to the symphonic elements but are also the weakest moments into this album. There is diversity in every song and therefore each song has its own personality. To conclude, the Indian elements are well incorporated and the new direction that DR should stick to for their future releases concerning their sound has finally found.