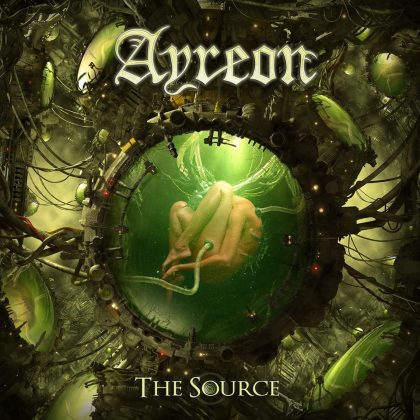 Mr. Lucassen, with the multifarious personality, has been giving us concept metal operas for over 20 years. It is characteristic that he takes care of everything from the initial concept, the lyrics and the compositions. In his many years of venture, he gathers a host of talented voices that inspire his musical work. In The Source we have in random order Tommy Karevik (Seventh Wonder, Kamelot), Hansi Kürsch (Blind Guardian), Russell Allen (Symphony X), Tobias Sammet (Edguy), Nils K.Rue (Pagan’s Mind), Tommy Rogers (Between the Buried and Me), James LaBrie (Dream Theater), Michael Eriksen (Circus Maximus), Michael Mills (Toehider), Simone Simons (Epica), Floor Jansen (Nightwish) and Zaher Zorgati (Myrath) in a small role. With such a quality cast that is not the best possible though compared to Ayreon’s earlier releases (we miss voices like Eric Clayton, Tom Englund or Mikael Akerfeldt), expectations have been born for Ayreon’s devotees.

Is the star setting?

The opener The Day That That World Breaks Down, which is the first composition that was presented in the media, has responded to the aspirations of the fans, since it is an impressive 12-minute composition that contains all the singers in their role in the disc concept. The music is quite progressive compared to what we hear on the rest of the 2 CDs, with blues points and alternating flirting prog rock with metal, accompanied by cello, piano and violin.

Before commenting on The Source’s musical ensemble, let’s refer to the concept of the album that refers to Ayreon’s previous work, and in particular it is a precursor to 01011001. It  tells the story of the Alpha planet in Andromeda’s galaxy, where the engines that feed it turn against humans, forcing them to move to another planet (called planet Y), reinforced with the chemical element “The Source” to survive in the aquatic environment of their destination, communicate with telepathy and increase their life expectancy. In short, a dystopian, futuristic and not so original story.

In terms of the music, having introduced the listener to your universe with an exquisite composition, there must be either inexhaustible inspiration or pluralism in order to persuade him to stay with you for almost 90 minutes that the 2 CDs offer us. Unfortunately, neither is true. Lucassen had stated that the present work is based more on guitars than Ayreon’s previous albums, and there would be no problem with it if they were not so metal-centric with a diffused and powerful power element and filler heavy metal riffs. When you balance between your statement about progressive material and your desire to present a more catchy metal material, there is a risk that you can founder. Although the refrains are thoughtful and some compositions will be hummed, the music carpet for example in Run! Apocalypse! Run! instead of being playful, it will be regarded as childish and cheesy. On the other hand, listening to All That Was, which is distinguished by its rock character with progressive touches ending through its folk sounds, you realize that the weight has wrongly leaned towards the heavy / power metal side. In Human Equation, which, according to the writer, is Ayreon’s top creation, the tug-of-war equilibrated and the result was balanced (beyond more inspired).

The trap that Mr. Lucassen has been caught in is that most of the ideas have been heard before, while the astral concept along with some musical points are reminiscent of his other project, Star One. Additionally, if the selection included more progressive structures and bridges, as we have heard in the past of Ayreon, the material would be more interesting; however, musical blends which are encountered, contribute to the local unduly expansion of the material rather than its normal diffusion into the entire album.

Of course, to be fair with The Source, it’s not all negative. Some singers make the most of them, like Tobias Sammet, who is not exactly my favorite, but  he gives very convincing interpretations, along with Michael Mills, who in his backing vocals and in his  plain role he performs in the album, he gives another dimension and it is wrong he is  unknown to the wider audience. I would also like to mention the contribution of Simons, Rue and Eriksen, who, although they have power metal tones, they belong to the material. Personally, I would like to hear Karevik more, and the mixing of Allen’s voice seems to me to be poor. Special mention should be made to the outstanding guest musicians Guthrie Govan and Paul Gilbert, who are embellishing some compositions with their talent. Finally, the wind instruments, the cello, the piano and the violin improve the whole, adding diversity to the result.

So what is the conclusion? In order to satisfy curiosity, it is suggested to listen to the album, but it does not reach the standards of performance of Ayreon’s top creations due to the lack of polymorphism. New listeners may be impressed, but let them go back to the past. Mr. Lucassen, you may need a break or a temporary change of course.

The Source does not deviate from the constants governing Lucassen’s musical influences: from progressive influences of the 70s to AOR, metal riffs and intense use of keys. The beautiful compositions that are built on familiar materials are an expected feature of the album as well as the lack of surprises. The extended addition of folk influences is probably a new feature that offers the basis of many pieces. But the parade of so many well-known singers is once again impressive, although it is true that the performance of the songs is shrouded in the context of telling the story of science fiction that is faithful and sometimes at the expense of music (the sharp clipping of songs is annoying). The Source, following the familiar beaten track, is an album that despite its long duration does not lose its charm but does not manage to offer anything new and that may not be the purpose of the band.

The new album of Ayreon out on April, 28