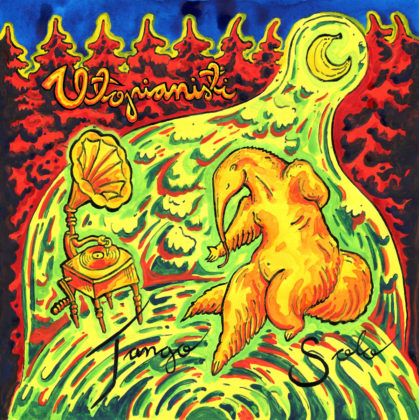 In recent years we have become accustomed to the so-called one-man bands, which, although they offer us mostly highly technical music, at the same time we find stylistic introversion and egocentrism of artists who take themselves more seriously than they should. Most of the times they fail to offer emotional fulfillment to the listener and the general connection with them. Markus Pajakkala belongs to the bright exceptions deserving the listeners’ admiration and excessive delight. His five albums under the name Utopianisti are examples of his complex talent, his limitless, unpredictable and uncompromised compositional ability, bridging various music genres. The last time we were pleasantly surprised was in 2016 with the amazing The Third Frontier and this year the time has come for another great album.

Every successful experiment is necessary

Four years after Brutopianisti it’s time for a new chapter, a new proposal. The title Tango Solo leaves no room to wonder about the subject, so it remains to discover the level of performance and management. Tango is a national musical – and dance – genre that includes with passion through its characteristic kinesiology and rhythmic latin essence. Here, however, it serves as a base. Having already gotten a first taste of his flirtation previously (in Tango Succubus part 2 from Utopianisti II), Pajakkala develops and explores all possibilities. In a sophisticated way, he adds generous doses of Frank Zappa, avant-prog, the Canterbury scene and humor. The instruments that dominate, apart from the accordion, are wind instruments, xylophone, piano and various percussions that subtly keep the rhythm so that emphasis is given to the melody and harmony, depending on the requirements of each piece. Thus, he deconstructs and rebuilds a well-made recipe with the same comfort, with freshness and inspiration.

The opening El Progenitor acts as a trailer for what is to follow and impresses from the first seconds with its imaginative mood changes. La Hazaña Postnatal del Jabato that follows is more nightmarish and intriguing with melodic layers and winds raging in the background. After the quiet Anoche Into (accordion solo) we move on to Anoche Soñé Con Algún Pedro, a sweet and nostalgic piece based on a phrase played on bass clarinet. The same correlations apply to Uvas Verdes Sin Semillas (piano solo here) and El Nuevo Comienzo with winds giving a romantic mood and melancholy. After an inward turn, the circle closes just as it opened. The remaining compositions show a rare sensitivity. Every note counts, the orchestrations are meticulous, the harmonious progress is unpredictable with a strong element of surprise. We end up with a homogeneous record and perhaps the best moments are El Progenitor and Wakaresaseya. The duration of the compositions is short but enough for the development of the themes and the buildup of the dynamics. The production is exemplarily lively, as befits the general style and the aesthetics and atmosphere of chamber music. All instruments are played by Pajakkala himself with an unmistakable sense of general artistic vision.

Based on its peculiar music tradition and its inseparable links with the progressive scene in the past, the present and (as it seems) the future, Finland continues to give us artists and albums of exceptional quality. The previous reference to Zappa was not accidental and appart from that, several moments throughout the discography of Utopianisti owe to the great Pekka Pohjola. The theoretically unusual use of tango (for a prog album) as the main vehicle of expression is judged as a bet and a challenge that is won, thanks to Pajakkala’s talent and imagination. His consistency is reflected in every release, transform every challenge to it impressively into success. In times when music is an escape and an antidote, the need for releases such as Tango Solo is highlighted. One of the best albums of 2021.

After the impressively exuberant The Third Frontier and the rather unfortunate Brutopianisti, Utopianisti, the project of Finnish multi-instrumentalist Markus Pajakkala, returns with the fifth album titled Tango Solo. The extravagant brutal experiments are fortunately a thing of the past, as Pajakkala returns to instrumental avant / fusion prog, a sound which few modern bands perform so successfully. For the first time in the band’s course so far there’s not any guest appearance here, with Pajakkala taking over all the instruments. Consisting of 10 compositions and with its duration ranging to 35 minutes, Tango Solo, as its title testifies, is like a journey with the melodies of Argentinian tango with an intense RIO sound. The key ingredients remain Frank Zappa’s musical heritage and humor, the avant-prog of Samla Mammas Manna and Pekka Pohjola and jazz / fusion in general, all dipped into a soundtrack atmosphere with the technical level being once again above all expectations. It is very difficult to single out a single track as the album flows effortlessly, however the opening El Progenitor is a very good example of what Pajakkala wants to achieve here. Overall this is an album of very high quality that puts Utopianisti back in the right track.